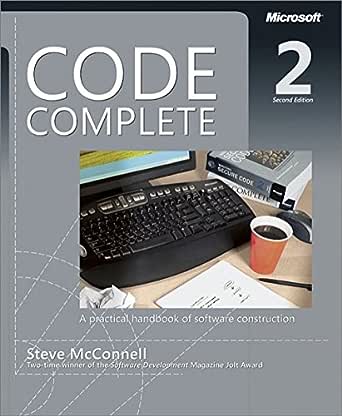 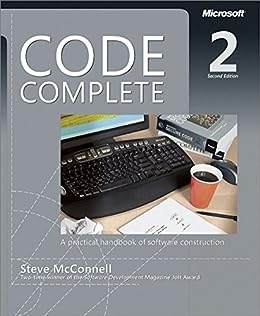 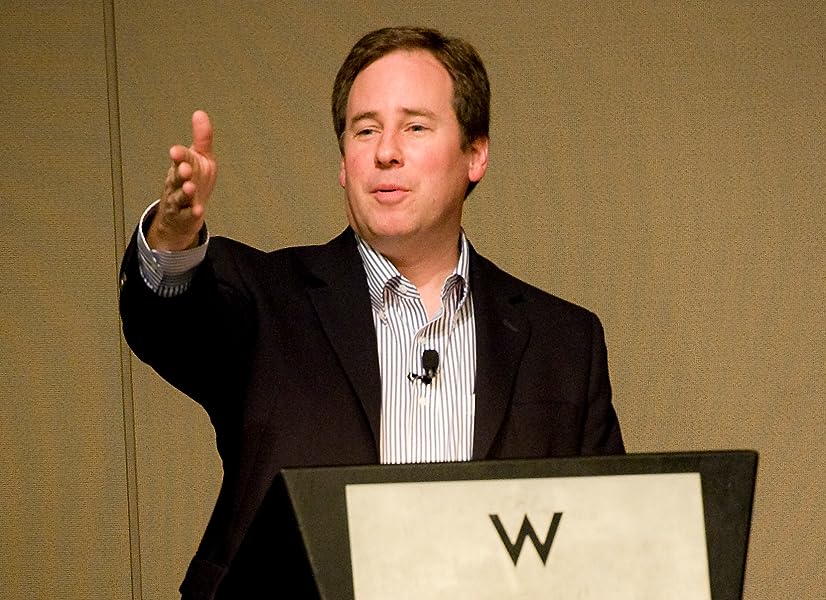 4.6 out of 5 stars
4.6 out of 5
701 global ratings
How are ratings calculated?
To calculate the overall star rating and percentage breakdown by star, we don’t use a simple average. Instead, our system considers things like how recent a review is and if the reviewer bought the item on Amazon. It also analyses reviews to verify trustworthiness.

Simon Booth
3.0 out of 5 stars Good in its day
Reviewed in the United Kingdom on 16 June 2019
Verified Purchase
Code Complete is a good collection of advice and insight into the practice of developing software, but even the second edition shows its age and much of the advice seems a little antiquated now. In particular the focus on adhering to a waterfall-like process in early chapters seems thoroughly inappropriate in the modern world - even with the 2nd edition's nods to the new-fangled agile methodologies the kids are using and the suggestion that the appropriate level of detail for the requirements and design phases depend on the type and size of the project (which is fair).

Some of the detailed nuts and bolts advice on construction is sound but in this day and age it seems odd that it needs saying as nobody would consider doing otherwise (would they?). For instance multiple injunctions to consider maybe possibly using source control are hopefully no longer doing useful work on the reader.

The notion that Visual Basic is a credible choice of programming language also seems peculiar now, but I can't remember a time when that wasn't true 😜 You can easily spot sections that are new or revised in the 2nd edition because they are aware that C# exists.

The book still gives a good overview of a range of topics, though many of them are covered better and in more detail in other books like The Pragmatic Programmer, Refactoring (Fowler) and Clean Code (Martin) . I'd like to say that this book is a good introduction and starting point, but without a refresh to bring it more up to date it's not an easy pitch. I'm not sure there's anything that's as comprehensive but more up to date though?

The Golden age of books about the art and craft of software engineering does seem to be behind us... I guess with all the resources available online now there's not enough of a market, but blog posts and video tutorials can never quite replace the insight you get from reading the thoughts of an experienced programmer who's spent time thinking about what they do and how they do it, and on consolidating those thoughts into a doorstop for communication. There is a perspective, a world view, a joined up pattern of ideas presented here that is more than the sum of the occasionally questionable parts, and there's value in that.
Read more
16 people found this helpful
Report abuse

Benedict Carey
5.0 out of 5 stars Definitely worth a read
Reviewed in the United Kingdom on 24 May 2012
Verified Purchase
I'm really not sure if I'm a veteran or not, writing rubbish code since I was a kid in the 80s and getting paid for it for the past couple of decades.

This book is worth a read for all of us, at any level. Ok, maybe a beginner wouldn't get it, but if you've been hacking code long enough to know the modern languages are abstractions and simplifications of what came before then you'll read through the parts that seem less obvious.

Maybe or maybe not a spoiler, but if in doubt, try writing a test case, see how it pans out. Simple and obvious. Most of what is in this book is simple and obvious, but then we do all need that pointing out often and frequently!

It's not a bible of coding, there is no such thing, but it is something we should all have a go at. I didn't rail against anything Steve had to say (unlike, say, Cooper), but that isn't to say he or I are right. I do think he is sticking to making sensible observations about what he thinks is worth saying from a lifetime of coding, as oppose to trying to be exciting. For that alone, I recommend him.
Read more
7 people found this helpful
Report abuse

Amazon Customer
5.0 out of 5 stars A very good introduction to non-computer sciency programming
Reviewed in the United Kingdom on 8 October 2019
Verified Purchase
If you are looking for a good introduction to take your basic programming skills to the next level, this is definitely your go-to friend! Great book. I bought it a number of years ago when I was a first year undergraduate and I have really gotten good use out of it. I would definitely recommend this book to a friend.
Read more
Report abuse

Sam
5.0 out of 5 stars Why is this not in your library?
Reviewed in the United Kingdom on 16 April 2017
Verified Purchase
Every software developer should read this book.
Every company that develops software products should have this in their library: you do have a library of software development books don't you?
This last should be the 13th Joel Test.
Read more
2 people found this helpful
Report abuse

M. Little
5.0 out of 5 stars Teaches you how to really program
Reviewed in the United Kingdom on 25 October 2018
Verified Purchase
I find this hard to describe how good this book is. A standard coding book would describe how to write a class in C#. This book tells you why you would write a class. It's more of a programmers philosophy. It's quite profound and I love it.

Massive read though :)
Read more
Report abuse
See all reviews
Back to top
Get to Know Us
Make Money with Us
Let Us Help You
And don't forget:
© 1996-2021, Amazon.com, Inc. or its affiliates