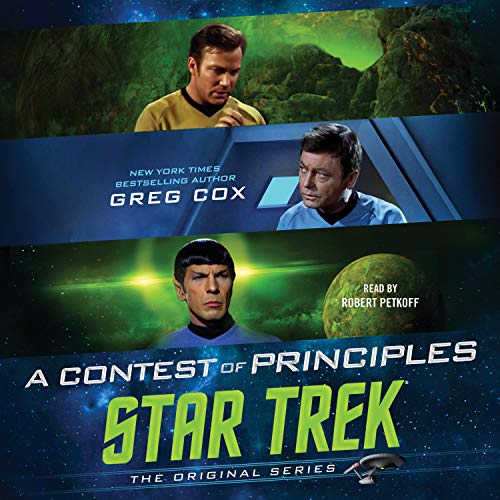 A Contest of Principles: Star Trek: The Original Series

4.6 out of 5 stars
4.6 out of 5
158 global ratings
How are ratings calculated?
To calculate the overall star rating and percentage breakdown by star, we don’t use a simple average. Instead, our system considers things like how recent a review is and if the reviewer bought the item on Amazon. It also analyses reviews to verify trustworthiness.

Marko Nörenberg
5.0 out of 5 stars Diving into the Classic Trio
Reviewed in Germany on 1 December 2020
Verified Purchase
One of the core tenets of TOS is the friendship of Kirk, Spock and McCoy, and how they play off each other. There are good episodes and novels where 1 element of this ego/id/super-id trio is temporarily removed.

This novel, which is a compelling political tale about three planets, separates all three from one another. Greg Cox skillfully renders the story and the character's thoughts so you can tell where the absence of e.g. McCoy from Kirk's mission or Spock from McCoy's make a difference. The character is defined by the consequence of their absence, instead of just their actions and contribution to dialog. I loved that!

Plus, the novel is fast-paced without having to rely much on explosions and shootouts. Rather than featuring a high Sci-Fi concept this time, it focuses on the struggle of societies with their politics, holding up a mirror to present-day democracy without pointing at a particular nation, culture or ideology.
Read more
Report abuse

Julie
5.0 out of 5 stars Back to 1966
Reviewed in the United States on 15 November 2020
Verified Purchase
Greg Cox seemed to have fun writing this book. He wrote it as though the storyline was a 1966 TOS episode, complete with campy costumes for the aliens. Everyone, of course, spoke English. McCoy and Spoke bickered, but not as much, which was refreshing. The various plots were not complicated, but the characters who are so fun were there and given plenty of dialogue. It took me awhile to realize that Mr. Cox had done this deliberately. There were only a few things that tipped me off to the fact that it was written recently, vs 54 years ago. Someone drank latte. Another character played mindlessly on a tablet. Other than that, this was a very realistic new 1966 TOS episode. Would I recommend this? I buy ST novels in advance, so I'm not the one to ask, but I'm not complaining. It was fun. One plotline involved an election, so reading the book the second week of November 2020 was funny.
Read more
10 people found this helpful
Report abuse

T Ray
5.0 out of 5 stars Fresh Trek!
Reviewed in the United States on 15 January 2021
Verified Purchase
A CONTEST OF PRINCIPLES is a new Star Trek TOS novel from author Greg Cox. I purchased for myself with a gift card I got for Christmas and I’ve devoured the novel. My wife says I’m a notoriously slow reader and she was surprised at the alacrity with which I finished this novel. Within the first three chapters of this novel, I was transported to my childhood watching Star Trek TOS on my 13″ rabbit-eared television in my bedroom after school.

My imagination was aglow with the striking red, blue, and gold of the Enterprise crew’s uniforms and the tell-tale background sounds of the Enterprise bridge that let the viewer know that this is no ordinary television show. You are now far-flung into humanity’s bright future!

The author does a fantastic job capturing the voice of our triad of heroes Kirk, Spock, and McCoy, as the story is told from each of their three perspectives: Kirk on the planet Vok struggling to complete his mission on behalf of the Federation and this fledgling democracy, Spock on the planet Bracon leading a party to investigate the mysterious abduction of Dr McCoy, and Dr Leonard “Bones” McCoy, trapped on the planet Ozalor waging an internal battle to honor is sense of compassion and the Hippocratic Oath or to answer the call of his indomitable spirit and see to his duty to escape and return to the Enterprise.

Nurse Chapel plays a prominent role in the story and, as I was reading, Majel Barrett’s voice and visage sprang to life in my mind’s eye. Additionally, I had the luxury of watching the performances of William Shatner, Leonard Nimoy, and DeForest Kelly as the story unfolded in my imagination as if I were watching an episode of a full-color television show produced 50 years ago!

It was my honor to host Nichelle Nichols, George Takei, Jame Doohan, and Walter Koenig as well and we were having the time our lives! Special guest stars in this story are the security and tactical officers Levine and Godwin who, after meeting them for the first time in A CONTEST OF PRINCIPLES, I would demand to have at my side on every away mission — red shirt or not!

If you’re a fan of great morality tales, pertinent allegories, and true Star Trek science fiction I can’t recommend this novel highly enough. This is the first Star Trek novel I’ve read in more than 25 years and I can’t believe that I’ve been sitting around grousing about things I’ve seen streaming on television when I could have lived the life of an imagination connoisseur and delved deeply into these sorts of novels that contain my favorite characters on the most famous spaceship to ever grace the world’s consciousness.

So, if you’re looking for a great time and a way to cleanse your palate, so to speak, pick up A CONTEST OF PRINCIPLES and give your imagination a whirl!
Read more
One person found this helpful
Report abuse

Kevin G.
1.0 out of 5 stars Another Lackluster Novel in a Series of Lackluster Star Trek Novels
Reviewed in the United States on 25 February 2021
Verified Purchase
I remember a time not so long ago when most every Star Trek novel I read was at least entertaining, if not out right exciting. Unfortunately, the last half dozen or so of the more recent entries I've purchased have been pretty uninspired. Since the last Greg Cox ST novel was one of the better ones in this downward spiral, when I saw this new work of his had almost all 5 star reviews, I thought I'd give it a go. Unfortunately it's pretty unforgettable and hard to stay interested in. Infact, I gave up about 70 pages in when nothing note worthy happened. Some other reviews commented that it was a throwback to some classic Trek episodes. Yeah, maybe, but some of the least memorable ones. The story is completely void of any sense of awe or wonder. Or even social relevance. Save your cash and buy some used old school ones.
Read more
2 people found this helpful
Report abuse

Joyce Wallace
5.0 out of 5 stars Enjoyable Read
Reviewed in the United States on 17 December 2020
Verified Purchase
As always, Greg Cox did a great job bringing the beloved original Star Trek characters to life. Ready for the next one, please.
Read more
3 people found this helpful
Report abuse
See all reviews
Back to top
Get to Know Us
Make Money with Us
Let Us Help You
And don't forget:
© 1996-2021, Amazon.com, Inc. or its affiliates