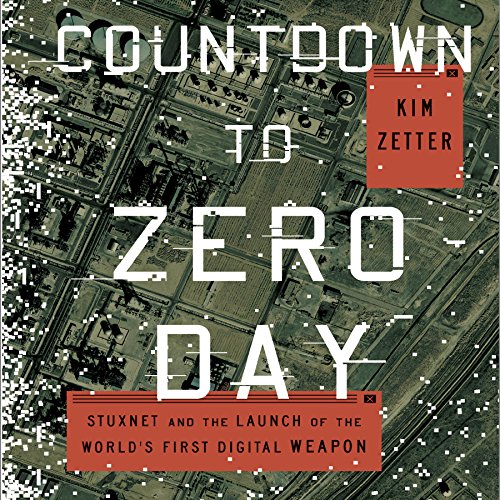 Countdown to Zero Day: Stuxnet and the Launch of the World's First Digital Weapon

4.7 out of 5 stars
4.7 out of 5
675 global ratings
How are ratings calculated?
To calculate the overall star rating and percentage breakdown by star, we don’t use a simple average. Instead, our system considers things like how recent a review is and if the reviewer bought the item on Amazon. It also analyses reviews to verify trustworthiness.

Robert D. Crane
4.0 out of 5 stars If you are a technology person then you'll certainly enjoy the depth and detail that the bool provides
Reviewed in Australia on 3 January 2016
Verified Purchase
A really thorough treatise of the Stuxnet malware and the later ramifications it has generated. I felt the booked jumped around a little bit when swapping back and forth between the major players and the actual timeline as well as the affected targets in Iran.

If you are a technology person then you'll certainly enjoy the depth and detail that the bool provides, especially when it comes to the footnotes. The author has done a great job pulling all the sources and information together and making it readable by all.

If nothing else, this book should demonstrate what is digitally possible in the world we live in today and how afraid we should be about what could be unleashed tomorrow that could have ramifications far beyond what we think. We live in a digital world and that now too is under attack and being threaten like any battlefield of the past. The only thing now is that there are no longer any borders.
Read more
Helpful
Report abuse

talha mujaddidi
3.0 out of 5 stars Review of book
Reviewed in Australia on 29 July 2021
Verified Purchase
Its a good read. Gives you information about stutnex virus and its fallout. However, there's not much inside as far as a geopolitical or current affair contxt is concered. Should have had quotes from people involved and some relevant inside.
Read more
Helpful
Report abuse

commentator
4.0 out of 5 stars Cyberwar - well-written, well-researched, well-reasoned
Reviewed in the United Kingdom on 3 December 2015
Verified Purchase
This book tells the story – or at least part of the story – of Stuxnet, the malware that was employed allegedly by the US and Israeli intelligence services to disrupt Iran’s nuclear enrichment programme in the late 2000s. Some have described it as the first case of cyberwar, but actually, it was more the first spectacular case of international state-on-state cybersabotage, and part of a wider campaign against the Iranian programme that also included the targeted assassination of Iranian physicists and the imposition of sanctions. In the end, Stuxnet was only one piece in the jigsaw puzzle that led to the June 2015 diplomatic accord temporarily closing the road to an Iranian nuclear bomb.
Kim Zetter does a superb job in telling how Stuxnet was detected, analysed, dismantled and neutralised. An accomplished journalist for WIRED, the technology newspaper cum blog, she clearly excels at unfolding this intriguing and captivating narrative. The book is well researched, and Zetter is at her best when she is explaining complex technicalities such as ripping apart and reverse-engineering a malware code. The true heroes of her book are the analysts and researchers of Symantec, Kaspersky and other security research firms. These sections of the book are highly readable; and she writes with a lay, and not an expert audience in mind – which adds to the readability. Woven into this first part of the book is an excellent chapter on how the zero-day market came about in the first place. Zetter also does a good job when highlighting how these valiant private sector cyberwarriors had to strike a balance between protecting their clients – i.e., neutralising Stuxnet – and avoiding the cross-fire of a state-on-state confrontation.
Zetter’s story is so sound and authentic as she can draw extensively on interviews she held with the heroes of her book. The story becomes much thinner when it comes to the “other side”, i.e., the manufacturers and distributors of the malware – or, for that, its targets, i.,e, the computer and machinery operators in Iran. There, she entirely relies on public sources and on what others have already written about the topic. She does that diligently and exhaustively, after proper research, as it befits a good journalist. And given the fact that this deals with the murky world of intelligence where interviews are not lightly given, she probably had no alternatives. Yet, as a consequence, these parts of book lack the authenticity that has the part outlining the story of Stuxnet proper. She closes the book with a highly readable chapter on assessing the success of the malware. She concludes that Stuxnet was a qualified success in the sense that it contributed to slowing down the Iranian enrichment programme, which bought diplomats time to negotiate. Yet, it remains unclear whether this was actually the goal of Stuxnet, or whether it did not have a further purpose, such as forcing the total shutdown of the Iranian enrichment programme. Given her limited access to government sources, Zetter cannot answer this question. She also concludes that this ‘qualified success’ of slowing down Iran’s programme came at the price of exposing the US as a reckless promoter of cyberwar, thus undermining her own credibility on the international stage on the one hand and –more importantly – undermining the trust of users in the safety and security of the internet on the other hand. Maybe this is a bridge too far, as most people outside the US would already have a view of the US being rather double-minded when it comes to the internet and the utility of cyberwar, but regardless to the depth of international cynicism, she clearly has a point here.
The book has a few weaknesses. First, it is too long. On many instances, the narrative could be shorter and crisper. Sometimes, one gets a bit the feeling she wanted to make as much use of her interview material as possible. Secondly, and this may be related to the first point, the structure of the book is somewhat repetitive. A great part of chapters in the first part follows the same pattern: introducing a technie nerd, describing him (they are always “hims”) and his physical appearance and dress a bit, adding a few sprinkles about his private life (mostly on girl friends), and then delve into that part of the technical dissection of Stuxnet which this chapter is about– and this deep dive is then deep indeed. This makes the reading attractive at the beginning, as it gives a very low entry barrier to the average reader, but it becomes somewhat tiring further down the road. These are weaknesses you can easily live with as a reader. A worthwhile, highly recommendable read in any case.
Read more
12 people found this helpful
Report abuse

Peter Smith
5.0 out of 5 stars Excellent
Reviewed in the United Kingdom on 27 April 2021
Verified Purchase
This is well written, very accessible narrative of Stuxnet. That will appeal to the more technical reader. I was impressed by the detailed description that Zetter included, without hurting the narrative of the book. The length of the reviews on the page is evidence enough that people read it carefully and felt the need to share. Hugely recommended.
Read more
Report abuse

Beefox
4.0 out of 5 stars It is all the better for it
Reviewed in the United Kingdom on 31 March 2016
Verified Purchase
I bought this because I wanted to know more about the Stuxnet virus and the potential implication that it was created by western government(s) to sabotage the Iranian nuclear program. Incredibly interesting, and seemingly very few stones left unturned (as others have said, many references provided throughout).

I somewhat sat on the fence to start with, erring on the side of caution that governments could create such things and the dangers they could unleash. As I read on though, I couldn't help but be impressed at the ingenuity that these people must have gone to. Iran seems to be perceived in the media as a hard done by nation that's always being picked on. However, if your nation is having to hide nuclear complexes from the IAEA, design them to make them missile proof or if you conveniently 'forget' you had specific centrifuges then you probably deserve all you get...

This book doesn't seem to be a negative take on the issue of cyber-weapons, and remains impartial and well balanced. It is all the better for it. It discusses the business of zero day exploits and how they are (may?) traded between persons and government, with many hacks being held back for whatever reasons.

Edmund Kemper
5.0 out of 5 stars Enjoyed this book!
Reviewed in the United Kingdom on 2 December 2017
Verified Purchase
Excellent book. I first saw a documentary about the subject and I just had to learn more about Stuxnet. I have read a couple of books on US foreign policy towards Iran (and its main enemy Saudi Arabia) and this book complimented those books very well. It amazes me after all these years that US and western media still presents Iran as a threat to world peace even though US and Israel actions - which are described in this book - are nothing more than acts of war.
Read more
Report abuse

Mr. M. Hassan
5.0 out of 5 stars Definitive book on Stuxnet
Reviewed in the United Kingdom on 29 December 2014
Verified Purchase
This book reads like a thriller. What I was most impressed about was the amount of notes cited after each chapter. It just shows how much effort went into the whole book. The other aspect which is brilliant is that it doesn't just focus on the Stuxnet virus and that's it: it literally uses references from all the important people that had been brought into contact with it. This enables you to get a complete understanding about the virus's creators; what happened once the virus was released and most importantly - the implications from it.

Honestly if you've just heard of Stuxnet you really would want to read this: you'll be blown away by it (metaphorical joke there).
Read more
Report abuse
See all reviews
Back to top
Get to Know Us
Make Money with Us
Let Us Help You
And don't forget:
© 1996-2021, Amazon.com, Inc. or its affiliates