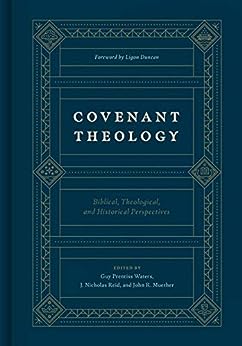 A Comprehensive Exploration of the Biblical Covenants

This book forms an overview of the biblical teaching on covenant as well as the practical significance of covenant for the Christian life. A host of 26 scholars shows how covenant is not only clearly taught from Scripture, but also that it lays the foundation for other key doctrines of salvation. The contributors, who engage variously in biblical, systematic, and historical theology, present covenant theology not as a theological abstract imposed on the Bible but as a doctrine that is organically presented throughout the biblical narrative. As students, pastors, and church leaders come to see the centrality of covenant to the Christian faith, the more the church will be strengthened with faith in the covenant-keeping God and encouraged in their understanding of the joy of covenant life.

Guy Prentiss Waters (PhD, Duke University) is the James M. Baird Jr. Professor of New Testament at Reformed Theological Seminary, and was formerly an associate professor of biblical studies at Belhaven University in Jackson, Mississippi. Guy and his wife, Sarah, have three children.

J. Nicholas Reid (DPhil, University College, University of Oxford) is associate professor of Old Testament and ancient Near Eastern studies, as well as the director of the hybrid MDiv program at Reformed Theological Seminary, Orlando. He is also a contributor to the Cuneiform Digital Library Initiative. Reid and his wife, Blair, live in the greater Orlando area with their four children. He is a member of St Paul's Presbyterian Church.

Ligon Duncan (PhD, University of Edinburgh) is chancellor, CEO, and John E. Richards Professor of Systematic and Historical Theology at Reformed Theological Seminary. He previously served as the senior minister of the historic First Presbyterian Church in Jackson, Mississippi, for seventeen years. He is a cofounder of Together for the Gospel, a senior fellow of the Council on Biblical Manhood and Womanhood, and was the president of the Alliance of Confessing Evangelicals from 2004-2012. Duncan has edited, written, or contributed to numerous books. He and his wife, Anne, have two children and live in Jackson, Mississippi.

Kevin DeYoung (PhD, University of Leicester) is the senior pastor at Christ Covenant Church in Matthews, North Carolina, and associate professor of systematic theology at Reformed Theological Seminary, Charlotte. He has written books for children, adults, and academics, including Just Do Something; Crazy Busy; and The Biggest Story. Kevin and his wife, Trisha, have nine children.

4.9 out of 5 stars
4.9 out of 5
38 global ratings
How are ratings calculated?
To calculate the overall star rating and percentage breakdown by star, we don’t use a simple average. Instead, our system considers things like how recent a review is and if the reviewer bought the item on Amazon. It also analyses reviews to verify trustworthiness.

Parentsof4
5.0 out of 5 stars Every New Christian should start here.
Reviewed in the United States on 6 April 2021
Verified Purchase
Its easy for new Christians to get caught up in the snares of false doctrines, this book can defiantly help keep you on the narrow "middle" path. Yes, its somewhat academic, but with an internet connection/dictionary, its easy enough to follow along with and look up the theological words and terms you may not be familiar with. A great in-depth look and historical overview on how to view scriptures from the lens of Gods covenants or promises to his people.
Read more
One person found this helpful
Report abuse
See all reviews
Back to top
Get to Know Us
Make Money with Us
Let Us Help You
And don't forget:
© 1996-2022, Amazon.com, Inc. or its affiliates