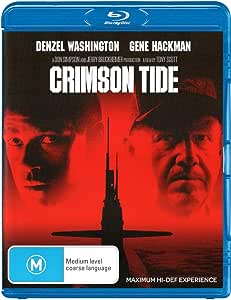 Amidst a global crisis, the USS Alabama is ordered to launch its nuclear missiles - signalling the start of World War III! And when the sub's commander and his executive officer clash over the validity of their orders, an epic struggle for control erupts under the sea. Superstars Denzel Washington and Gene Hackman face off in the intense action-thriller Crimson Tide, now on Blu-ray Disc. Viggo Mortensen and James, Gandolfini also star as the "full-throttle tension" (Los Angeles Times) builds relentlessly in this pulse-pounding format! Watch every explosive frame in spectacular 1080p, while 5.148 kHz, 24-bit uncompressed audio blows you away. See, hear and feel the "Tide" rage through the power of Blu-ray'" High Definition!

4.7 out of 5 stars
4.7 out of 5
1,201 global ratings
How are ratings calculated?
To calculate the overall star rating and percentage breakdown by star, we don’t use a simple average. Instead, our system considers things like how recent a review is and if the reviewer bought the item on Amazon. It also analyses reviews to verify trustworthiness.

Brendan Nicholls
5.0 out of 5 stars This is one film that's worthy of your time
Reviewed in Australia on 5 November 2020
Verified Purchase
Delivered in perfect condition and competitive price. Crimson Tide is a strong thriller only handicapped by the studio mandated conclusion. Strong cast of heavyweights and up and coming actors. I really wanted the extended cut but sadly couldn't find on 1080. Disney needs to start pushing out 4k for their extensive Touchstone films.
Read more
Helpful
Report abuse

Old Grim's Reviews
TOP 50 REVIEWER
5.0 out of 5 stars One of the best movies of the 90s.
Reviewed in Australia on 8 March 2019
Verified Purchase
Crimson Tide is an absolute stand out, even to this day. An all-time favorite for me. With amazing performances by Washington and Hackman, as well as a younger Viggo Mortensen, the movie which helped him become Aragorn years later, believe it or not.
A war movie that is an absolute thriller and is loosely based on actual events. If you have never bear witnessed to this fantastic movie do youself a favour and add this to your collection! You will not be disappointed.

Patricia Simmons
5.0 out of 5 stars A flash back to the past
Reviewed in Australia on 26 September 2020
Verified Purchase
Ahhh ! Denzel Washington. This being one of his first movies would have definitely set him on the path to a great career. He stand out even against Gene Hackman who also plays a great role. love it, love it love it.
Read more
Helpful
Report abuse

JD Ch-le-St
3.0 out of 5 stars MUTINY UNDERWATER
Reviewed in the United Kingdom on 22 January 2017
Verified Purchase
I rated this 111 min REGION B/2 DVD as ok, I enjoyed the film although the beginning was a little slow, good acting by Denzel Washington and Gene Hackman but the story line was a little far fetched.
No nonsense combat veteran Captain Frank Ramsey (Hackman) and his newly installed first officer Ron Hunter (Washington) are caught in the middle of a global crisis. On board a nuclear submarine they're heading for Russia where radical nationalists are threatening to start World War 111. But when they receive an unverified message to launch their missiles, Ramsey and Hunter clash over the validity of the orders. With nuclear holocaust close at hand, mutiny erupts on the sub-pitting the entire crew against each other in a showdown that will decide the fate of the world

M. J. Smitten
5.0 out of 5 stars You can easily predict the outcome
Reviewed in the United Kingdom on 5 January 2016
Verified Purchase
You can easily predict the outcome, but the actual end of the story is satisfying. The acting is as good as it gets and various twists and turns keep your attention. Overall a good movie is you like action drama. There is a lot of swearing but it is in context. It says 15 so I suppose standards have changed but I wouldn't watch it with a 15 year old daughter not necessarily because of the four letter words but some of the references in jokes might need explanation I would not want to be required to give.
Read more
3 people found this helpful
Report abuse

Amazon Customer
5.0 out of 5 stars Great film - great book..to be consumed in that order.
Reviewed in the United Kingdom on 19 April 2018
Verified Purchase
The dilemmas of military command are at the heart of this story - reminiscent of A Few Good Men. Made hugely entertaining by the fantastic performances of Washington & Hackman. Full of suspense and challenges you to consider impossible decisions and the validity of nuclear deterrence.
Read more
3 people found this helpful
Report abuse

Amazon Customer
3.0 out of 5 stars Exciting stuff but don't take the characters too seriously
Reviewed in the United Kingdom on 8 February 2017
Verified Purchase
A gripping story made even more terrifying now we have a lunatic in the White House. Characterisations are weird and not particularly believable, but I guess that is meant to add to the human dimension of the movie. It's not meant to be a documentary, after all! Personally, I don't find it credible that anyone with the manifest personality defects of the captain would get within a thousand miles of commanding a nuclear sub, but then I never dreamt that the US would ever put Trump in the White House.
Read more
2 people found this helpful
Report abuse

T C
4.0 out of 5 stars Great movie.
Reviewed in the United Kingdom on 28 August 2018
Verified Purchase
The movie is superb and relies heavily on its soundtrack. However, the sound on this version, bought from the 3rd place market source was not great. I will give this to charity and buy the Blu Ray version.
Read more
One person found this helpful
Report abuse
See all reviews
Get FREE delivery with Amazon Prime
Prime members enjoy FREE Delivery and exclusive access to movies, TV shows, music, Kindle e-books, Twitch Prime, and more.
> Get Started
Back to top
Get to Know Us
Make Money with Us
Let Us Help You
And don't forget:
© 1996-2020, Amazon.com, Inc. or its affiliates