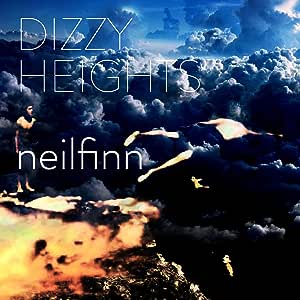 Secure transaction
Your transaction is secure
We work hard to protect your security and privacy. Our payment security system encrypts your information during transmission. We don’t share your credit card details with third-party sellers, and we don’t sell your information to others. Learn more
Details
Ships from
Amazon AU
Sold by
Amazon AU
New (5) from
$32.99 FREE Delivery on first order.

Produced by Dave Fridmann (Mercury Rev, The Flaming Lips), 'Dizzy Heights' is the third solo album by Neil Finn following 1998's Try Whistling This and 2001's One Nil. Finn did not set out on his third solo album with a theme in mind. But by the time he came to call it after another track on the record, "Dizzy Heights", it had become inescapable. "It crept up on me. I started noticing it in lots of places. You start off with a number of different threads and angles and demos, and they dictate the terms of the record. It's only in the course of the process that you maybe get a feeling there's a type of song emerging, or an atmosphere." Neil Finn was 18 when he was invited by his older brother Tim to join the trailblazing art rock band Split Enz. His career since might be measured as a series of bounds, the best-known being Crowded House, which he founded with Paul Hester and Nick Seymour after the breakup of Split Enz in 1984. Four albums, among them Crowded House and Together Alone, brought the group popular and critical acclaim around the world. Along the way, there have been a host of collaborations, including with brother Tim and wife Sharon, and an array of names from Johnny Marr, Ed O'Brien, Eddie Vedder and most of Wilco. And yet Dizzy Heights unmistakably marks a fresh leap. "I didn't want to make it a solo record in a stripped back singer-songwriter sort of way," says Finn. "I had a feeling Dave would be good at adding some odd shapes to the music. Which I always welcome - making things a little more expansive. . . He is good at subverting things, and making things sound a bit messed up and not as obvious, rather than being too tasteful, which is always a temptation".

3.9 out of 5 stars
3.9 out of 5
99 global ratings
How are ratings calculated?
To calculate the overall star rating and percentage breakdown by star, we don’t use a simple average. Instead, our system considers things like how recent a review is and if the reviewer bought the item on Amazon. It also analyses reviews to verify trustworthiness.

Ampersand
4.0 out of 5 stars You can't go wrong with a bit of Finn!
Reviewed in the United Kingdom on 8 August 2018
Verified Purchase
Pretty much an album from the Finn family! (Wife plays bass, one son on guitar, the other on drums!)
Always time for the songs from Neil Finn
Well worth a listen and sounds great on vinyl
Read more
Report abuse

Helena B
5.0 out of 5 stars Gets better and better the more you listen to it.
Reviewed in the United Kingdom on 8 January 2015
Verified Purchase
I bought this CD prior to seeing Neil Finn live in Birmingham. Different to his earlier work but no less brilliant, really helped by hearing the same songs live in concert. The stand out song for me is Divebomber, followed by Better than tv and Pony ride. I know it's often said but this album really is a grower. Great stuff.
Read more
2 people found this helpful
Report abuse

B. J. du Cille
4.0 out of 5 stars A grower!
Reviewed in the United Kingdom on 12 April 2014
Verified Purchase
Neil Finn was always a favourite songwriter of mine when he was in Crowded House. I was thinking that he must have given up the business but this new album really grows on one with repeated plays.
Read more
Report abuse

iamthevoodomonkeyman
4.0 out of 5 stars It's still growing on me but I like it so far.
Reviewed in the United Kingdom on 7 May 2017
Verified Purchase
This is a bit of a grower and a bit of a new direction for Neil but I'm really starting to like it. Recommended and much more interesting than his newer Crowded House efforts.
Read more
Report abuse

Grandpoombah
5.0 out of 5 stars Excellent service & product, thanks! +++++
Reviewed in the United Kingdom on 5 October 2014
Verified Purchase
Excellent service & product, thanks! +++++
Read more
Report abuse
See all reviews
Back to top
Get to Know Us
Make Money with Us
Let Us Help You
And don't forget:
© 1996-2021, Amazon.com, Inc. or its affiliates