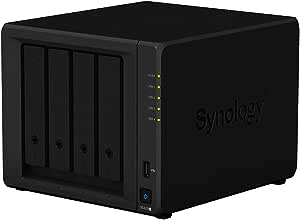 Visit the Synology Store
4.9 out of 5 stars 78 ratings
Secure transaction
Returns Policy
Your transaction is secure
We work hard to protect your security and privacy. Our payment security system encrypts your information during transmission. We don’t share your credit card details with third-party sellers, and we don’t sell your information to others. Learn more
New (4) from $789.00 & FREE Delivery

4.9 out of 5 stars
4.9 out of 5
78 global ratings
How are ratings calculated?
To calculate the overall star rating and percentage breakdown by star, we don’t use a simple average. Instead, our system considers things like how recent a review is and if the reviewer bought the item on Amazon. It also analyses reviews to verify trustworthiness.

Meow!
5.0 out of 5 stars A polished product that is just excellent. Highly recommended.
Reviewed in the United Kingdom on 18 January 2021
Style Name: EnclosureCapacity: EnclosureVerified Purchase
DS420+

The frame is very open so while nice and cool is not the quietest of NAS' but I have mine in another room so it's never an issue. I would say it is about as noisy as your average laptop can be when the fan starts running and of course the particular type of disk will affect noise greatly. If the NAS is going to be in a living area then you need to prioritise noise when buying disks.

Plugging the NAS in to your network, I used my router to see the address but there is a NAS location utility you can download from Synology. You then enter the address of the NAS in your browser and the introductory screen pops up. You can not get any further without installing at least one disk. Once a disk or disks have been popped in the drive bays the NAS takes you through setup, which starts with downloading the OS. The NAS offers to do all this automatically but I would advise you not to do that. It's better to select what apps you want rather than to just accept all the stuff Synology throws at you. Also you need to read the Synology page about SMR before you do anything to decide how you want the drive(s) formatted. I wanted to use something called JBOD which does not use SMR and so I had to wipe the disks and start again.

The interface is very Windows like, and very friendly. Everything is nice and easy although Synology offer little help. Fortunately Youtube is awash with videos on how to do things. The NAS is an amazingly powerful product. Synology has a website that offers dozens and dozens of apps you can run on the NAS. These days a NAS is far more than just a NAS, it can run backups, torrents, streaming, you name it, it even supports various programming languages. I advise you to search for the Synology page and check that the NAS you intend to buy can run the app you need. The "plus" variants can run more apps than the non plus so it's pretty important you check before you buy.

Once the disks are formatted you can go back in to the NAS and start adding folders and making them accessible on the network. These just appear on a Windows network as folders under the name you gave your NAS. From that point on you really don't need to do much else with the NAS. You can just access those folders and use PC software to perform backups or whatever you want the NAS for. But you can then go on to install whatever apps you might want for additional functions, like streaming and so on.

Personally I set mine up to power up at eight in the morning, do backups once a week, offer file services all day, then power itself down at midnight. Not much but it all was very simple to do and worked flawlessly, even updating it's own software as needed. It can do so much more.

During those operations I have never seen it require more CPU or memory than it has, but I bought the 4GB memory upgrade anyway, since there is a Crucial compatible that is really cheap. Why not? That was recommended and sold by Amazon which I think was £26. Crucial CT4G4SFS8266 4 GB 1 GB DDR4 2666MHz 260-Pin SO-DIMM Memory. Again there is tons of info on the web about that.

Connecting the two ports as an aggregated port showed minimal increase in performance. However, exploring this option, this seemed to come down to the seek time of the drives I was using. There was such a performance hit when two PC’s accessed the NAS at the same time the least of the problems was the network speed. However, there wasn’t a performance hit either, so no reason not to implement aggregation. With a faster raid configuration or faster drives/cache then there may be some reason to implementing it. I think the usefulness probably comes down to your specific requirements and other equipment on your network.

It's a very polished product and while it might seem expensive, to my mind what you are buying here is the excellent support you are getting in the way of applications. Synology are a bit lacking in information but that's made up by the users on the internet who enthusiastically make videos left right and center.

Dr Dave
4.0 out of 5 stars Not cheap and you are paying for all the apps really.
Reviewed in the United Kingdom on 4 January 2021
Style Name: EnclosureCapacity: EnclosureVerified Purchase
This is a nice piece of kit with lots of apps that you can download onto the unit such as a media server, back-up server etc. The device has two NMVe slots to add cache and a DDR SODIMM slot for memory upgrade. HOWEVER, they recommend that you only use their memory, which is about 8 (!!!!) time the price of equivalent reputable memory from say Crucial or Kensington. That is just a rip off.
The processor is only a dual core Celeron, which I feel is quite under-powered for a £450 NAS (without drives).
It is very flexible, I set it up as a three disk RAID 5 media server and a single disk back-up server for my PCs.
You are definitely paying for the software that they supply, so if you aren't going to use a lot of it, then maybe look for another equally good supplier who doesn't charge so much for the hardware.
Read more
Report abuse

Strat Man
5.0 out of 5 stars these are amazing
Reviewed in the United Kingdom on 8 August 2020
Style Name: EnclosureCapacity: EnclosureVerified Purchase
this is an amazing piece of kit.. i just love it.. its hyper fast easy to use. And i can access all my kit from home.
Read more
One person found this helpful
Report abuse

D. J. Owen
5.0 out of 5 stars All I could ask for
Reviewed in the United Kingdom on 21 January 2021
Style Name: EnclosureCapacity: EnclosureVerified Purchase
Easy to set up and use. Comes with excellent software.
Compact and with no noise. Glad I got this.
Read more
Report abuse