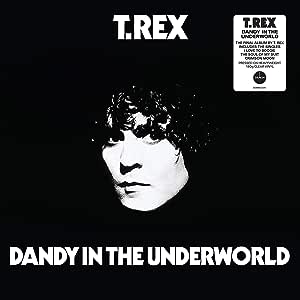 Secure transaction
Your transaction is secure
We work hard to protect your security and privacy. Our payment security system encrypts your information during transmission. We don’t share your credit card details with third-party sellers, and we don’t sell your information to others. Learn more
Details
Ships from
Amazon AU
Sold by
Amazon AU
New (9) from
$34.09 FREE Delivery on first order.

Dandy In The Underworld (Clear Vinyl)

Limited 180gm clear vinyl LP pressing. This, the final official Marc Bolan and T. Rex album, was conceived during a turbulent time in rock history. Issued on 11 March 1977, Dandy In The Underworld arrived in the wake of The Damned's 'New Rose' And The Sex Pistols' 'Anarchy In The UK', singles that had given the emerging punk rock a national platform. To promote the album, Bolan undertook a tour of the UK and Europe, with support from The Damned, who acknowledged T. Rex as a big influence. With a new T. Rex line-up, Bolan had already scored a # 13 hit single with "I Love To Boogie", and followed this up with single releases of the title track of the album, "The Soul Of My Suit" And "Crimson Moon", before culminating with the exuberant "Celebrate Summer", tragically the last single to be issued in Bolan's lifetime.

4.7 out of 5 stars
4.7 out of 5
124 global ratings
How are ratings calculated?
To calculate the overall star rating and percentage breakdown by star, we don’t use a simple average. Instead, our system considers things like how recent a review is and if the reviewer bought the item on Amazon. It also analyses reviews to verify trustworthiness.

Berny272
5.0 out of 5 stars Probably the most underrated album in the world... ever!
Reviewed in the United Kingdom on 13 July 2019
Verified Purchase
An album that highlighted that Marc Bolan was back. My 2nd favourite LP of all time. From the surrealistic underground world of Dandy to the future dystopia of Teen Riot Structure; every song is lyrical genius and musical gems and includes Bolan’s last Top 20 hit. This masterpiece is just a glimpse of what might have been. Despite the musical snobbery that surrounds everything that isn’t Electric Warrior or The Slider, I remember my sheer joy in ‘77 that Marc was back to his best. Listen and judge for yourself - it’s a classic! Whilst I mourn what we missed, I celebrate what we have.
Read more
18 people found this helpful
Report abuse

KCY
5.0 out of 5 stars Brilliant album
Reviewed in the United Kingdom on 8 August 2018
Verified Purchase
One of t-rex best albums,just a shame was his last one. As all fans would clearly state he was on way back to the top when this was released. Sound quality beautifully remastered. Remember having this on the vinyl years ago so brings back good memories
Read more
11 people found this helpful
Report abuse

Amazon Customer
5.0 out of 5 stars Brilliant!
Reviewed in the United Kingdom on 31 August 2019
Verified Purchase
The great Marc Bolan’s Final album.
Full of beautiful lyrics, great musicianship and wonderful arrangements. A good indication that Marc was back to his best just before his tragically early death.
Read more
5 people found this helpful
Report abuse

Ampersand
5.0 out of 5 stars Nice sounding clear vinyl edition of T.Rex’s last album
Reviewed in the United Kingdom on 10 October 2020
Verified Purchase
The last official T.Rex album, this album hints at the magic Bolan would have continued with had he not tragically died.
Released during the punk era, there’s not really much punk in the sound, just punchy pop that’s well played by Bolan and band.
The vinyl edition recreates the original design well, but although the sound is great I’m not sure this is a new remaster.

(Note: sadly the album arrived with a damaged/ripped sleeve (but still sealed), suggesting that the damage was caused in the warehouse not in postage/transit)
Read more
Report abuse

Funsize
5.0 out of 5 stars Sheer quality from the Prince of Players
Reviewed in the United Kingdom on 10 September 2016
Verified Purchase
This remastered album is every thing and more that l hoped it would be. The bonus cd of alternative takes makes for really interesting listening and shows just how much Bolan was back on form in the quality of song writing, arrangements and musicianship of the band. There is not a duff track or note on the original studio album. It is such a shame that Marc died so tragically just a few short months after this album's release. To all Bolan fans of old and those open minded enough to enjoy the music of the 70's go buy this an give yourself a treat. Prince of Players indeed.
Read more
7 people found this helpful
Report abuse
See all reviews
Back to top
Get to Know Us
Make Money with Us
Let Us Help You
And don't forget:
© 1996-2021, Amazon.com, Inc. or its affiliates