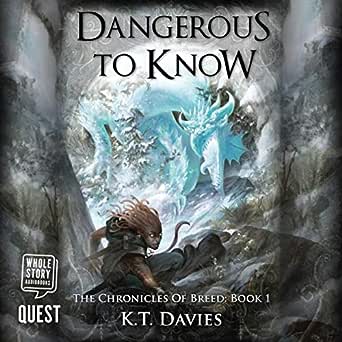 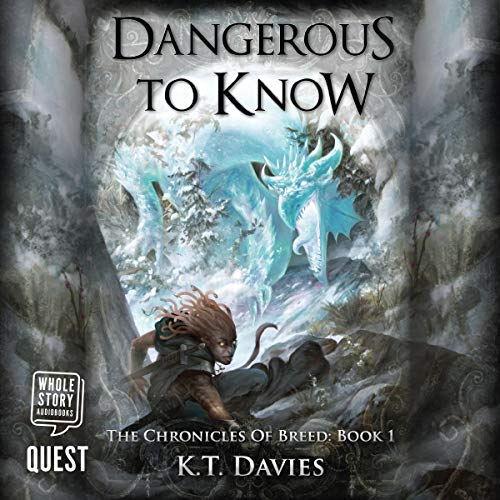 Dangerous to Know: The Chronicles of Breed, Book 1

4.4 out of 5 stars
4.4 out of 5
603 global ratings
How are ratings calculated?
To calculate the overall star rating and percentage breakdown by star, we don’t use a simple average. Instead, our system considers things like how recent a review is and if the reviewer bought the item on Amazon. It also analyses reviews to verify trustworthiness.

Georgina Makalani
5.0 out of 5 stars An amazing ride
Reviewed in Australia on 31 August 2019
Verified Purchase
I loved every moment of this book. It is beautifully written, sucking you immediately into Breed’s world as he leaps (or is flung) from horror to horror, usually of his own making.
Amidst demons, priests, his frightful mother and a flock of vengeful chickens, Breed is on a journey of a lifetime, or at least for his life.
This story is full of twists and turns that will have you on the edge of your seat and laughing out loud.
Can’t wait to see where it goes next.

The audio book is well worth a listen, although be warned there are some strange pauses that can be a bit off putting.
Read more
Helpful
Report abuse

This is the best read I have had in years.

I want to tear into book two right now - even though it is 3am.

The worst part about this book: was believing that I had bought this book as part of a box set. When it isn’t. Note to self; don’t buy more than one book in a sitting. It can get confusing.

The things I liked most: This would have to be the most refreshing fantasy read that I have made since reading R.A. Salvator series on Dritz. Whilst it isn’t quite as dark as that work, it was seriously as fast paced and intriguing. So if you’re a fan of his, you’ll love this work just as much.

It’s one of those books that you don’t care how much they cost to buy, you’ll buy them!

P A DEWS THOMSON
4.0 out of 5 stars Well-written, but does not break new ground.
Reviewed in Australia on 21 August 2019
Verified Purchase
Hesitated between three and four stars. Well-written (as is so often not the case) and well-paced plot. Moves along nicely. I may be harsh in saying it meets but does not escape from all the usual epic fantasy narrative conventions - I've read a lot of fantasy, and this hits all the standard motifs (thieves guild, world in peril, low-life narrator with inner sense of honour...). Well done, but not novel.
Read more
Helpful
Report abuse

Deb T
5.0 out of 5 stars Exceptional writing style, love the anti-hero approach
Reviewed in Australia on 16 August 2018
Verified Purchase
I thoroughly enjoyed the adventures and mishaps of Breed. Almost an anti-hero, Breed ruffles some significant feathers and makes some unlikely friends along his way to a kind of redemption......maybe. The writing style of KT Davies is well above average, and will keep you enthralled throughout Breed's first book. I loved it and immediately downloaded the next 2 books in the series. I highly recommend it!!!
Read more
Helpful
Report abuse

Smackasaurus Mex
4.0 out of 5 stars Fast paced self aware light reading
Reviewed in Australia on 19 August 2018
Verified Purchase
Great for a bit of light hearted, turn-the-brain off reading when you just want a bit of escapism without having to remember a cast of thousands or a dozen subplots.
Read more
Helpful
Report abuse

Mrs. K. F. Creer
5.0 out of 5 stars Most refreshing new fantasy series in decades!
Reviewed in Australia on 11 October 2018
Verified Purchase
Brillianly written, exceptional character development, has humour, pathos and keeps you on the edge through the entire book and then leaves you wanting more.
Read more
Helpful
Report abuse

Julie
5.0 out of 5 stars Really enjoyable book
Reviewed in Australia on 9 August 2018
Verified Purchase
Moves along at a great pace, loved every bit of it. Now going to download the next one. Highly recommend it.
Read more
Helpful
Report abuse
See all reviews

Mr. Mark Jones
4.0 out of 5 stars It takes a few chapters to adapt to her style, but then it gallops away.
Reviewed in the United Kingdom on 25 September 2018
Verified Purchase
Firstly, It is not insignificant that the author has a great command of English. However much she uses colloquial speech, she is almost completely grammatically correct, which is a blessed relief in these days of bad translations from otherwise talented foreign authors. I only stumbled over one line in the entire book that was dubious, she must have an excellent editor.
The book takes a while to "get into" because the writing style, and indeed the protagonist, are unremittingly grungy. The world where it all happens is not atypical fantasy, but the limitation on magic being madness makes for an interesting dynamic.
The protagonist himself is only partially sympathetic, an almost lovable rogue with a psychotic mother and an unfortunate characteristic of being "dangerous to know".

The book also contains some of the best insults I can recall reading, mostly relevant to the world in question, so you won't be able to use them in day to day banter. Which is probably a good thing, they might get you arrested.

Andy Angel
5.0 out of 5 stars Grimdark With A Side Order Of Fun
Reviewed in the United Kingdom on 4 April 2018
Verified Purchase
Now, I like Grimdark fiction and I like a good chuckle too. Thankfully Dangerous To Know is jam packed full of both.
Our Hero(?) is certainly not what you would expect but is kind of endearing in a strange way and the world Breed inhabits is really well realised.

This is the kind of story the phrase 'rollicking good read' was made for.
Read more
22 people found this helpful
Report abuse

J. Smith
3.0 out of 5 stars For 99p you can't complain
Reviewed in the United Kingdom on 1 September 2018
Verified Purchase
I'm struggling to dislike this book, but then I am struggling to love it. Best description seems to be 'it's OK'. A fantasy adventure with the 'usual' cast of warriors, wizards and demons which trundles along a fairly well trodden path.

The 'difference' here is that the hero is a villain and whilst there is a lot to be said for a plot having a good villain, the first person narrative means that a lot (possibly replace with all) of the descriptions of places and characters concentrate on the negative. Now whilst this can be funny (although to be honest not laugh out loud funny) it does leave us with a world that is difficult to like/care about - therefore I didn't really give a (insert your best insult here) if the outcome was favourable or whether the whole world was destroyed (which it clearly isn't as there are two more books currently in the series!)

I did enjoy the writing and the prequel short story and novella which can be obtained by signing up to the authors website are well worth reading, so for 99p I can't really complain.
Read more
7 people found this helpful
Report abuse

Mr Kibbles
5.0 out of 5 stars A Fresh Breed of Adventure
Reviewed in the United Kingdom on 30 August 2018
Verified Purchase
[I reviewed the previous edition a few years back; my opinion hasn't changed in the meantime]
Short and bloodthirstily good. No, not me - or not just me - but KT Davies' ripping shaggy-demonspawn yarn.

Half human, half thoasa, Breed is the eponymous protagonist of this tale, permanently on the run, or landing in some sort of trouble, getting knocked out, imprisoned, bonded to a rather drippy priest, or raised from the dead by a demon bent on world domination. Stuff happens, and Breed lands in a whole acre of posterior-pickle rather frequently. In fact the author packs in as much action as you'd expect to find in a book twice the length, and still finds time and space for both world-building and plot machinations - which is a good thing. A well developed history it is too, with Breed chasing the Hammer's Hammer only to discover that... well, you'll have to find out for yourselves on that one.

The idea of the paradox of magic is another excellent idea, well-developed and used, as is the "apporting" apparatus (with more than a nod to Stargate too). The multi-leveled city of Valen is a fun location (for varying definitions of "fun", dependent on whether you are Breed or not...). Appleton is most definitely a place that all roads lead from.

Breed is an interesting character too. Self-centered and self-motivated, definitely, but also an honest narrator and as prone to make mistakes as the next person. An alarming tendency to be knocked unconscious, mind, but since that does move the plot along, we'll forgive that...

It may stand somewhere on the borders of Grimdark, but I'd say Breed is better than that. I thought it was illegal for fantasy to be this much fun. :)
Read more
3 people found this helpful
Report abuse

Adele
5.0 out of 5 stars Bloody brilliant
Reviewed in the United Kingdom on 4 April 2018
Verified Purchase
I love this book. Well written grimdark with a wicked sense of humour. The lead Breed is singularly dishonest and unpleasant yet oddly likeable. The book is a masterclass in fun fantasy romps, originality and some subtle writing. And if you are confused by contradicting genders for Breed in reviews, no gender izls ever given, but then Breed is half Thoasa so who knows if itbeven applies.
Read more
8 people found this helpful
Report abuse
See all reviews
Back to top
Get to Know Us
Make Money with Us
Let Us Help You
And don't forget:
© 1996-2021, Amazon.com, Inc. or its affiliates