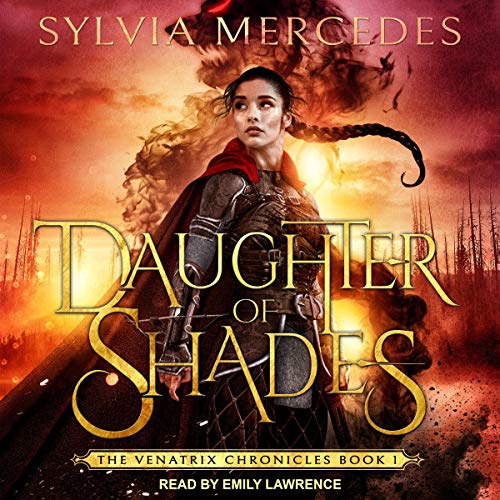 4.3 out of 5 stars
4.3 out of 5
240 global ratings
How are ratings calculated?
To calculate the overall star rating and percentage breakdown by star, we don’t use a simple average. Instead, our system considers things like how recent a review is and if the reviewer bought the item on Amazon. It also analyses reviews to verify trustworthiness.

BooksAndYass
4.0 out of 5 stars Deliciously dark fantasy
Reviewed in Australia on 29 July 2019
Ayleth lives side by side with her shade (think Mr Kindly OR Eclipse from Nevernight). She's a fully qualified venatrix (soul reaper) and after apprenticing for years she's desperate to rise in the ranks and when the perfect (and of course HIGHLY DANGEROUS) opportunity arises to move ahead she takes it 🙃

In summary, the book is a dark, deadly delight that I'm excited to read more of
Read more
One person found this helpful
Helpful
Report abuse

Jenny Schwartz
TOP 500 REVIEWER
5.0 out of 5 stars Dark Fantasy
Reviewed in Australia on 13 August 2019
"Daughter of Shades" by Sylvia Mercedes has a fabulous cover and a story to match! This is a fantasy novel with action, an interesting heroine, great world building and a thread of slow burn romance.
Read more
One person found this helpful
Helpful
Report abuse

Charlotte's reviews
TOP 1000 REVIEWER
5.0 out of 5 stars great first book!
Reviewed in Australia on 15 August 2020
really refreshing! Love the storyline, ticks all the boxes. Strong female lead, fantasy world, danger, suspense. It was nice to read something a bit different, similar to shapeshifters but its own special twist. Looking forward to reading this series.
Read more
Helpful
Report abuse

Gregory
5.0 out of 5 stars Fantastic imagination of this author
Reviewed in Australia on 4 April 2020
When I read the appendix I thought I would not get into this world, but the author has created a totally different type of fantasy fiction that I haven't encountered before. Totally with the read, couldn't put the book down. The seat of the pants reading all through. LOVED IT.
Read more
Helpful
Report abuse

Ellinah C
5.0 out of 5 stars Daughter of Shades 1
Reviewed in Australia on 21 October 2019
Interesting story, characters and the supernatural l absolutely enjoyed it as it was different. I can’t wait to know where it’s all going thank you 😊❤️
Read more
Helpful
Report abuse

A. KEYZER
5.0 out of 5 stars Brilliant book!
Reviewed in Australia on 17 June 2020
This is a brilliant book. I absolutely loved it! Wonderful writing. Loved the world building. Best i have read for a long time!
Read more
Helpful
Report abuse

Kay Smillie
5.0 out of 5 stars Loved This! Can't Wait For More
Reviewed in the United Kingdom on 28 July 2019
Verified Purchase
This is the first piece of work I have read by this author, and it certainly will not be the last.

The first thing I have to draw your attention to is the cover. It is a stunner - in my humble opinion - and contains all the elements of the story, including venatrix Ayleth's shade, Laranta, as a spirit wolf. This cover would've had me purchasing the book without even reading the blurb, if I'd seen it in a shop.

The author's words are very powerful. Indeed, you could almost believe that she has a shade herself... Mercedes builds up the story, slowly - but it's never boring - firstly with child-like wonder, then adult intrigue, the atmosphere is frighteningly tense and emotionally claustrophobic, with a powder-keg relationship between Ayleth and Terryn. The characters are beautifully written and very expressive. I can't wait to find out more about Ayleth, Terryn, the Golden Prince, and Hollis in the next book.

I chose this book from a larger selection, then voluntarily read and honestly reviewed it. All opinions are my own.
Read more
2 people found this helpful
Report abuse

Abbie
5.0 out of 5 stars Brilliant first book!
Reviewed in the United Kingdom on 21 September 2019
Verified Purchase
This is the first novel I’ve read by Mercedes, and what a great first one to read! I thoroughly enjoyed this book and read it in one sitting. Sylvia does a great job at creating an interesting and original world that captivates the reader, as well as characters with real depth.

Ayleth is a likeable main character. She’s fierce, ambitious and intelligent, and I was glad to see these traits run throughout the entire novel. Her relationship with her shade, Laranta, is unique and it’ll be interesting to see how this develops. There are only a few recurring characters, but the well-built layers to each individual means that the lack of characters doesn’t detract from the plot.

I love her growing relationship with Terryn. I’m a sucker for the rival-to-lover trope, and Mercedes is building their relationship up at a good pace that fits perfectly into the plot without feeling forced. As the series continues, I think it’ll also be interesting to see what happens between Ayleth and Prince Gerard, although I’m undoubtedly rooting for Terryn.

Although originally I found the beginning to be rather slow, it makes sense as it allowed time to understand how the world works. There’s also quite a lot of original terminology and concepts which took a while to become familiar with, but they make the world Mercedes has created feel more real.

I enjoyed the book so much that I’ve already pre-ordered the sequel, which I’m really looking forward to reading. There are so many unanswered questions about Ayleth’s past that I was instantly left longing for more as soon as the book was over. At times, the writing was a bit too ‘tell’ instead of ‘show’, but descriptions of setting were well-written and imaginitive.
Read more
2 people found this helpful
Report abuse

Iggy
5.0 out of 5 stars Absolutely excellent book
Reviewed in the United Kingdom on 27 November 2019
Verified Purchase
Had me page turning from the very beginning. I loved everything about this book. The world is interesting, the characters are really likeable, the story compelling. Not a dull moment. I'm downloading book 2 immediately.
Read more
One person found this helpful
Report abuse

Amazon Customer
5.0 out of 5 stars Engaging tale of Magic & Spirits
Reviewed in the United Kingdom on 7 January 2020
Verified Purchase
I enjoyed reading Daughter of Shades because it is a fantastic introductory story into the main character Ayleth and the world in which she lives, that is filled with powerful magic and spirits told in an engaging manner that leaves you wanting more, I found myself devouring chapter after chapter and am now on book two in the series titled - Visions of Fate - Chapter 12.
Read more

5.0 out of 5 stars Engaging tale of Magic & Spirits
Reviewed in the United Kingdom on 7 January 2020
I enjoyed reading Daughter of Shades because it is a fantastic introductory story into the main character Ayleth and the world in which she lives, that is filled with powerful magic and spirits told in an engaging manner that leaves you wanting more, I found myself devouring chapter after chapter and am now on book two in the series titled - Visions of Fate - Chapter 12.
Images in this review

Kindle Customer
5.0 out of 5 stars Highly enjoyable
Reviewed in the United Kingdom on 18 September 2019
Verified Purchase
Made me feel spooky in places but well written and good pace to the story. Now on to book two to find out how the story progresses.
Read more
Report abuse
See all reviews
Back to top
Get to Know Us
Make Money with Us
Let Us Help You
And don't forget:
© 1996-2021, Amazon.com, Inc. or its affiliates