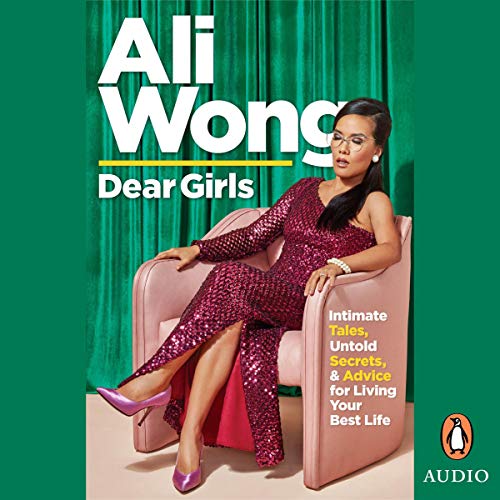 In her hit Netflix comedy special Baby Cobra, an eight-month pregnant Ali Wong resonated so strongly that she even became a popular Halloween costume. Wong told the world her remarkably unfiltered thoughts on marriage, sex, Asian culture, working women and why you never see new mum comics onstage but you sure see plenty of new dads.

The sharp insights and humour are even more personal in this completely original collection. She shares the wisdom she's learned from a life in comedy and reveals stories from her life offstage, including the brutal single life in New York (i.e., the inevitable confrontation with erectile dysfunction), reconnecting with her roots (and drinking snake blood) in Vietnam, tales of being a wild child growing up in San Francisco and parenting war stories. Though addressed to her daughters, Ali Wong's letters are absurdly funny, surprisingly moving and enlightening (and gross) for all.

Switch between reading the Kindle book & listening to the Audible narration with Whispersync for Voice.
Get the Audible audiobook for the reduced price of $32.95 after you buy the Kindle book.
Learn more about membership
By completing your purchase, you agree to Audible’s Conditions Of Use and Privacy Notice.
Sold and delivered by Audible, an Amazon company

4.6 out of 5 stars
4.6 out of 5
2,715 global ratings
How are ratings calculated?
To calculate the overall star rating and percentage breakdown by star, we don’t use a simple average. Instead, our system considers things like how recent a review is and if the reviewer bought the item on Amazon. It also analyses reviews to verify trustworthiness.

Amazon Customer
5.0 out of 5 stars Brilliant!
Reviewed in Australia on 21 April 2020
Verified Purchase
What a funny, insightful, interesting journey Ali Wong takes us in, in her book. Letters to her daughters about herself before them. I laughed and cried! What a refreshing outlook on life, women, motherhood, etc
Read more
Helpful
Report abuse

Kindle Customer
5.0 out of 5 stars Heartfelt book
Reviewed in Australia on 15 November 2021
Verified Purchase
Def get the audiobook version, as her tone and voice really set the scenes! Growing up as an Asian Boy I can definitely relate!
Read more
Helpful
Report abuse

Jacinta
5.0 out of 5 stars Loved it
Reviewed in Australia on 3 December 2019
Verified Purchase
Classic tell it as it is Ali Wong storytelling
Read more
Helpful
Report abuse
See all reviews

Mrs Zombie
5.0 out of 5 stars Ali Wong Rules!
Reviewed in the United Kingdom on 25 April 2022
Verified Purchase
Anyone that has left a negative review for Dear Girls has obviously no idea who Ali Wong is. The book is true to her style of comedy but also includes some heart felt sentiment. Maybe it's her honesty people can't deal with, but if you've seen any of Ali's stand up shows, you will love this book, trust me. Ali rules!
Read more
Report abuse

Anna
5.0 out of 5 stars Best book ever!
Reviewed in the United Kingdom on 28 April 2020
Verified Purchase
Ali Wong’s book is so funny and I couldn’t put it down. There were times i would burst out laughing and my partners would raise his eyebrows to understand what was making me laugh so hard. Reading about her life and her many adventures allowed me to connect with her and many of the things that speaks about I can deeply relate to. This was a great read especially during this very weird quarantine period.
Read more
3 people found this helpful
Report abuse

Amazon Customer
2.0 out of 5 stars not for me
Reviewed in the United Kingdom on 31 March 2020
Verified Purchase
I enjoyed the first few chapters but didn't like the message the book is trying to deliver. Ali, in her attempt to sound "real", came across vulgar, cheap and self centric. We are all imperfect but that doesn't mean it is ok to not try to be better.
Read more
One person found this helpful
Report abuse

Elizabeth
1.0 out of 5 stars Waste of Money
Reviewed in the United Kingdom on 24 January 2020
Verified Purchase
Unlike practically every other reviewer, I really didn't find this funny at all. The humour seemed dated to me and rather juvenile. I'm annoyed I paid full price for it, could've probably got 8 £0.99 books and all 8 of them would've been more enjoyable.
Read more
Report abuse

Intruder 911
5.0 out of 5 stars Funny Read
Reviewed in the United Kingdom on 10 January 2020
Verified Purchase
As entertaining as her comedy sketches. I definitely recommend it to everyone. I could not stop laughing on the train whilst reading it, very funny and informative.
Read more
One person found this helpful
Report abuse
See all reviews