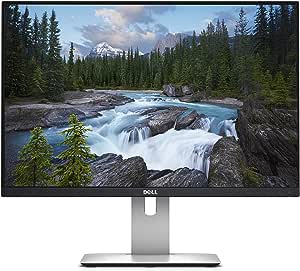 Visit the DELL Store
4.6 out of 5 stars 754 ratings
Available from these sellers.

Revel in the superior screen performance of the Dell UltraSharp 24 Monitor, loaded with premium features for an exceptional viewing experience.

4.6 out of 5 stars
4.6 out of 5
754 global ratings
How are ratings calculated?
To calculate the overall star rating and percentage breakdown by star, we don’t use a simple average. Instead, our system considers things like how recent a review is and if the reviewer bought the item on Amazon. It also analyses reviews to verify trustworthiness.

Michael J. Davies
3.0 out of 5 stars Decent enough, but does have its warts
Reviewed in the United Kingdom on 8 August 2018
Verified Purchase
If, like me, you are looking for a 16x10 format monitor then the choice is extremely limited, and you will no doubt end up considering this one from Dell. It is good that Dell still make an affordable 16x10 format screen, and as part of their Ultrasharp range one can be fairly confident that it will perform well.

I use it as an external screen to a Macbook Retina, which I run both Mac OS and Windows 10 on. Its works fine with both operating systems.

Lets take a look at what I would call the Pro's and Con's....

Pro's
- Out of the box its well colour calibrated on the Standard setting.
- Compared to most of the few other 16x10 format screens its a good price.
- Image quality overall is good (with some tweaking, see the Con's).
- Has a built in USB3 Hub.
- Built-in power supply, so no huge brick to have to find a place for.
- No dead pr stuck pixels on mine (at least none that I have noticed).
- Display to MiniDP cable provided.
- No issues walking from sleep (providing you select DP 1.2 from the on screen menu). It defaults to the old DP 1.1 and this does give sleep issues.

Con's
- The connections panel on the back is almost unusable, the only way to slot in USB cables etc is to lay the screen flat, even then its quite an exercise in manual dexterity. Laughingly it comes with a cover for the connections area, for the life of me I cant see why they would make such a thing.
- On the various images of the screen in the Dell and Amazon listings it shows the image extending to the thin bezel, Dell even tout that its edge to edge or something like that. The image DOES NOT extend to the bezel, there is a black frame border to the screen of approx 7mm. I cant say this would have concerned me much if I hadnt been expecting that it was edge to edge and spent most of a day trying to fix what was a non-existent problem.
- The back lighting isnt consistent across the screen. Its not bad just not that good.
- Out of the box was far too bright at a setting of Brightness 60. You could illuminate a darkened room with it.
- While the overall colour was good, the whites were too blue on mine. Adjusting the Colour Temp in the menu is a waste of time as it auto selects certain temps. 5700k is far too red and 6500 too blue, and nothing in between.
- The onscreen menu is aweful, touch sensitive buttons that sometimes work and sometimes dont, why cant we have real push buttons?!
- Maybe a small matter but the power button is bright white and very bright with no way to adjust it. I ended up with a piece of black insulating tape over it.
- The packaging is horrendous! Getting the screen out of the box is a logistical nightmare. As daft as it sounds I couldnt get it out of the box and had to look up a Youtube video on unboxing it, where I saw there is a well hidden tab in the box that needs to be pushed in. Even so, good luck.

Its a decent enough screen that mostly seems to lack an attention to detail. If you are after a 16x10 format screen you may have no choice other than to get this one. It serves a purpose. If you absolutely have to have a 16x10 screen then I suppose I would recommend this, just be prepared for some annoyances. If you dont absolutely need a 16x10 then look elsewhere for better choice and quality.

Alex C.
5.0 out of 5 stars Excellent monitor for it's price
Reviewed in the United Kingdom on 29 July 2019
Verified Purchase
pros:
1) 1920 x 1200 - the extra height compared to 1080 monitors is valuable, more vertical space for extra productivity, really worth it
2) many inputs - DP and Mini DP, 2 HDMI. Can output to another DP monitor (did not test it). Has also a hub (upstream USB 3.0 fat cable)
3) bright enough, although i prefer it to keep in lower brightness.
4) image quality is superb
minimal light bleeding (IPS screen)
5) Nice stand, allows full adjustment: vertical, horizontal, rotate to landscape, angle adjustment. Also the stand allows the monitor to sit quite closed with the wall, without taking too much space - compared to other stands, it's a space saver.
6) slim bezels
neutral:
1) capacitive buttons are "mneah", would have preferred real buttons. About 9/10 touches are ok, sometimes 1 missed...
cons:
1) no quick access to the back usb ports (newer models fixed that, by placing few usb ports on the sides - but also newer models have lost other features of this excellent model, or come at much higher prices)

John Tait
5.0 out of 5 stars Good Monitor.
Reviewed in the United Kingdom on 8 May 2017
Verified Purchase
Evenly illuminated screen with very good colour rendition and capable of high brightness. Very good image resolution and crispness. As usual though, there are plenty of adjustments available and it took me several hours, on and off, to arrive at a combination of settings that suited me for comfort on long sessions.

The articulations that are available, with the exception of the monitor height, are stiff and a bit difficult to use. Rotation on the base is particularly difficult: the base has to be held still and rotation performed by rotating the vertical pillar with the other hand, doing it by pulling/pushing either end of the monitor gives the impression that too much strain is being applied to the monitor.

One minor point, of interest to radio amateurs, the monitor produces a small amount of RFI in the 10 metre band and to eliminate this I had to use a ferrite toroid with the HDMI cable passing through three times, giving a lossy 90 micro-henries or so.

However, overall, I'm very pleased with it.

OllyC
5.0 out of 5 stars Great Monitor for The Money
Reviewed in the United Kingdom on 15 October 2018
Verified Purchase
Excellent picture quality, excellent thin bezel makes this model great for using in a mutli-monitor setup. Comes with a wide variety of connection options, HDMI, Display Port and Mini Display Port, comes with a Mini Display Port to Display Port cable, 1.5m long. Very handy having USB 1.1/2.0 and 3.0 Hub built into the monitor, a good number of each to connect all manner of portable devices to.
Read more

5.0 out of 5 stars Great Monitor for The Money
Reviewed in the United Kingdom on 15 October 2018
Excellent picture quality, excellent thin bezel makes this model great for using in a mutli-monitor setup. Comes with a wide variety of connection options, HDMI, Display Port and Mini Display Port, comes with a Mini Display Port to Display Port cable, 1.5m long. Very handy having USB 1.1/2.0 and 3.0 Hub built into the monitor, a good number of each to connect all manner of portable devices to.
Images in this review

Damyan Dobrev
5.0 out of 5 stars Amazing monitor, have the same at work
Reviewed in the United Kingdom on 28 December 2018
Verified Purchase
I am working as a software dev, and at work we got the same monitors. When I bought this one I did not know it's the same, I chose it because of the IPS screen, 16x10 resolution and the connectivity. Build quality is solid, screen is very adjustable, the USB ports are incredibly convenient, I switch from the windows PC to the mac laptop by switching exactly two cables, instead of: monitor, mouse, keyboard, phone charger, ipad charger, headphone jack. This is due to the amazing connectivity it provides. It also looks dope.
The only "not perfect" thing is that when displaying true black, the monitor displays some light leaks, but that is to be expected from an IPS screen and does not mean the quality of the monitor is bad. It also wouldn't bother anyone, but it is worth mentioning so that folks don't think their tech is broken.

Read more
4 people found this helpful
Report abuse
See all reviews
Back to top
Get to Know Us
Make Money with Us
Let Us Help You
And don't forget:
© 1996-2021, Amazon.com, Inc. or its affiliates