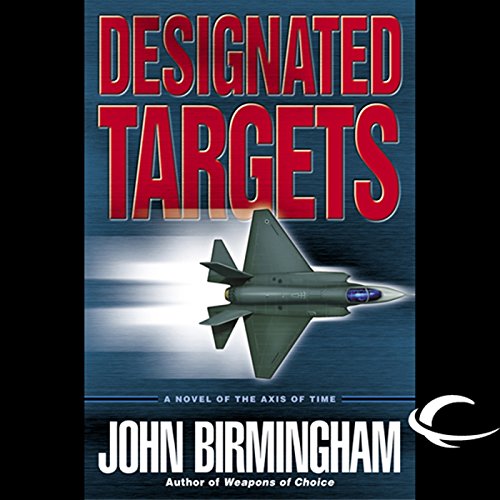 4.6 out of 5 stars
4.6 out of 5
145 global ratings
How are ratings calculated?
To calculate the overall star rating and percentage breakdown by star, we don’t use a simple average. Instead, our system considers things like how recent a review is and if the reviewer bought the item on Amazon. It also analyses reviews to verify trustworthiness.

Marshall Lord
4.0 out of 5 stars Second volume in an alternative history trilogy
Reviewed in the United Kingdom on 18 March 2007
Verified Purchase
This is the middle volume in an exciting series of three books in which a force from the 21st century is accidentally sent back in time to 1942 and throws the history World War two onto a completely different course.

I found the first two episodes in this trilogy so fascinating that when I learned that the final instalment had been published in Australia several months before the US and UK releases I could not wait, but had to order that one from Oz. None of the books in the series disappointed me.

The full "Axis of Time" trilogy is

In the first book, "Weapons of Choice" a multinational carrier battle fleet from the 21st century is accidentally sent back in time to 1942 when a scientific experiment goes wrong. They arrive in the middle of the US fleet which would have been about to win the battle of Midway, which immediately causes a major "friendly fire" incident; meanwhile the Japanese fleet which should have been sunk gets wind that something very odd is happening and escapes.

A different story in which a military unit was sent back to World War II might have given them a dilemma; should they intervene on the allied side, or try to minimise their impact in the hope of getting back through the wormhole to their own time without changing the past? Birmingham never gave his characters that option, as their arrival itself changed events beyond any hope of putting the timeline back in place. In this book his 21st century characters are struggling to make the best of the world they now find themselves in.

What happened at Midway was bad enough, although the the arrival on the Western side of a 21st century carrier battle group was more than enough compensation. But a second problem is that, while the great majority of the multinational force is thrown back as a unit and arrive together, one or two ships turn up in other parts of the world and are captured by bad guys so that some modern technology, and knowledge of the future which would have happened, fell into the hands of the Soviet Union, Imperial Japanese, and Nazis. Once they have overcome their disbelief, Stalin, Hitler, and Imperial Japanese alike resolve not to repeat the mistakes which in our timeline consigned them to the dustbin of history.

The men and women from the 21st Century face a continuing struggle both to adapt to the very different world they find themselves in, and to persuade the "temps" (short for contemporary) from their own side to accept such things as an African-American U.S. Marine colonel, and a Royal Navy Commander who is a half-asian woman. I would like to think that my parents and grandparents' generations would have treated members of the 21st century forces better than they are treated in this book: however, no doubt Mr Birmingham is right that some people would have treated them well and others very badly.

The treatment in this book of J Edgar Hoover, who is very prejudiced against the 21st century people and makes a real nuisance of himself, is quite entertaining.

Mr Birmingham takes the view that Japanese members of the multinational force, and other people in an anomalous position such as a 21st century Russian special forces officer, would regard the current rulers of their home countries as tyrants and put loyalty to their 21st century comrades before loyalty to country. However, the "temps" have great difficulty trusting Japanese and this is perhaps the worst of the many problems with the multinational force have in getting on with their new allies.

The action scenes in the book are very well done and make it almost impossible to put down; there is also some excellent use of humour. One of the members of the multinational force from the 21st Century is Prince Harry, who has become a Colonel in the S.A.S; throughout the trilogy there are some amusing lines and situations involving him.

None of the books in this trilogy are suitable for those of a squeamish disposition. Faced with Axis and Soviet powers who have become even more cruel and ruthless in their desperation to avoid defeat, the allies have to be almost equally brutal to defeat them. I can't remember reading a story in which the "good" guys kill so many millions of innocent people since E.E. "Doc" Smith's Lensman series. (More so even than in the real WW2, which is saying something.) Birmingham rarely goes for the easy answer and this is a series in which horrible things often happen to good people - and in which good people do horrible things.

Nevertheless, if you are into alternative history or war stories, and provided you are not squeamish, you will very probably enjoy the "Axis of Time" trilogy.
Read more
8 people found this helpful
Report abuse

Sean
5.0 out of 5 stars Brilliant!
Reviewed in the United Kingdom on 13 November 2006
Verified Purchase
This is a brilliant book, I loved it.

Time travel to the past is such a tired idea, but this is like a "breath of fresh air" it takes the concept and makes it seem real. Most books would just look at the weapons and that angle but Birmingham covers the social angle to great effect too. For example the ships that go back to 1942 have crews of men AND women of all ranks and from all races. That doesnt seem strange until you remember that in World War Two things were very different, no women or people from minorities in position of authority especially in the US Marine corps so the survivors from the future have to end up fighting enemies in the USA as well as Germans and Japanese.

History changes rapidly as the info falls in to the hands of Stalin, Hitler and the Japanese none of whom like what the future holds for them and make every effort to change the version we know. It has hooked me and I wonder how Birmingham is going to wrap things up?

MRS A WILKINSON
4.0 out of 5 stars Four Stars
Reviewed in the United Kingdom on 2 January 2015
Verified Purchase
Goods received promptly and as advertised = no problems
Read more
Report abuse

Paul Guernsey
5.0 out of 5 stars It just gets better!
Reviewed in the United Kingdom on 10 April 2006
Verified Purchase
I picked up Weapons of Choice when on holiday in Australia last year and was horrified to find John Birmingham wasn't published in the UK. Thank God for Amazon! I got Designated Targets as soon as I could and I wasn't disappointed.
The idea reminded me of a film I saw a while back called "Final Countdown"?? where a US aircraft carrier gets sucked back to Pearl Harbour. I have also read the "What If" alternate history books (you should read these too if you are into history). The idea is great and it is carried through so well in these books you just can't put them down. If you love Sci Fi and war films this really is a series for you. In fact someone should get the rights for this and make a new Medal of Honour / Call of Duty type game, it would be great.
Read more
4 people found this helpful
Report abuse
See all reviews
Back to top
Get to Know Us
Make Money with Us
Let Us Help You
And don't forget:
© 1996-2021, Amazon.com, Inc. or its affiliates