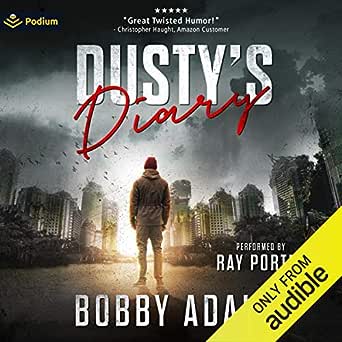 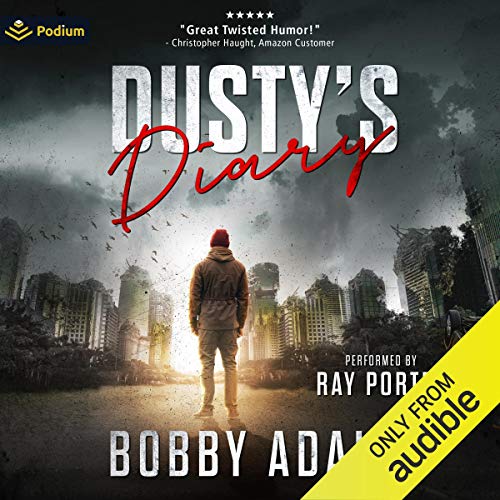 4.1 out of 5 stars
4.1 out of 5
261 global ratings
How are ratings calculated?
To calculate the overall star rating and percentage breakdown by star, we don’t use a simple average. Instead, our system considers things like how recent a review is and if the reviewer bought the item on Amazon. It also analyses reviews to verify trustworthiness.

KHB
5.0 out of 5 stars Unexpectedly Enjoyable!
Reviewed in Australia on 23 August 2019
Verified Purchase
Wasn't sure what to expect and even though the explanations of acronyms, sayings, etc. went on a bit, I thoroughly enjoyed this foray into Dusty's apocalyptic world. Funny guy with a boat load of realism. Looking forward to reading the other books in this series!
Read more
One person found this helpful
Helpful
Report abuse

Amazon Customer
4.0 out of 5 stars Cool.
Reviewed in Australia on 25 November 2020
Verified Purchase
At times you skim thru, but very entertaining. Keeps you occupied and i will no doubt read./ but the next one.
Read more
Helpful
Report abuse

Jann Daly
1.0 out of 5 stars To slow
Reviewed in Australia on 4 December 2019
Verified Purchase
Very slow going, found myself skipping ahead many pages, then it didnt really finish, the next book i wont be getting
Read more
Helpful
Report abuse

Alain Larose
3.0 out of 5 stars How it all ends
Reviewed in Australia on 2 September 2018
Verified Purchase
I like the plain talk.
Read more
Helpful
Report abuse
See all reviews

Kindle Customer
4.0 out of 5 stars Funny, and interesting as one man tries to survive
Reviewed in the United Kingdom on 9 January 2020
Verified Purchase
As a three-book set at a low price, I thought what do I have to lose? Glad I got!

Edit: Some other reviewers say they are only getting one book in this deal - they are just totally wrong! It is three short books merged without cover shots or titles into one book, no gaps. Check the page count for the individual books - 78 pages, 93 pages and 91 pages, and then for the box set - 257 pages.

Dusty has been hiding in a survival bunker to avoid the infected and decides to surface after two years. He's well equipped, but has an attitude problem with those who caused the disease that is destroying the world. At times his rants are clearly not for the politically correct crowd. But there are some moments when he clearly hits the truth about the world. About how depending on where you get your news and opinions from leads you to believe in one bunch of politicians and hate another group and their supporters. Except the other group have the same problem with their own biased news sources.

How he survives without being an amazing clever guy is pretty convincing, how he uses what he does know it get an edge on the dangerous shroom-heads - the infected mad people - is also a bit convincing.

Then he realises there is another survivor, the mysterious M, whom he eventually meets up with. And gets a bit of a surprise as well. ;)

They team up and M persuades him to come and meet Auntie Millie, based on a picture of Auntie posing in the nude for playboy! Their trip is a bit of an adventure, and M has clearly calmed down Dusty's ranting a lot. Their road trip ends with another surprise too, leaving Dusty a bit confused, then he has an idea - which becomes book four ( which I have just bought and started reading. And for the doubters who think they are missing book two and three from the box set, book four continues on from the last sentence of the box set.)

The individual books are short and I found I was reading them fast to get to the next stage. Once you start ignoring Dusty's non-PC language, it's a fun fast read.

As a prequel to the Last Survivors, it covers the very start of the problems that lead to that series 300 years later, but it is Dusty's story really. One man versus the world. He's an ordinary man, not some super-soldier or scientist. Its fun. Enjoyable.
Now I am going to start on book 4.

I wonder if there will be a short series set, say, 30 - 60 years later, making the situation in The Last Survivors easier to understand.
Read more
2 people found this helpful
Report abuse

Kindle Customer
5.0 out of 5 stars Not just another post apocalypse set
Reviewed in the United Kingdom on 14 July 2019
Verified Purchase
Not just another post apocalypse set, it's a bit more irreverent, more thoughtfull and not the usual gore and violence fest. Thoroughly enjoyed books 1-3 for 99p, and just spent the same again on number 4. And picked up the box set that spawned this series again at a ridiculous bargain 99p. Don't know how Bobby is making money at these prices, he certainly deserves to be, so I guess he's funding himself adequately and isn't a greedy money chaser. That's how it comes across in these books, the style is nicely down to earth, without the dumb decisions or surprise grand skills and lack of "realness" that turns me off lesser writers. Well worth a 99p punt, even for others like me who tend to check authors out with free starters. Very glad I did, hope the other books are as pleasant a read.
Read more
4 people found this helpful
Report abuse

kevin
5.0 out of 5 stars Read This. Highly Recommended.
Reviewed in the United Kingdom on 1 March 2020
Verified Purchase
I loved this book but its too short. It does not make it any longer by pretending that it is 3 books. I have downloaded part 4 but this is also very short.
I read, and enjoyed, The Last Survivors series and I am hooked on this authors engaging style. I have already purchased Slow Burn.
I hope Dusty has a future. It is, I guess, up to Mr Adair to give poor Dusty some more life, in which he might get to realise that dream, envisioned by an image on a playing card but dashed by the reality of meeting the lady.
God, we have all been there, right? Oh maybe its just me and Dusty!!!
Read more
One person found this helpful
Report abuse

AlwaysReading
5.0 out of 5 stars Excellent
Reviewed in the United Kingdom on 12 September 2019
Verified Purchase
This is a humorous, honest and disturbing story about a survivor of a cataclysmic infection of the world.

Dusty - the writer of the diary - has an honest and realistic point of view regarding the whys and wherefores of how the world collapsed. It's set in Texas, it's filled with monsters - who, apart from him is left 'normal'? Will loneliness be his downfall?

I really enjoyed this entertaining, funny tale and yet it did have deeper, ugly truths. I loved Dusty's 'voice'.

"angua31"
5.0 out of 5 stars Another Corker !
Reviewed in the United Kingdom on 24 January 2021
Verified Purchase
This book like the 'Slow Burn' series is (and here I struggle for words that don't sound clichéd) an easy and comfortable ride. It's not tame - somehow you can get inside the characters and the topography becomes yours, the anxieties and tribulations of Dusty's become your own. I seldom find myself screaming DON'T run down the effing alley, as I do with so many horror films etc, Dusty thinks thru his options, and more often than not comes up with an MO I can completely understand and support. I am currently starting book 2 and I know book 3 is going to be completely crap for the simple reason that I will by then feèl Dusty is a cross between myself and the real guy in a similar situation. Keep writing Mr ..... I will keep reading x
Read more
One person found this helpful
Report abuse
See all reviews
Back to top
Get to Know Us
Make Money with Us
Let Us Help You
And don't forget:
© 1996-2021, Amazon.com, Inc. or its affiliates