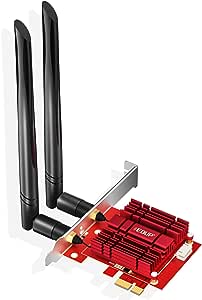 Brand: EDUP
4.5 out of 5 stars 1,252 ratings
Secure transaction
Returns Policy
Amazon-managed Delivery
Your transaction is secure
We work hard to protect your security and privacy. Our payment security system encrypts your information during transmission. We don’t share your credit card details with third-party sellers, and we don’t sell your information to others. Learn more
Amazon-managed Delivery
Amazon manages delivery by using preferred couriers/agents. Order delivery tracking to your doorstep is available

4.5 out of 5 stars
4.5 out of 5
1,252 global ratings
How are ratings calculated?
To calculate the overall star rating and percentage breakdown by star, we don’t use a simple average. Instead, our system considers things like how recent a review is and if the reviewer bought the item on Amazon. It also analyses reviews to verify trustworthiness.

Aidan mckeown
1.0 out of 5 stars Continual dropouts, tested on multiple wireless access points.
Reviewed in Australia on 16 August 2020
Verified Purchase
As the title says, it would drop internet connection extremely frequently. I have tested multiple access points, and have tried multiple different driver installations, including the ones included in the package, from the manual, from EDUP, and straight from intel.
Bluetooth worked well, but I ordered a WiFi card for a reason.
Not worth the cheaper price point.
Read more
Helpful
Report abuse

Hoang Pham
1.0 out of 5 stars Doesn't work
Reviewed in Australia on 11 September 2020
Verified Purchase
Installed correctly, usb header, pci slot. Bluetooth works but WIFI does not. Driver installs but the device has an error.

1.0 out of 5 stars Doesn't work
By Hoang Pham on 11 September 2020
Installed correctly, usb header, pci slot. Bluetooth works but WIFI does not. Driver installs but the device has an error.

Koolaskoalas
1.0 out of 5 stars I couldnt get bluetooth to work, wifi was fine but needed it for bluetooth
Reviewed in Australia on 26 January 2021
Verified Purchase
Bluetooth didn't work unfortunately
Read more
Helpful
Report abuse

Anthonyk
1.0 out of 5 stars Do not buy
Reviewed in Australia on 17 October 2020
Verified Purchase
Product is faulty. Does not sit properly on the motherboard
Read more
Helpful
Report abuse

Russell
5.0 out of 5 stars Good wifi
Reviewed in Australia on 31 December 2020
Verified Purchase
Nice and fast and has a good range
Read more
Helpful
Report abuse
See all reviews

S. Howes
5.0 out of 5 stars Works well, but check you have the space for it!
Reviewed in the United Kingdom on 21 May 2020
Verified Purchase
You get the card, two antenna, a narrow & full size PCIE bracket for different case sizes, a small screwdriver, two screws (you only need one, if any), drivers on a 252MB USB stick, internal USB cable to connect the bluetooth and an instruction manual, which tells you how to obtain updated drivers.

The card works well, but I did have a minor issue on fitting, that should have been obvious, but I did not open up the PC case before ordering, so it did not meet with a consideration before fitting. The red heatsink does take a fair bit of room, which should not be the case with most PC's, but it was with mine. The only available PCIE slot was the lowest one, next to the motherboard headers for the PC case. This conflict was resolved by screwing in the card at a tiny bit off square, so that the conflict was avoided - there are going to be a few cases that might present greater difficulty, so checking might be worthwhile.

Driver install & update was easy and everything worked. On the day on installing the card, I conducted an internet speedtest on my wired PC, to give an idea at the maximum possible internet speed I could obtain, which was 67.9Mbits/sec. After installing the card, I did a speedtest on the PC which had this card installed. The disadvantage for that PC was that it was a floor up from the router & the antenna were against the wall; the advantage was that I have a WiFi 6 (AX) router. The speed I obtained from this card was 67.6Mbits/sec, which I was very happy with, considering the distance from the router & the floor & walls in-between.

I had not heard of this brand previously & the price was competitive, so I was a little bit cautious about what the performance would be, but I am certainly happy so far. I obviously cannot comment on the cards long-term performance in terms of stability & resilience, so I will update this review if I develop any concerns.

In summary, great performance, but check you have room first for the red heatsink.
Read more
23 people found this helpful
Report abuse

Andrew
1.0 out of 5 stars Bad product or faulty product...not recommended
Reviewed in the United Kingdom on 27 November 2020
Verified Purchase
Needed Wifi 6 PCIe card. There are many. Reviews said this was ok. So purchased it.

Package came quickly, no issue there.

Installation into the PCIe slot, nothing special if you know what you are doing.

However, once you turn on the PC, it was a different matter.
1. My PC would not start, had to go into BIOS and reset it.
2. After booting into the BIOS, 1 HDD was not recognized.
3. Windows would not boot. Reset button pressed a few times. Had to go into Safe mode and adjust settings...

4. After booting into windows. Tried to installed driver with the USB stick provided. That froze the PC.
5. Resetting and safe mode again...
6. Had to unplug all HDD and UBS devices from motherboard.
7. Booted into Windows, tried to install wifi driver. Worked this time, but no install shield protection. Did not know where driver or what kind of driver was installed. Virus scanned already, so installed anyway.
8. Installed bluetooth driver, (had install shield protection).

9. Ran some speed tests...original internal file transfer speed using old wifi adaptor was approx 12MBs. New PCIe wifi card speed was 150Kbs, yes (Kbs, not a typo).
10. Check wifi properties on PC, it was AX, but the speed was not.
11. Had enough!!! Returned it.

Jamie L
5.0 out of 5 stars Works great very pleased
Reviewed in the United Kingdom on 7 May 2020
Verified Purchase
Well this is yet another great product from EDUP and Highly recommend!

This network card is a great bit of kit and has been working solid since I installed it into my gaming pc. I'm surprised with just how well it performs and having built in Bluetooth is just a bonus. I'm currently running this connected to a 2.4Ghz network until my new Router arrives and i honestly can't fault it, works flawless in both 2.4Ghz and 5.8Ghz.
Read more

5.0 out of 5 stars Works great very pleased
Reviewed in the United Kingdom on 7 May 2020
Well this is yet another great product from EDUP and Highly recommend!

This network card is a great bit of kit and has been working solid since I installed it into my gaming pc. I'm surprised with just how well it performs and having built in Bluetooth is just a bonus. I'm currently running this connected to a 2.4Ghz network until my new Router arrives and i honestly can't fault it, works flawless in both 2.4Ghz and 5.8Ghz.

Last L.
1.0 out of 5 stars The 2.4ghz band is fixed on channel 1
Reviewed in the United Kingdom on 16 February 2021
Verified Purchase
This card is fine for what it is, but the supplied drivers are awful, and the 2.4ghz band only operates on channel 1. So if you are trying to use this card to connect to anything other than a router (where you can set the channel), such as any IoT (Internet of Things), or casting device such as Microsoft Wireless Adapter / Roku / Miracast or basically anything that doesn't have an option to switch channels , then this card is pointless and won't work. As for seller Customers Service, they clearly new about the defect as they immediately told me to switch to channel 1 on my router, but then failed to understand what I was telling them about why this didn't solve my problems. So it seems they know of a defect in the card and continue to sell it without making clear it's limitations, and they are difficult to communicate with. Luckily Amazon will accept a no quibble return, so I'm now looking for a new card.
Read more
Report abuse

smdanjm
3.0 out of 5 stars need to check for clearance before buying!
Reviewed in the United Kingdom on 23 July 2020
Verified Purchase
the heat sink is too large so it doesn't fit in my microATX motherboard. before buying, check if you have enough clearance between your PCIE lane and GPU!
Read more
2 people found this helpful
Report abuse
See all reviews
Pages with related products. See and discover other items: Best Rated in Network Cards
Back to top
Get to Know Us
Make Money with Us
Let Us Help You
And don't forget:
© 1996-2021, Amazon.com, Inc. or its affiliates