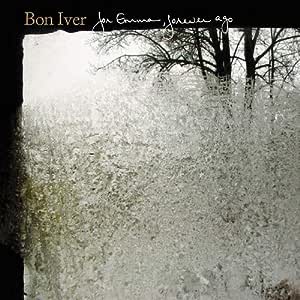 For Emma Forever Ago

Pronounced "bohn eevair; French for "good winter" and spelled wrong deliberately. This debut is centered around a particular aesthetic; Justin Vernon, the primary force behind Bon Iver, moved to a remote cabin in the woods of Northwestern Wisconsin at the onset of winter, alone for three months. This solitary time fed a bold, uninhibited new musical focus. All his personal trouble, lack of perspective, heartache, longing, love, loss, and guilt that had been stockpiled over the past six years was suddenly purged into song. The NY Times called this record "irresistible", and it was given a "Recommeded" rating by Pitchfork. RIYL: Iron & Wine, M. Ward, and Elliott Smith.

4.7 out of 5 stars
4.7 out of 5
1,573 global ratings
How are ratings calculated?
To calculate the overall star rating and percentage breakdown by star, we don’t use a simple average. Instead, our system considers things like how recent a review is and if the reviewer bought the item on Amazon. It also analyses reviews to verify trustworthiness.

Nick
2.0 out of 5 stars Coffee Shop Blues
Reviewed in the United Kingdom on 30 April 2019
Verified Purchase
I along with a couple of other reviewers, am of the opinion that perhaps there is something awry with my music taste with regards to this album. Around the time it came out the accolades were like some sort of muso journo ticker tape parade. There had to be something in this.

I bought this originally in 2009, and was deeply unimpressed. It’s dour, grey, miserable. The musical equivalent of the North Pole.

Following in from a short segment in the tv documentary Soundbreaking, in which Bon Iver, featured I thought I blow the dust off.

Well it hasn’t improved. I think that either by accident or design, this album was made to go with that skinny chai latte and ramen noodles that all the hipsters love.

William Steele
5.0 out of 5 stars Unmissable, unforgettable - one for the ages
Reviewed in the United Kingdom on 6 September 2015
Verified Purchase
Like no doubt thousands of young guys and girls during the late 00's, I got my heart broken to the soundtrack of Bon Iver. I was an undergraduate at university, and as Nick Hornby in High Fidelity observed, it was hard to tell what came first - was I miserable because I loved Bon Iver, or did I love Bon Iver because I was miserable? Did my enjoyment of the album instil in me a subconscious desire to experience the same things Justin Vernon sang about, draped in eerie harmonies, clicks and scrapes, to run the same gamut of emotions, or was it simply catharsis with the pain that he sings so vividly and almost tangibly about that drew me in closer to the warm tones? Regardless, the album For Emma, Forever Ago brings back powerful, if unrefined, emotions. The peculiar flavour of heartbreak, with its delicate, absolute and all-consuming awfulness and despair is a memory that I think we can all remember or at least empathise with. And it's at its most beautiful in songs like Skinny Love, re:stacks and Blindsided, (and Beach Baby from the LP, Blood Bank) songs of anger, mourning, shock, pain, loss, sadness, and ultimately, by the end of the album, acceptance and redemption. It's an intense experience that draws the listener in and confronts them with raw emotion, exposing their own feelings.

On a more personal level, this was the first album for me that addressed love and loss in such an oblique manner ('there's a black crow sitting across from me; his wiry legs are crossed / And he's dangling my keys, he even fakes a toss' is only one example of many) so as, counter intuitively, to make it seem more genuine, free from what I perceived to be the clichés of songs about heartbreak. Undoubtably the rich use of metaphor, the true impart of the songs wrapped up tightly in the words and sounds rather than overtly on display was a big part of why I liked it so much. It's a deeper album that rewards careful listening on a quiet Saturday night, and although student me devoured it, it's not a self-indulgent piece of navel-gazing only fit for those inexperienced in love - to assume that would be to miss out on something truly special. It's a beautifully crafted paean to the experience of loss, a timeless part of the universal experience of the human condition.
Read more
13 people found this helpful
Report abuse

David Ralph Williams
2.0 out of 5 stars One man show
Reviewed in the United Kingdom on 30 November 2018
Verified Purchase
To be honest, this CD sounded like it was made by someone on their own in their bedroom strumming a guitar and recording themselves. Not a big fan of that kind of thing. Should have listened to a sample before buying, but the good reviews made me think otherwise. It's great if you like this type of thing, but I need more input from more musicians and creative people where making albums is concerned. The only album I have ever heard that was done all by a single person that passes the 'solo' test is Phil Collins - Both sides.
Read more
2 people found this helpful
Report abuse

Red on Black
5.0 out of 5 stars Bon Iver - the best album of 2008
Reviewed in the United Kingdom on 9 November 2008
Verified Purchase
For Emma just creeps up on you and invades your existence but in the most wondrous way. The only album which has impacted on me in a similar fashion is Jeff Buckley's "Grace". Its much more than a simple singer songwriter effort, it points in new directions. I had an awful long drive home one evening in the pitch darkness and listened to it properly. It's like having your best in friend in the car with you. When it finished I just put it back on again and enjoy. Very wintry, frosty, isolated, atmospheric and lovely. Creature Fear and Lump Sum are brilliant. While Blindsided and Wolves would grace any great acoustic album. Indeed its distant cousin is probably Will Oldham (Bonnie "Prince" Billy's) "Master and Everyone" which is well worth checking out as one of the greatest Americana albums of recent years. Finally on "For Emma" there is "Re. Stacks" - the song of the year. Love the verse that goes -

"There's a black crow sitting across from me; his wiry legs are crossed
And he's dangling my keys he even fakes a toss
Whatever could it be
That has brought me to this loss?"

Quite where Justin Vernon goes next I don't know; but I do care a lot.
Read more
2 people found this helpful
Report abuse

Massimo Parravicini
4.0 out of 5 stars Hold on a second...
Reviewed in the United Kingdom on 4 September 2019
Verified Purchase
Flume, Skinny Love, Blinsided and For Emma are great songs, but the album is somehow musically poor and gaunt. I really cannot understand all the hype and enthusiams. just like for the Fleet Foxes
Read more
Report abuse
See all reviews
Back to top
Get to Know Us
Make Money with Us
Let Us Help You
And don't forget:
© 1996-2021, Amazon.com, Inc. or its affiliates