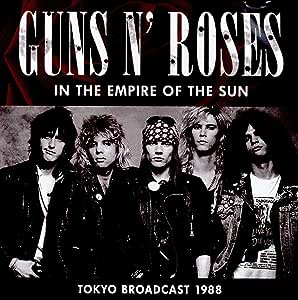 In The Empire Of The Sun

Guns N Roses Appetite for Destruction Tour, performed across four continents to promote the band s debut album released in July 1987, was undertaken over a 16-month period during which the group served as opening act for The Cult, Mötley Crüe, Alice Cooper, Iron Maiden and Aerosmith, as well as headline shows of their own. It was the only tour by Guns N Roses for which the classic lineup of Axl Rose, Slash, Izzy Stradlin, Duff McKagan and Steven Adler performed together, aside from opening four shows in LA at the Los Angeles Memorial Coliseum for The Rolling Stones in October 1989 The tour kicked off in the UK, the month before the release of Appetite, with Guns performing three nights at London s notorious Marquee Club. They returned to the US shortly after, and began their North American leg of the tour in Halifax, Nova Scotia, followed by another four nights in Canada. The tour, with its highs and lows, included a horrific incident back in England in August 88 at The Monsters of Rock Festival, when two fans were trampled to death during Guns N Roses set. During the final month of the tour, in December 1988, the band travelled to Japan for the final Pacific Leg of the tour, and on 4th December performed at the Nakano Sun Plaza Hall in Tokyo. This CD contains the entire show recorded that night for broadcast, in front of an oriental crowd, to whom, at one juncture, Axl directs a query as to the crowd s somewhat restrained reaction, not appearing to fully appreciate the cultural difference between audiences in the East and the West. The show however is a dynamic and powerful performance that, for a band who had played almost every night for the best part of a year and a half, is quite a staggering achievement and remains testament to the early promise of Guns N Roses. It is just a shame, albeit an understandable one, that Guns N Roses would never recapture the magic that was witnessed on this legendary tour.

4.1 out of 5 stars
4.1 out of 5
28 global ratings
How are ratings calculated?
To calculate the overall star rating and percentage breakdown by star, we don’t use a simple average. Instead, our system considers things like how recent a review is and if the reviewer bought the item on Amazon. It also analyses reviews to verify trustworthiness.

Stephen Taylor
5.0 out of 5 stars Great live recording
Reviewed in Australia on 15 August 2018
Verified Purchase
One of the best quality live recordings of GNR I have heard.
Read more
Helpful
Comment Report abuse
See all reviews

New Wave of Classic Rock
4.0 out of 5 stars One for the fans
Reviewed in the United Kingdom on 26 December 2015
Verified Purchase
Not as good as Live at Ritz cd and if I wasn't a fan would give 3 stars but if like me you love Guns n Roses then you will love this
Read more
3 people found this helpful
Report abuse

TG
5.0 out of 5 stars Good set, good sound, good addition to your collection.
Reviewed in Canada on 5 May 2016
Verified Purchase
This is definitely one of the better live recordings. The set is good, the crowd's cheering isn't overpowering or interfere with things (contrary to their dismay!) and the sound quality is acceptable. It's over all bright and heavy in the mids, but better than some other live recordings available. A definite must have for the collection.
Read more
2 people found this helpful
Report abuse

Drum n bass DEE
5.0 out of 5 stars GnR in their original an best line up, Izzy n popcorn steve
Reviewed in the United Kingdom on 23 December 2015
Verified Purchase
If you were a fan in the kate 80s and thought Lies ended to soon then this is ur cd, bit more raw than the ritz set musically, and in parts a bit stop to start agen, however nice to hear lies and live f@#k like a suicide tracks mixed with appetite. A great set , my only moan is, why did they ever play knokin on heavens door? Their cover of jumpin jack flash was better.
Read more
3 people found this helpful
Report abuse
See all reviews
Get FREE delivery with Amazon Prime
Prime members enjoy FREE Delivery and exclusive access to movies, TV shows, music, Kindle e-books, Twitch Prime, and more.
> Get Started
Back to top
Get to Know Us
Make Money with Us
Let Us Help You
And don't forget:
© 1996-2020, Amazon.com, Inc. or its affiliates