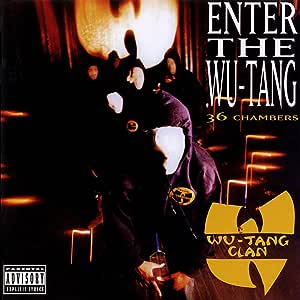 Vinyl LP pressing.This debut emerged as one of the most influential rap albums of the '90s.It laid the groundwork for the rebirth of New York hip-hop, an underground, hardcore new sound that went on to influence Biggie, Jay-Z, Nas, and Mobb Deep, among others.Rap became at once theatrical and cerebral, MCs lyricists and powerhouses capable of violence, metaphor, humour and revolution in their performing.The album is full of hard, gritty beats, references to pop culture and martial arts, eclectic piano and string sounds, as well as surrealist overtones, and there truly was nothing like it in the hip-hop world at the time.Even now, it's an original album in a league of its own.Get it.You won't regret it.* Genre: Rap, Hip-Hop
* Wu-Tang Clan - Enter the Wu-Tang (36 Chambers [Vinyl]

4.7 out of 5 stars
4.7 out of 5
2,470 global ratings
How are ratings calculated?
To calculate the overall star rating and percentage breakdown by star, we don’t use a simple average. Instead, our system considers things like how recent a review is and if the reviewer bought the item on Amazon. It also analyses reviews to verify trustworthiness.

I have not receive
5.0 out of 5 stars WU TANG STILL LIVE
Reviewed in Australia on 6 October 2020
Verified Purchase
YOUR LYRICS WILL ALL WAY BE PART OF OUR GROWING UP
Read more
Helpful
Report abuse

Justanothercustomer
5.0 out of 5 stars Cash Rules Everything Around Me.
Reviewed in the United Kingdom on 18 May 2017
Verified Purchase
An absolute classic hip hop album. I first heard C.R.E.A.M. track while watching YO! MTV RAPS on Saturday morning back in the early nineties and it totally summed things up at that moment of my life.
All the ninja stuff was damn cool at that time too so this album was like gold dust, a must have in everyone's collection.
That songs chorus still resonates today.
Great album, highly recommended.

Gizzark Henry
5.0 out of 5 stars The great hope of the East Coast.
Reviewed in the United Kingdom on 16 February 2010
Verified Purchase
By 1993, West Coast G-funk and gangsta rap was dominating the hip-hop airwaves.

Dr. Dre, having paved the way with his group NWA and his solo classic The Chronic, owned the hip-hop world along with Suge Knight and his Death Row records. Tupac Shakur was already making waves. The East Coast as yet had little to no notable rappers to its name; but here, on this low-budget posse record, the seeds of the East/West rivalry were sown as they wrenched the focus away from Compton.

To this day, no rap album sounds like Enter The Wu-Tang, and no rap group sounds like they do. Nine of them, all MCs, headed by the RZA, each with their own styles, colliding into an astonishing, snarling beast of a record.

With a tiny budget to work with, RZA crafts sawn-off, raw beats that punish the listener. None of the rough edges are smoothed off, leaving pounding jams that lack the richness that G-funk boasted. What replaced it was bizarre kung-fu film references.

The album, unified by its sparse sound, allows the nine Wu-Tang MCs room to stretch, and each of them has their own style, from Ghostface Killah's high-pitched yelp to Method Man's stoned ramble, all the way through to the utter insanity of ODB.

Ghostface opens the record on the clattering 'Bring Tha Ruckus,' a clear statement of intent; his rhymes about a 'head rush' and being 'tougher than an elephant tusk' already establishing how bizarre and unique the group's rhymes were. 'Shame On The N****' pushes ODB to the front as his marble-mouthed style seems both threatening and endearing. Meanwhile, 'C.R.E.A.M.' was so influential that its title became a rap slang word in and of itself.

From here, virtually every member of the crew - particularly The GZA, Raekwon and ODB - would craft era-defining solo albums of their own, but it all started here and arguably, this was the most unified album the group produced both conceptually and as far as quality.

David
5.0 out of 5 stars From the very moment you hear Ghostface' voice..
Reviewed in the United Kingdom on 2 March 2015
Verified Purchase
You know this album is going to be crazy from track one, the moment you hear "GHOSTFACE! Catch the blast of a hype verse" Track after track it's brilliant, Clan in Da Front has probably the greatest intro to a track ever. With each member complimenting each other's style so well, Method Man with his comical wordplay, Ghostface's abilities to tell stories, GZA dropping knowledge, it all just fits. It's brilliant. The production almost sounds unfinished, but that turns out to be a great thing, because it just fits so perfectly.

You have to listen, words on a screen can't do the album justice! Hip Hop classic!
Read more
2 people found this helpful
Report abuse

John Williams
4.0 out of 5 stars Very pleased, these guys have plenty of energy
Reviewed in the United Kingdom on 6 February 2016
Verified Purchase
Got to know of these guys from a new acquaintance at a jam night session in a local pub. My curiosity was stirred, so decided to purchase this album, as I already have some rap artists in my collection. Very pleased, these guys have plenty of energy, and true to form the songs make a point, gets your attention.
Read more
4 people found this helpful
Report abuse

Phaeton
5.0 out of 5 stars Stands the test of time
Reviewed in the United Kingdom on 20 June 2015
Verified Purchase
My fondness for Hip Hop dried up after Jay-Z's early stuff, and I haven't listened to much in the past decade or so. But going back to the 36 chambers didn't disappoint at all. The energy of it is exactly as I remember and it's really stood the test of time. It's just a shame the genre doesn't produce artists like this anymore.
Read more
3 people found this helpful
Report abuse
See all reviews
Get FREE delivery with Amazon Prime
Prime members enjoy FREE Delivery and exclusive access to movies, TV shows, music, Kindle e-books, Twitch Prime, and more.
> Get Started
Back to top
Get to Know Us
Make Money with Us
Let Us Help You
And don't forget:
© 1996-2020, Amazon.com, Inc. or its affiliates