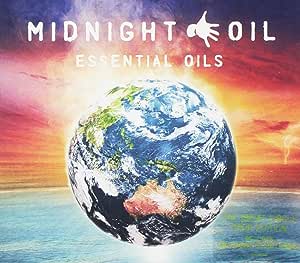 Secure transaction
Your transaction is secure
We work hard to protect your security and privacy. Our payment security system encrypts your information during transmission. We don’t share your credit card details with third-party sellers, and we don’t sell your information to others. Learn more
Details
Ships from
Amazon AU
Sold by
Amazon AU
New (6) from
$18.78 FREE Delivery on first order.

ESSENTIAL OILS is the definitive collection handpicked by the band and distilled from their amazing 25 year recording legacy, this two disc set is a chronological history a road trip through the very best of the band's 14 studio albums and two groundbreaking EP's. The package features remastered audio, liner notes by Rolling Stone Magazine Senior Editor, David Fricke and rare images from the Oil's archive. From early tracks such as Cold Cold Change, Back On The Borderline and Armistice Day, to breakthrough Australian hits Power And The Passion and Read About It, to the songs that put them on the world stage Beds Are Burning, The Dead Heart, Blue Sky Mine and Truganini the length and breadth of Midnight Oil's recorded catalogue is staggering.

4.6 out of 5 stars
4.6 out of 5
162 global ratings
How are ratings calculated?
To calculate the overall star rating and percentage breakdown by star, we don’t use a simple average. Instead, our system considers things like how recent a review is and if the reviewer bought the item on Amazon. It also analyses reviews to verify trustworthiness.

greg neate
5.0 out of 5 stars excellent
Reviewed in Australia on 24 May 2019
Verified Purchase
a must have the your collection
Read more
Helpful
Report abuse
See all reviews

Scott Carrick
5.0 out of 5 stars Consistently Great Melodic Rock Superb
Reviewed in the United Kingdom on 20 February 2019
Verified Purchase
Not just one of the best bands to come out of Australia but possibly one of the greatest rock bands ever.
Midnight Oil are best known for the 1987 hit Beds Are Burning, but they definitely not one hit wonders.
Each of their albums contained at least two or three great rock anthems full of hooks, great choruses and fantastic meaningful lyrics.
Environmentalists, anti-colonialists and anti-war peace protesters before these terms became trendy and right on, Pete Garrett and the rest of the band were always ahead of the curve, from their anti-American hegemony of Hercules and US Forces to the pro-environmental Beds Are Burning and aboriginal rights anthem Truganini.
They also could belt out great anthems for any era rousing the jaded human spirit such as Forgotten Years, my own personal favorite.
A fantastic, two CD collection containing remastered versions of all their singles, Essential Oils is required listening.
Five Stars - it's worth it!
Fantastic.
Read more
2 people found this helpful
Report abuse

Morten Vindberg
5.0 out of 5 stars Great Band from Australia
Reviewed in the United Kingdom on 21 March 2013
Verified Purchase
This compilation to a certain extent confirms the impression I had that the four albums that Midnight Oil released during 1987-1996 are their strongest, in terms of melodic songwriting.

Something happened with the sound of the band with the "Diesel and Dust" album from 1987. Producer Warne Livesey was brought in to produce, and this probably explains some of the change towards a more melodic approach, with more acoustic guitars. The album contained the great "Beds are Burning", which probably is the best known song with the band. Five songs form this great album have been picked out for this compilation which serves the compilers to honor. All my favourites from the are found here.

The next album "Blue Sky Mining" from 1990 was also produced by Warne Livesey and this is probably their strongest and most consistent. It's represented by four strongs here; but in my opinion "Bedlam Bridge" should have been included too.

"Earth and Sun and Moon" from 1993 was almost as strong, with great songs such as "In the Valley" and the title, which has been left here. The three songs from the album are all worthy representatives of a great album, which was produced by Rick Launay two of the early albums. Soundwise, though, the album comes close to the two predecessors.

"Breathe" from 1996 produced by Malcolm Burn is a quite different Midnight Oil album, which does not really sound very like any of the albums before or those that came after. It's a great album which really grows on you when you get to know it. Only one song has been chosen for this compilation, which is really a shame. "Surf's Up Tonight" is a great song, but songs like "Home" and E-Beat" are just as strong and at least one of more track should have selected.

I only know about the final three albums through the last five tracks on this release, and based on them, it appears that the group's last album, "Capricornia" cannot be ignored.

Among the early tracks I have only few favourites, among those Kosciusko" from "Red Sails in the Sunset" stands out.

Midnight Oil was a great band, and I won't hesitate to call at least four of their albums "classics"
Read more
One person found this helpful
Report abuse

Mr Anthony Brown
5.0 out of 5 stars It does what it says on the tin. This is essential
Reviewed in the United Kingdom on 29 August 2013
Verified Purchase
This is a two disc retrospective of Midnight Oils career in chronological order and is an excellent introduction to new fans and a timely reminder for those existing fans of how good Midnight Oil could be. It has everything that you need: US Forces, Best of Both Worlds, Hercules, the Dead Heart, Beds are Burning, Trugannini, Blue Sky Mine and many other classic tracks. Go and buy it now and hear what a great but underrated band Midnight Oil were.
Read more
One person found this helpful
Report abuse

Davey B
5.0 out of 5 stars Aussie must have
Reviewed in the United Kingdom on 28 February 2020
Verified Purchase
great set of songs from a truly underrated band oil it up and pump out some political vibes of our times.
Read more
Report abuse

David Chambers
5.0 out of 5 stars Awesome
Reviewed in the United Kingdom on 8 February 2014
Verified Purchase
I have all the other Midnight Oil CDs, so I thought this "greatest hits" collection would be superfluous and didn't buy it when it was first released. However, I brought it up on Spotify yesterday and the remasters, particularly of the older stuff, are stellar - so I ordered it as CDs. This compilation is well worth adding to your Oils collection, or makes a good introduction to the band. 6 stars!
Read more
2 people found this helpful
Report abuse
See all reviews
Back to top
Get to Know Us
Make Money with Us
Let Us Help You
And don't forget:
© 1996-2021, Amazon.com, Inc. or its affiliates