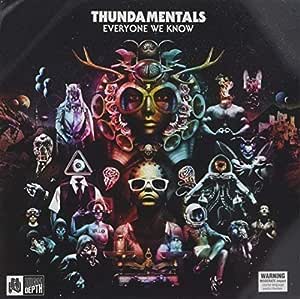 Secure transaction
Your transaction is secure
We work hard to protect your security and privacy. Our payment security system encrypts your information during transmission. We don’t share your credit card details with third-party sellers, and we don’t sell your information to others. Learn more
Details
Ships from
Amazon AU
Sold by
Amazon AU
New (3) from
$4.12 FREE Delivery on first order.

EVERYONE WE KNOW - THUNDAMENTALS

Thundamentals announce their hotly awaited forthcoming album Everyone 'We Know,' out via their newly minted label, High Depth The album details arrive after months of lead up since street track "Late Nights" premiered on Blue Mountains radio station in July. What followed were album tracks "Never Say Never," "Ignorance Is Bliss" as part of their Got Love Initiative and "Think About It" feat. Peta The Wolves, plus live shows where Morgs, Poncho and Tuka debuted new songs in front of thousands of fans. Recorded at the studio of good friends Hermitude in Sydney's inner suburbs, the 15 track release hits new heights not only for the band, but for hiphop in general. From the lush choraljazz collision of the title track to the sublimely stuttering schitz of "Wyle Out Year" it's hard to argue with any suggestions biased or otherwise that Morgs and Poncho have stepped things up. 'Everyone We Know' boasts a musicality that is rooted in hiphop, but at the same time transcends that label, offering something for anyone who simply loves music, no genre attached.

There are 0 customer reviews and 1 customer rating.
Back to top
Get to Know Us
Make Money with Us
Let Us Help You
And don't forget:
© 1996-2021, Amazon.com, Inc. or its affiliates