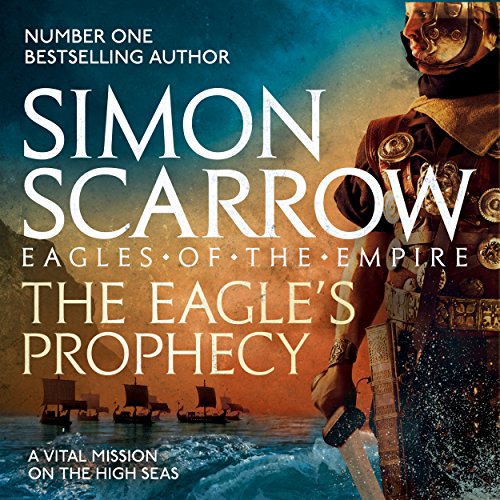 The Eagle's Prophecy: Eagles of the Empire, Book 6

The Eagle's Prophecy is the powerful sixth novel in Simon Scarrow's best-selling Eagles of the Empire series. Perfect for fans of Bernard Cornwell.

The Adriatic Sea, AD 45. Cato and Macro, centurions of the Roman army, are horrified to learn that they face possible execution after the death of their commanding officer. Fortunately, the Emperor's secretary is willing to offer them an alternative: to join the marines and hunt down a band of brutal pirates who are decimating not only Rome's reputation, but also a critical supply chain.

As they discover the true horror of battle at sea, Macro and Cato must also remember their real mission: to recover from those pirates a set of scrolls that hold secrets vital to the future of the Roman Empire. Rome will do anything to get them back....

Switch between reading the Kindle book & listening to the Audible narration with Whispersync for Voice.
Get the Audible audiobook for the reduced price of $23.41 after you buy the Kindle book.
Final days - Don't miss out!
Learn more about membership
By completing your purchase, you agree to Audible’s Conditions Of Use and Privacy Notice.
Sold and delivered by Audible, an Amazon company

4.7 out of 5 stars
4.7 out of 5
954 global ratings
How are ratings calculated?
To calculate the overall star rating and percentage breakdown by star, we don’t use a simple average. Instead, our system considers things like how recent a review is and if the reviewer bought the item on Amazon. It also analyses reviews to verify trustworthiness.

There are 0 reviews and 26 ratings from Australia

Clemens A. Schoonderwoert
5.0 out of 5 stars A Marvellous Eagle's Prophecy!
Reviewed in the United Kingdom on 6 January 2022
Verified Purchase
Read this book in 2005, and its the 6th volume of the amazing "Eagle" series.

This tale is set in the year AD 45, after being dismissed from the 2nd Legion in Britannia, and being investigated for involvement in the death of a fellow officer, Cato and Macro find themselves in Rome.

To elope prosecution, devious Narcissus makes them an offer they can't refuse, and that offer is rescuing an Imperial agent who's been captured by pirates, operating from the Illyrian coast.

With them on this secret mission will be their old enemy, Vitellius, and they need to retrieve important documents that can damage the Emperor and the safety of Rome.

The pirates are being forewarned and they deal the Romans a heavy blow, and especially when Cato and Macro find out that treachery and the presence of Vitellius are playing a formidable part, they will need to find the pirate base rather sooner than later.

What is to follow is a great and suspenseful Roman adventure, in which Cato and Macro must do their utmost to save the Empire and their Emperor from disaster, and deal with this problem ruthlessly and determinedly in order to bring the Empire back under control.

Highly recommended, for this is another brilliant addition to this fantastic series, and that's why I like to call this episode: "A Marvellous Eagle's Prophecy"!
Read more
One person found this helpful
Report abuse

C. Hart
1.0 out of 5 stars At length, a very good series.
Reviewed in the United Kingdom on 7 September 2021
Verified Purchase
I have got this far through the series and am enjoying the story, although the new characters are now becoming recycled versions of previous one’s. My only other thing is the bizarre, repeated use of the phrase “at length”, which must be some sort of public school affectation. It is now really beginning to bug me.
Read more
Report abuse

BlackBrigand
5.0 out of 5 stars Terrific Story of the Roman Legions
Reviewed in the United Kingdom on 25 February 2016
Verified Purchase
This is the sixth volume of this Roman saga featuring Macro and Cato two Roman legionnaires who contrive to be present at most of the diverse campaigns of the period. Most of the stories are based around historical events and people, .Most of the historical detail and facts are accurate as befitting the work of a history teacher and enthusiast of the Roman era and the writing style is comfortable and easy to read. Simon Scarrow has done for Roman history what Bernard Cornwell did for the Peninsular Campaign.
Overall, the books are very readable, and importantly very entertaining. These earlier volume are by and large better thoughtout and less 'commercial' than some of the later ones. I have the complete collection on my bookshelf and am now part way through re-reading the series from the beginning and am finding it a joy.
Read more
2 people found this helpful
Report abuse

Simon Binning
4.0 out of 5 stars Another page turner in a fun series
Reviewed in the United Kingdom on 14 November 2012
Verified Purchase
Review of the series (followed by a review of this book):
This series of books is based around the adventures of two men - Macro and Cato. Macro is a soldier through and through; he has spent his life in the army and is a centurion when we first meet him in the first book. In that book we also meet Cato who joins the legion as a new recruit, although he seems an unlikely candidate for a soldier. The series goes on to relate their many adventures and the relationship between them. Most of the stories are based - sometimes loosely - on real events and people, with a healthy dose of artistic license.
As far as I can tell the historical detail and facts are accurate, and the writing is generally engaging. There are criticisms in other reviews about the authors use of 'modern' slang; I know what they mean, but would we identify with 'roman' slang? For me, it is not a problem, I am not a fan of trying to invent historical language, it is too easy to fall into the 'ye olde shoppe' trap!
Overall, the series is very readable, and rolls along at a good pace. Like some other historical series, it doesn't do to try and fit the events into a timeline, as it soon becomes clear that the two men could not have done everything they do in one lifetime, but that doesn't detract from a fun series. Two niggles:the formatting annoys me in that the gaps between paragraphs are too long, particularly where there are long conversations, and they are a little over-priced.
Review of this book:
Macro and Cato find themselves in Rome, under suspicion, and bored. They suddenly find themselves sent on a mission by someone they cannot trust, alongside someone who has already proved treacherous. So it's more of the adventures we have some to expect from the author. The story moves along well, and has many twists and turns. Overall a good fun read.
Read more
2 people found this helpful
Report abuse

Spring 45 AD and Centurions Macro and Cato, dismissed from their Legion in Britain, are trapped in Rome accused of a crime. Politically devious Narcissus offers them a dangerous way out but they must re-capture an imperial agent and his vital scrolls accompanied by an old enemy Vitellius. Amid more plots that could destroy the Emperor, Macro and Cato struggle to clear their name and stay alive.

I have read all the "Eagle" series in order, followed the careers of Cato and Macro with great interest and eagerly await the already pre-ordered "Praetorian".
Not the heights of Literature (nor pretending to be), but well-written nevertheless, the series is filled with his great depth of knowledge, enthusiasm for and interest in the Romans.
Cunningly peopled with all the names from our history lessons - Vespasian, Cladius, Caratacus, Boudica - and the Roman campaigns to extend the Empire but centred on two Roman soldiers who become unlikely close friends, Macro and Cato, their careers and friendship carries the stories along. Following them closely allows the intimate details of human life to be in the forefront while the everyday lives of Roman soldiers and the political intrigues of the Roman Empire provide the backdrop.

PS I found it helpful to have a one-page list of Roman army ranks, which I used as a bookmark, and I had the odd glance at ancient maps (not mine I hasten to add!).
Read more
One person found this helpful
Report abuse
See all reviews