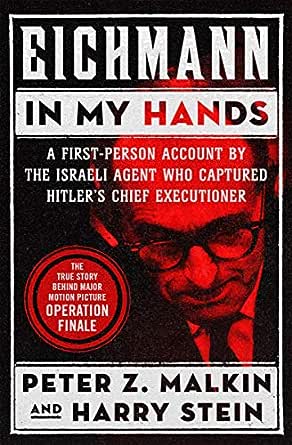 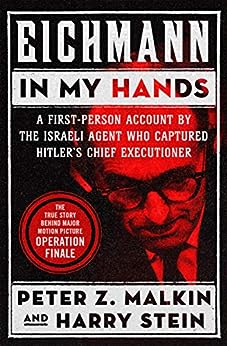 Eichmann in My Hands: A First-Person Account by the Israeli Agent Who Captured Hitler's Chief Executioner Kindle Edition

4.7 out of 5 stars
4.7 out of 5
140 global ratings
How are ratings calculated?
To calculate the overall star rating and percentage breakdown by star, we don’t use a simple average. Instead, our system considers things like how recent a review is and if the reviewer bought the item on Amazon. It also analyses reviews to verify trustworthiness.

BridgeLady
4.0 out of 5 stars An angry book!
Reviewed in the United Kingdom on 10 November 2019
Verified Purchase
The planning and capture of Eichmann was an incredible feat thanks to a team of dedicated Members of Mossad.
The telling of that story by Peter Malkin was also, I felt, an opportunity to slate the British for their role in occupying Israel from 1917 until 1948. The first part of the book describes the author’s earlier years when he had been a member of the terrorist organisation - Ulgan, that had been responsible for the deaths of 91 Brits and 46 injured following a bomb explosion at the St David’s Hotel in Jerusalem in 1946. Malkin speaks about his activities after the war and how he attended a training camp in the hills outside Haifa to learn about the use of explosives, “...terrific fun, a game full of excitement and risk”. ...”we were raiding British installations.”
Following an attack on a police station, (not by Malkin), he was caught and beaten by the Brits. “They needed to see Jewish blood”. Malkin never forgave them for the beating.

Peter Malkin’s verbal attack on the British initially over-shadows the subject of the book but between 1945 and the 1970s, UK labour governments successively expressed anti Semitic views just as the Labour Party currently does in 2019. But Malkin was also bitterly opposed to the British presence in Israel before and during the war, despite the fact that their surrounding enemies, Iraq, Syria, Jordan and Egypt were frothing at the bit to get in there.

To add to Malkin’s hatred of the British govt, he believed that during the war the British leadership refused to bomb railway lines leading to Auschwitz. This theory has been debated and is generally believed to be incorrect. Once there was proof that Jews were being murdered in Austwich, The allies didn’t bomb the lines for many important reasons, both strategic and humanitarian and not because, as Malkin says, “they wanted to cut down the possible number of postwar Jewish refugees to Palestine”.

As far as the actual story about the capture of Eichmann is concerned, Malkin’s motivation was fuelled by the tragic loss of his sister and her children during the war. He also had the kind of personality that sought adventure and danger which was advantageous in the search and subsequent capture of this mass murderer.

Malkin has an arrogance about him. When asked how many men he’d need for the mission he replied “just one. Me and myself. Maybe three others as backup.”

In fact the team was made up of at least 10 members including his boss, Uzi.

Malkin demonstrates in his book that he liked to do things his own way rather than follow orders. For example, when he gave Eichmann some of the wine being saved for Sabbath. The other members of the team were angry with him and also for being too pally with their captive. This was because Malkin wanted to gain Eichmann’s trust and get him to sign a document agreeing to be taken to Israel and tried there in a court of law. Malkin also wanted to try to find out if Eichmann had any conscience about the atrocities he committed despite the fact that it wasn’t part of the Mossad’s remit to get to know the man on a personal level.

All in all this book was a fascinating insight into the capture of a mass murderer. It was written by a very angry man.

Wilz
4.0 out of 5 stars Enthralling!
Reviewed in the United Kingdom on 7 December 2018
Verified Purchase
If you're old, like me, Eichmann is a name that has the word "monster" stuck to it. So many of these twisted and evil people disappeared and it was amazing when he was caught and put on trial. I can remember the reaction from most of my family well. "Serves the ******* right".
Therefore to read about the Mossad Agent who actually caught him, to hear about his background and his reaction to Eichmann, is very interesting. The book clearly sets out what Eichmanns involvement was but doesn't dwell on it or get too gruesome.
All told, an interesting and different take on the capture of one of the worst of the Nazi hierarchy.
Read more
Report abuse

Bellringer
4.0 out of 5 stars Riveting Stuff
Reviewed in the United Kingdom on 28 May 2020
Verified Purchase
This story is made all the better because it is true. People who do terrible things should never be allowed to feel they got away with them. The capacity of the wrong doer to explain their actions or excuse them is
also incredible
Read more
Report abuse

Hmc
5.0 out of 5 stars A well crafted story of an incredible achievement
Reviewed in the United Kingdom on 18 December 2018
Verified Purchase
Excellent, well written and page turning. I bought this after watching the film which I felt showed Peter being sympathetic to Eichmann Great to get the real understanding
Read more
Report abuse

Michele's Reviews
5.0 out of 5 stars Historic and Important Read
Reviewed in the United Kingdom on 13 December 2018
Verified Purchase
I was fascinated by this book and how Eichmann was finally caught. It's a great read and even though you may know the outcome before reading the book, it's so interesting to know how it all came together.
Read more
Report abuse
See all reviews
Get FREE delivery with Amazon Prime
Prime members enjoy FREE Delivery and exclusive access to movies, TV shows, music, Kindle e-books, Twitch Prime, and more.
> Get Started
Back to top
Get to Know Us
Make Money with Us
Let Us Help You
And don't forget:
© 1996-2020, Amazon.com, Inc. or its affiliates