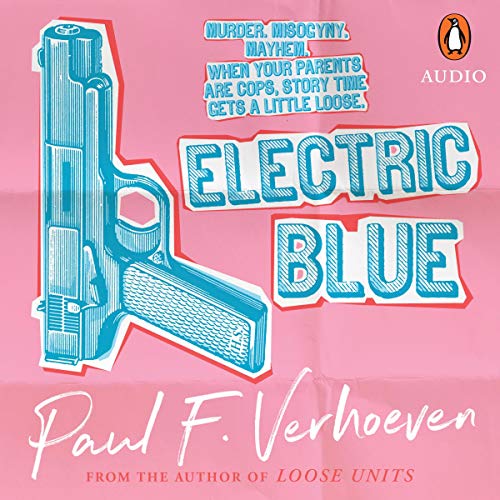 Paul Verhoeven's ex-cop dad, John, spent years embroiled in some of the seediest, scariest intrigue and escapades imaginable. One day John offered Paul the chance of a lifetime: he'd spill his guts on tape. What unfolded in Loose Units was a goldmine of true-crime stories, showcasing John's dramatic experience of policing in Sydney in the 1980s and brilliantly twisted sense of humour. But what happened next in John's career was twice as weird.

Electric Blue spans the final years of John's stint in the New South Wales police force, when he took up an offer to move into the grimy, analytical world of forensics. Paul unpicks his father's most terrible cases. There was the case of a rapist hiding in the walls of shower block, a body that was quite literally cooked, and the bizarre copycat suicides.

But what's it actually like to have a heroic ex-cop as a dad? Paul and John delve into their unique father-son relationship and how they ended up so different to each other. They figure out how to deal with the choices they've made...or wish they'd made. And Paul's mum, Christine, reveals what it was like to be a pioneering female cop in the '80s when misogyny was rife in the force.

Thrilling, fascinating and unexpectedly laugh-out-loud funny, Electric Blue is another high-octane adventure in policing, integrity and learning what family is really all about.

4.3 out of 5 stars
4.3 out of 5
46 global ratings
How are ratings calculated?
To calculate the overall star rating and percentage breakdown by star, we don’t use a simple average. Instead, our system considers things like how recent a review is and if the reviewer bought the item on Amazon. It also analyses reviews to verify trustworthiness.

Kindle Customer
5.0 out of 5 stars 10/10
Reviewed in Australia on 4 March 2021
Verified Purchase
Loved it! After reading Loose Units I was worried I wouldnt enjoy this as much, but it was just as great!
Read more
One person found this helpful
Helpful
Report abuse

Allison Edwards
5.0 out of 5 stars Pleasantly different.
Reviewed in Australia on 21 September 2020
Verified Purchase
Loved the way this book was written.
Felt like I was there, sitting listening as each story was told. Highly recommend both this book and Loose Units for the same reason.
Read more
Helpful
Report abuse

Adele Cookson
5.0 out of 5 stars Highly recommended! A rollicking tale
Reviewed in Australia on 13 September 2020
Verified Purchase
Loved it! Fantastically written and a great snapshot of time. As much a lovely story about a father son relationship as crime detail.
Read more
Helpful
Report abuse

Shelleyrae
4.0 out of 5 stars Fascinating if unconventional
Reviewed in Australia on 5 December 2020
Electric Blue by Paul Verhoeven defies simple description. This isn’t a straightforward biography, or true crime book, it’s a conversation between a son and his father, (and occasionally a son and his mother who was also once a police officer), about work and family, trauma and ADHD, and the past and present. Ifound Electric Blue to be a fascinating and entertaining, if unconventional, read.
Read more
Helpful
Report abuse
See all reviews