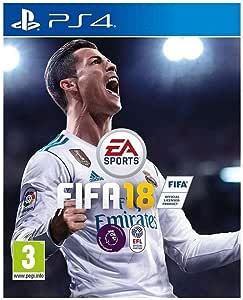 This update will be available to download from 29th May 2018

Celebrate The World's Game in EA SPORTS FIFA 18 with the addition of footballs biggest tournament: the 2018 FIFA World Cup Russia. Available to FIFA 18 owners on the PlayStation 4, Xbox One and PC through a free* content update on May 29, the FIFA World Cup update lets you experience the greatest tournament on earth through authentic gameplay, teams, stadiums, and more.

Powered by Frostbite, EA SPORTS FIFA 18 blurs the line between the virtual and real worlds, bringing to life the players, teams, and atmospheres that immerse you in the emotion of The Worlds Game. The biggest step in gameplay innovation in franchise history, FIFA 18 introduces Real Player Motion Technology, an all-new animation system which unlocks a new level of responsiveness, and player personality now Cristiano Ronaldo and other top players feel and move exactly like they do on the real pitch. Player Control combined with new Team Styles and Positioning give you the tools to deliver Dramatic Moments that ignite Immersive Atmospheres around the world. The Worlds Game also takes you on a global journey as Alex Hunter Returns along with a star-studded cast of characters, including Cristiano Ronaldo and other European football stars. And in FIFA Ultimate Team, FUT ICONS, featuring Ronaldo Nazrio and other football legends, are coming to FIFA 18.

4.5 out of 5 stars
4.5 out of 5
1,836 global ratings
How are ratings calculated?
To calculate the overall star rating and percentage breakdown by star, we don’t use a simple average. Instead, our system considers things like how recent a review is and if the reviewer bought the item on Amazon. It also analyses reviews to verify trustworthiness.

Creepy Pasta Kitty
2.0 out of 5 stars so you like things different huh?
Reviewed in the United Kingdom on 12 November 2018
Verified Purchase
As the headline says, you like things different huh? Well guess what, you've got it! It's a common complaint, oh this fifa game is the same as last years. But I bet those people don't say oh my house is still standing,that's the same as yesterday, how boring. Seriously, change can be a bad thing. And this a football game, there's only so much that can be changed without changing things just for the sake of it, and it's a mainstream game based on the most popular sport, so making it too complicated would be stupid.

And with all that in mind here is fifa 18! It feels like it has just changed things for the sake of it and has made things more complicated just so it can claim it's not the same game as last year, so I hope your happy, because I'm certainly not. First off I'm visually impared, and with that in mind loved fifa 17's high contrast black theme, and they got rid of it. Why? Well because nothing can stay the same, nothing! And the writing in this game is thus much, much harder for me to read, but even not coming from a VI perspective the grey theme in 18 simply looks nowhere near as good as fifa 17's.

And now we come on to the killer. The thing for me that killed fifa 18 so much I gave my copy away to a charity shop. People have been complaining forever that the career mode is just the same as last year. And the career mode in 18 has had a massive overhall...and it's utterly dreadful. Before you disagree like mad, again this is a game from a series that releases a game every year based on the world's most popular sport, it's not bought just by die hard football fans, casuals like me buy it too. With that in mind lets discuss transfers. Now you by players buy adding them to your shortlist then approaching to buy, enquiring about them etc. A completely pointless middle man step which add literally nothing other than wasting your time. Oh and good luck finding a player to buy. I kid you not playing as Grimsby town I added a full page of players to my shortlist,in transfer season...couldn't find one, not one that was available to bid for. All of them, every single one had apparently been bought too recently by their club. Again how is this good exactly? In previous fifas you can't bid for any player, I don't know the exact conditions tbf, but not every player accepts bids, so why they had to make it this hard is beyond me.

But wait! Once you've finally found a player to bid for(I did playing as Leeds...but Leeds isn't as desperate for good players as Grimsby so...) you then have to enter into negotiations via cutscenes or get a lacky to do it and skip the cutscenes. But you can't enter a single amount to offer, because of course you can't you have to select a don't go higher than and starting figure. And then more cutscenes yay! You then have to negotiate with the player including special clauses etc...You do know this is a football game right? As in a game where you play football? This isn't a football manager game, but with all this admin crap it feels like one. Do you really think, say a person who works a 5 day 9-5 job and only plays games casually will have the patience to go through all of that? Really!? Because I certainly don't, and if you pick a crap team like Grimsby and need a good lot of players fast, and to sell lots, yeah, no...I gave up...Seriously. I don't know what the gameplay is like as I'm not even joking I was playing this game for nearly an hour without playing a single game. Not one game, in a football game. Because remember on top of all those negotiations, you have training to sort out, emails, the youth academy. I honestly think EA is trolling us, saying like ok you want change, take this then! As this game is definitely different from last years fifa, but this just goes to show why you shouldn't always listen to the customer, the customer most certainly isn't always right.

Sure if you just want a game there's the usual kick off, tournaments etc. But in previous fifas the career mode felt like a good balance of matches and admin stuff. And you can't turn it off, there's no simple mode or anything like that. And this all to mask that beyond career mode(and ultimate team I think, I don't play that) it's the same game as last year.

So in summary, well done! You've got your wish! This game isn't the same as last years! But unfortunately it isn't a football game anymore, it's a football manager game with some mode like kick off, tournaments etc for anyone who actually wanted a football game not a football manager game. So yeah, just stick to fifa 16(fifa 17 isn't bad, but fifa 16 is perfect). It still has training, you can loan players for two years like in this game, you can auto replace players if they're injured etc before a match just for one game, you still have women's leagues. You have everything in fifa 16, the only thing this has is an updated career and ultimate team mode. But career mode is awful and buying a game just for ultimate team surely isn't worth it, meaning in my opinion this game has absolutely nothing, nothing to offer that fifa 16 hasn't that's actually any good.

Clare
5.0 out of 5 stars FIFA - Every woman's dream game. Unless you have small kids!
Reviewed in the United Kingdom on 31 December 2018
Verified Purchase
Haven't seen my husband since I gave it on Christmas Day. I'm getting to watch so much tv. I haven't even been called to sort the Transer of players or buying of them, so that's good! Every now and then, I have to shut the door as all I can hear is 'oh for f#### sake ref'!
Read more
4 people found this helpful
Report abuse

Dave
3.0 out of 5 stars Career mode needs overhaul.
Reviewed in the United Kingdom on 11 May 2018
Verified Purchase
This game needs a big overhaul on career mode it needs a lot more new leagues too keep it more interesting and longer lasting. The leagues I think it needs is the 5th league in England as this would add more depth too the F A Cup with non league teams causing cup upsets against football league teams. Also you would have teams relegated and promoted from the league 2 and National league. I also think that Scotland should have more leagues added. I wish they also added more leagues from Holland, Portugal and Italy. Let’s have some new leagues added with the likes of Greece, Romania,Ukraine and Czech leagues. The rest of the world needs a lot more teams adding as well. The game also needs a lot more stadiums added. Also more managers and coaches added too teams with manager sackings if teams don’t suceed.Many more things could be done for career mode fans but Ea just seem to concentrate on making more money from ultimate team packs. But I am sure that if career mode was taken out of fifa a lot of people would not buy fifa ever again. So come on fifa look after the career mode fans of this game.
Read more
Report abuse

Raihaan Mohammed
3.0 out of 5 stars Waste of money really.
Reviewed in the United Kingdom on 14 November 2017
Verified Purchase
Have bough fifa 2 years in a row and cannot see much of a change. Don't get me wrong there are many her core fans but I think they should have took a different approach. Really am excitednbecause I will be able to verse my friends with new stats on teams which will then change the game. Overall I don't think it is worth upgraded unless you are interested in the new updates they bring to store.
Read more
One person found this helpful
Report abuse

Harry H
1.0 out of 5 stars The worst one yet
Reviewed in the United Kingdom on 27 February 2018
Verified Purchase
The worst FIFA game ever. It's gradually just getting worse and worse each year. I definitely won't be getting the next one, I can guarantee that. EA have to be the worst gaming company at the moment, all they care about is money and not the actual game or the fans. The gameplay in this game is horrific. The sad thing is, the alternatives to FIFA are not great.
Read more
One person found this helpful
Report abuse
See all reviews
Get FREE delivery with Amazon Prime
Prime members enjoy FREE Delivery and exclusive access to movies, TV shows, music, Kindle e-books, Twitch Prime, and more.
> Get Started
Back to top
Get to Know Us
Make Money with Us
Let Us Help You
And don't forget:
© 1996-2020, Amazon.com, Inc. or its affiliates