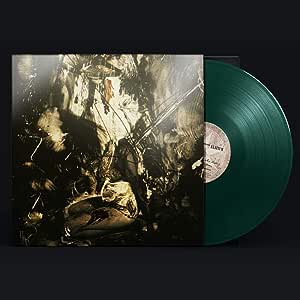 Share
Only 2 left in stock (more on the way).
Quantity:1
Add to Cart
Buy Now

Secure transaction
Your transaction is secure
We work hard to protect your security and privacy. Our payment security system encrypts your information during transmission. We don’t share your credit card details with third-party sellers, and we don’t sell your information to others. Learn more
Details
Ships from
Amazon AU
Sold by
Amazon AU
Elizium - 30th Anniversar... has been added to your Cart
New (7) from
$39.93 + FREE Delivery

Formed in 1984, Fields of the Nephilim is the creation of vocalist and front man Carl McCoy. Highly influential, especially in the world of goth, but also within the metal and electronic genres, their legacy endures to this day. You can hear their influence on bands like Swans, Godspeed! You Black Emperor, Explosions In The Sky, Wolves in The Throne Room, Behemoth and more. Carl McCoy has even been called the “Uncle" of black metal. Beggars Arkive now release a 30th anniversary vinyl reissue of their third highly acclaimed album Elizium, originally released by Beggars Banquet in 1990. Recorded and produced by Pink Floyd engineer Andy Jackson, the audio is via analogue transfer to 96khz/24 bit by John Dent at Loud, with vinyl mastering by Geoff Pesche at Abbey Road.

4.8 out of 5 stars
4.8 out of 5
99 global ratings
How are ratings calculated?
To calculate the overall star rating and percentage breakdown by star, we don’t use a simple average. Instead, our system considers things like how recent a review is and if the reviewer bought the item on Amazon. It also analyses reviews to verify trustworthiness.

A. K. Sheikh
5.0 out of 5 stars Amazing! An Absolute Classic in Beautiful Packaging
Reviewed in the United Kingdom on 12 March 2021
Verified Purchase
I wrote an extensive review of this album decades ago, and though I’ll repeat much of it, In summary it’s one of the best rock records ever made and the most ambitious work by this underrated band. It’s presented here as a lovely green vinyl LP that’s very quiet in terms of background noise and clicks and pops, with beautiful artwork throughout it’s outer and inner sleeves.

To the album, then, and from the moody, swirly intro of “(Dead but Dreaming)”, across the linked rocker “For Her Light”, into the expansive “At the Gates of Silent Memory”, to the kick of “Paradise Regained”, you can hear this is a band at their peak taking goth (all the songs are about death) and progressive rock (segued sections, overarching album concept) and building something amazing and beautiful - and that’s just on the opening piece!

The psychedelia of “Submission” with its wobbly dub bass verses and wild wah-wah solos shows the diversity of their abilities and “Summerland” is a sprawling, driving epic of Floydian proportions.

The contemplative ^Wail of Sumer”, with its aching segued finale “And There Will Your Heart Be Also” round out the album on a perfect way, as the lead character’s soul submits to its fate, loosens its earthly grip and drifts into Elizium. Yes, it does sound overblown and self-important when described that way (this is a band named after a biblical race of human and fallen angel offspring, after all!), and the proggy, billowing sound of the album may have put off fans of their earlier harder-edged, punk-fuelled spaghetti-goth, but it’s a towering work, steeped in singer Carl McCoy’s obsession with the occult and Sumerian mythology. Alongside Paul Wright’s inventive arpeggios, Peter Yates’ immersive soundscapes, Tony Pettit’s alternately gallopping and spacious basslines and Nod Wright’s ever-excellent drumming, McCoy gives his most convincing, heartfelt and accessible vocal performance ever.

By the time the needle hits the run-off groove at the end of side two, you know you’ve been on a wonderous, enveloping journey.

Summing all this up in one word: Amazing!
Read more
Report abuse

Regaman
5.0 out of 5 stars Pure gold
Reviewed in the United Kingdom on 27 July 2012
Verified Purchase
Probably the best album by The Fields of the Nephilim anyway, certainly the easiest for non Neph fans. What a wonderful addition it is to have it done on a proper 180g vinyl after all this time. The packaging is pretty ordinary with a one page card inlay albeit in typical (meaning wonderful design) Nephilim style and a nice plastic inner sleeve, but the quality of the music and recording alone makes it a worthwhile purchase. For anyone out there considering it, even if you do own the album, its never sounded so good, its like being back in 1990.
Read more
One person found this helpful
Report abuse

joker1961
5.0 out of 5 stars NEPHILIM ON VINYLLLLLLLLLLLLLL
Reviewed in the United Kingdom on 24 May 2013
Verified Purchase
This vinyl by Fields Of The Nephilim. Elizium is a replacemeant as i played it to death. Its powerful, apocalytic, moving, dark,
GOTHIC ROCK. AT ITS BEST. Fronted by enigmatic, flamboyant, occult shamanic showman CARL McCOY.
Buy this it will change your feeling within the NEPHILIM SOUNDS!!!!!.

Baz
5.0 out of 5 stars On time no damage
Reviewed in the United Kingdom on 9 December 2020
Verified Purchase
Excellent in all respects.
Read more
Report abuse
See all reviews
Back to top
Get to Know Us
Make Money with Us
Let Us Help You
And don't forget:
© 1996-2021, Amazon.com, Inc. or its affiliates