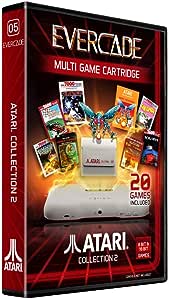 Fastest delivery: 4 - 8 Dec
Ships from and sold by Amazon UK.

4.8 out of 5 stars
4.8 out of 5
120 global ratings
How are ratings calculated?
To calculate the overall star rating and percentage breakdown by star, we don’t use a simple average. Instead, our system considers things like how recent a review is and if the reviewer bought the item on Amazon. It also analyses reviews to verify trustworthiness.

Ejay
5.0 out of 5 stars Great selection of classic Atari games!
Reviewed in the United Kingdom on 11 June 2020
Verified Purchase
20 Classic Atari games from the 2600 and 7800 consoles. Nicely presented and collectable cartridge with full colour printed guide. Must-have for any classic Atari fan, includes the 7800 versions of Centipede and Asteroids and other games such as the 2600 versions of Millepede and Yars Revenge and lots more. Complements the Atari Collection 1 cartridge to give a library of 40 classic 8-bit Atari games, all licensed and legal in a physical format you can collect and keep.
Read more

DPW
5.0 out of 5 stars Good collection
Reviewed in the United Kingdom on 19 August 2020
Verified Purchase
A second collection 20 8-bit Atari games which should bring memories for fans. Well worth the price.
Read more
Report abuse

Robert P. Inverarity
5.0 out of 5 stars Stone cold classics and some underexposed gems
Reviewed in the United States on 8 July 2020
Verified Purchase
This collection contains more stone-cold classics for my money than the pack-in volume 1, but no surprise delights quite like Aquaventure. If you hate the 2600 era, I can’t really recommend it, but if you are open to really early games, these are pretty rewarding. Now, these are all first-party Atari games, and first-party Atari games are rather infamous for not pushing the envelope on graphics and complexity the way Activision did. Third-party games were the lifeblood of the 2600, so I hope we see some of them eventually.

It’s the 7800 games make this a really outstanding value for me and force me to bump up my score to a 5. Awful sound chip aside, the 7800 games are all gems, and their presence alone would make me pick this cartridge up for a measly couple sawbucks.

Let’s talk about each game on offer in brief.

Asteroids (7800) - hands down my favorite version of Asteroids, even including the arcade game and Super Asteroids. It’s fast, agile, fun, and it looks good too. I’m looking forward to trying out the Lynx upgrade to this when the Lynx collections arrive.

Yars' Revenge (2600) - while Activision is the king of the 2600, this is my single favorite game. The gameplay loop is incredible, with the perfect balance of attack and defense. It might feel fiddly until you get the rhythm, but I promise it’s worth pushing through until you do.

Millipede (2600) - while I prefer the pure and simple Centipede to the overly complicated Millipede in the arcade, I prefer this quite a bit to the 2600 Centipede. The additional layer of gloss on the graphics and the additional complexity of the ruleset makes for a more satisfying home console experience.

Basketbrawl (7800) - this is NBA Jam, many years before NBA Jam existed. It even has powerups like Tournament edition. It isn’t quite as entertaining as NBA Jam - especially in the sound department - but it’s still great fun.

Centipede (7800) - the closest thing to the arcade version people had at home for many years. My favorite home version of it.

Solaris (2600) - arguably the most beautiful 2600 game, and a darn fine forward scrolling shooter on a system that had many worthy entries.

Sprintmaster (2600) - top down racing like I long to see on the Evercade, but I just can’t get used to the controls. Very impressive graphics for the system, though!

Submarine Commander (2600) - a hidden gem of the catalog, this combines fast action with an interesting rhythm and good strategy. Spend some time with it if you never have!

Haunted House (2600) - the original survivor horror game. You need to find scans of the manual to play this, if you don’t already know. It’s still fun, but can be bewildering.

Planet Smashers (7800) - this is a really interesting take on the vertical scrolling shooter, with bosses reminiscent of Phoenix. It is HARD, though. The graphics are very 2600-esque for a 7800 game. The fact that 7800 games have a reset button on the keypad is really unfortunate.

Bowling (2600) - I can’t explain why, but this early bowling sim is really fun. I think it’s the wish fulfillment aspect of being able to spin your ball the way you want at any time you want as it rolls down the lane. Different modes take this ability away, but why?

Radar Lock (2600) - very reminiscent of Solaris in graphics and gameplay, but not quite as fun. It required using the second joystick to change weapons, and I haven't figured out how to do that yet...

Human Cannonball (2600) - It's like playing Scorched Earth with one player, except you have to catch the shell. Weirdly meditative. I've spent a lot more time playing this than I can explain.

Street Racer (2600) - The two-player games on here are the perfect way to experience being an only child in 1978. The uncontrolled second player almost beats me every time.

Air Sea Battle (2600) - A little bit more fun than Street Racer, but it's still a two-player game without two players.

Realsports Tennis (2600) - It's not Activision's Tennis, but it's pretty good!

Dark Chambers (2600) - Very advanced survival horror for the 2600. I haven't figured out how to play this again yet.

Wizard (2600) - an unreleased prototype where you have to seek out an invisible enemy. The enemy doesn't seem to move in either game mode, which makes it a little too easy and repetitive to be fun.

Demons to Diamonds (2600) - This weirdly complex and oddly trippy game always confused me on the actual 2600. Thanks to the Evercade, I finally figured out how to play it! It's not quite as fun as using a paddle controller (what is?) but it works surprisingly well with a d-pad.

Mason
5.0 out of 5 stars Got this for Dark Chambers, Stayed for Solaris
Reviewed in the United States on 6 August 2020
Verified Purchase
Got this for Dark Chambers which my son is addicted to. Solaris, however, is a seriously interesting game worth playing and investing some time into, and the save game (save state) feature makes it and any other "adventure" something you can enjoy in little slices of your time. The main downside with any of the Atari games is a lack of 2 player capability, but overall I'd give this collection on the Evercade high marks for doing a good job of bringing Atari games to a handheld format. I've seen many worse implementations and hackery on DIY or cheap emulator systems.
Read more
One person found this helpful
Report abuse

sdhco
5.0 out of 5 stars Evercade Atari Cartridge Collection 2 - Electronic Games
Reviewed in the United States on 24 June 2020
Verified Purchase
A great way to play retro games on an Atari Handheld.
Read more
2 people found this helpful
Report abuse
See all reviews
Get FREE delivery with Amazon Prime
Prime members enjoy FREE Delivery and exclusive access to movies, TV shows, music, Kindle e-books, Twitch Prime, and more.
> Get Started
Back to top
Get to Know Us
Make Money with Us
Let Us Help You
And don't forget:
© 1996-2020, Amazon.com, Inc. or its affiliates