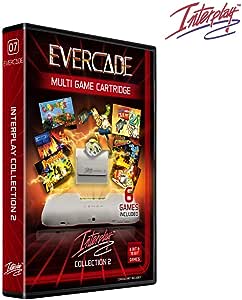 Brand: Evercade
Platform : Sega Genesis, Electronic Game, Nintendo Super NES, Nintendo NES
4.7 out of 5 stars 107 ratings
Currently unavailable.
We don't know when or if this item will be back in stock.

4.7 out of 5 stars
4.7 out of 5
107 global ratings
How are ratings calculated?
To calculate the overall star rating and percentage breakdown by star, we don’t use a simple average. Instead, our system considers things like how recent a review is and if the reviewer bought the item on Amazon. It also analyses reviews to verify trustworthiness.

Robert P. Inverarity
5.0 out of 5 stars Interesting games from a sadly forgotten publisher
Reviewed in the United States on 29 June 2020
Verified Purchase
EDIT: well, in the fullness of time, I’ve spent more time with this cartridge than any other except the Piko one, so I’m awarding it an extra star. Rad Gravity and the Brainies did not seem like games I would pour hours into originally, but save states do enough to sand down their rough edges that they’ve become real favorites of mine.

The Interplay collections were part of what sold me on the Evercade, so it's been a little surprising that I haven't enjoyed them more. They are smaller than most collections, and they have games that have more nostalgia value than modern-day gameplay value. The Interplay vaults are large and deep, so I hope they excavate more gems in the next set of releases. But for the price, this is still a very worthwhile purchase. Let's go game by game.

The Adventures of Rad Gravity: This initially unassuming game, which I thought was an enhanced C64 or PC port initially, is quite good. It's a combat-heavy, exploration-heavy platformer with puzzle elements. It's not exactly a Metroidvania, but it's kind of in that vein - maybe a Metroid Man. The difficulty is pretty punishing at first, but once you get used to it you’ll get far with minimal save state scumming. I recommend spending quality time with this - it goes really unexpected places with some really great graphical design choices in a hurry! My favorite thing about the Evercade is discovering great games I’ve simply never heard of, and this is near the top of the list.

The Brainies: This puzzle title from Titus, which starts with a bizarrely sexy cinematic, is a rather standard block-pusher, except in this case the characters themselves are the blocks. It has something in common with Chew Man Fu on the TG16. It's really weird, and frustratingly makes you play a tilted Mode 7 world after making you look at a top-down map that would be more usable - which costs you time from the extremely rigorous clock! It's pretty fun after you get used to it, but I recommend save-state scumming to make the rough edges in the original game less of a problem.

Clayfighter 2: Judgment Clay (get it, get it, like Terminator 2 lol now you understand the humor involved here): significantly worse than the original, missing some of my favorite characters, and just plain not very fun. It looks much less clay-like than the first game. It is one of the fairly small number of actual fighting games on the console thus far, so there's that.

Claymates: The far and away best title on the compilation, this is a stone-cold classic with a strong Kirby vibe and really great level design and gameplay. It is a little floaty for my tastes, but it's easy to get past that and enjoy this for what it is. I'd probably have bought the compilation for this alone, and been quite happy with it at that.

Earthworm Jim 2: If you loved Earthworm Jim, but wished it had a lot less actual platforming substance and a lot more random weird one-off levels, you'll love Earthworm Jim 2! For me, it's a definite step down from the original in terms of substance and fun. It's interesting and fun in its own right, but it feels like they collected all the gimmick ideas they didn't have time to implement in Earthworm Jim and added a few platform levels to string them together. This is as far as I am aware the only official rerelease of the SNES version, which had different background art and the ability to change weapons vs. the Genesis version.

Prehistorik Man: This Titus platformer isn't quite as fun as the Joe and Mac series or the Bonk series, but it's very interesting and quite beautiful, at least in the early going. It's very hard, quite complex, and a bit too fiddly, and thus very much in line with the Euro-platformer philosophy that the Evercade so far specializes in. I don't expect to finish this game, but I'll enjoy what I can from it. (As an aside, what WAS it with the 90s and cavemen, anyway? Fully 10% of the Evercade titles, Atari collections excepted, seem to be caveman-adjacent.)
Read more
One person found this helpful
Report abuse

Justin
5.0 out of 5 stars Interplay brings 6 Great Games to Add to your Evercade Library!!
Reviewed in the United States on 28 June 2020
Verified Purchase
Interplay Collection 2 is a must own for any Evercade player!! This collection is everything I remember about Sega Genesis!! Earthworm Jim 2, Clay Fighters 2, this set picks up right where Collection 1 leaves off. It’s great to have these games back in a pick up and play capacity!!
Read more
One person found this helpful
Report abuse
See all reviews
Get FREE delivery with Amazon Prime
Prime members enjoy FREE Delivery and exclusive access to movies, TV shows, music, Kindle e-books, Twitch Prime, and more.
> Get Started
Back to top
Get to Know Us
Make Money with Us
Let Us Help You
And don't forget:
© 1996-2020, Amazon.com, Inc. or its affiliates