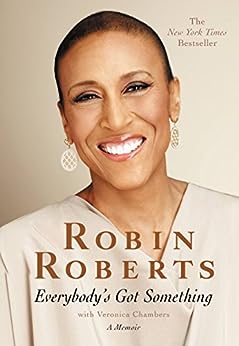 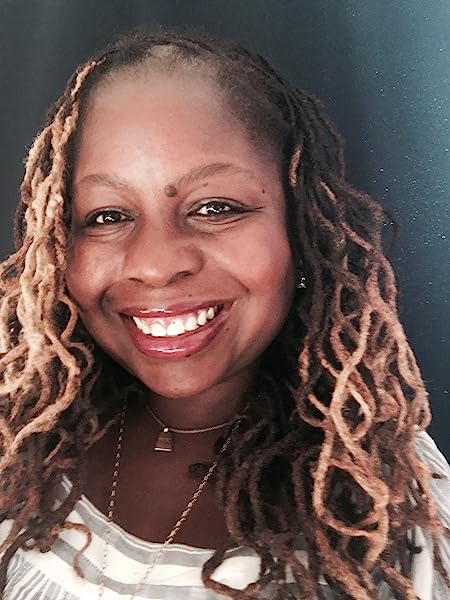 Everybody's Got Something Kindle Edition

by Robin Roberts (Author), Veronica Chambers (Author) Format: Kindle Edition
See all formats and editions
Sorry, there was a problem loading this page. Try again.
"Regardless of how much money you have, your race, where you live, what religion you follow, you are going through something. Or you already have or you will. As momma always said, "Everybody's got something."

So begins beloved Good Morning America anchor Robin Roberts's new memoir in which she recounts the incredible journey that's been her life so far, and the lessons she's learned along the way. With grace, heart, and humor, she writes about overcoming breast cancer only to learn five years later that she will need a bone marrow transplant to combat a rare blood disorder, the grief and heartbreak she suffered when her mother passed away, her triumphant return to GMA after her medical leave, and the tremendous support and love of her family and friends that saw her through her difficult times.

Following her mother's advice to "make your mess your message," Robin taught a nation of viewers that while it is true that we've all got something -- a medical crisis to face, aging parents to care for, heartbreak in all its many forms --- we've also all got something to give: hope, encouragement, a life-saving transplant or a spirit-saving embrace. As Robin has learned, and what readers of her remarkable story will come to believe as well, it's all about faith, family and friends. And finding out that you are stronger, much stronger, than you think.
Read more
Previous page
Next page

[Roberts] offers readers a deeply intimate and endearing glimpse into the human side of battling illness.

As a sports broadcaster and Good Morning America anchor, Robin Roberts has been in the public eye for more than thirty years. She has covered the devastation of Hurricane Katrina on her hometown; interviewed Miley Cyrus as a guest star on Hannah Montana; and been inducted in the Women's Basketball Hall of Fame; but perhaps nothing she did touched the public more than the candor she displayed when speaking about her mother's death and her own rare blood disorder. In a sense, her late mother presides over this book, one of her habitual comments serving as its title. As always, Roberts' reflections on her experiences are never exercises in self-pity; rather, they serve as examples of problems that we all have.

Roberts is both astonishingly honest and refreshingly upbeat as she recounts the shock of discovering she once again had to fight for her life...Delivered with candor and optimism, Everybody's Got Something is a remarkable book that offers a blueprint for handling crises with grace and faith.

Roberts offers an inspiring memoir of her life, from her home base in Mississippi to her home in New York and the glamorous though grueling life of a television reporter...With the infectious personality for which she's known, Roberts details the support of family and friends and the people she's met in her life and career who've inspired her by overcoming their own challenges with the 'something' that everybody inevitably faces. Inspiring.

This follow-up to TV news anchor Roberts's previous audiobooks offers personal growth principles abstracted from her experiences...The assertiveness in her voice works well to express the determination she had to summon when facing a life-threatening disease that required a bone marrow transplant in 2012. Her fans will enjoy the chatty narratives about her celebrity life and medical travails that dominate this memoir. What everyone facing a health challenge will savor is how Roberts uses her grounding in Southern culture to remind us of the importance of gratitude, hope, and strong connections with family members.

With the assistance of Chambers, broadcaster Roberts chronicles her struggles with myelodysplastic syndrome, a rare condition that affects blood and bone marrow...Inspirational memoir about a journalist's battle with a grave disease she had to face while also dealing with her mother's passing.

-- "Kirkus Reviews" --This text refers to the audioCD edition.

Robin Roberts (Author) Robin Roberts is the anchor of ABC's Good Morning America. Under her leadership, the broadcast has won three consecutive Emmy Awards for Outstanding Morning Program and became the #1 morning show in America. Prior to that, Roberts was a contributor to ESPN.Veronica Chambers (Author) Veronica Chambers is the author of the critically acclaimed memoir, Mama's Girl as well as Kickboxing Geisha's and The Joy of Doing Things Badly. --This text refers to the audioCD edition.

A inspirational memoir by the beloved host of Good Morning America. --This text refers to the audioCD edition.

Veronica Chambers is a prolific author, best known for her critically acclaimed memoir, Mama's Girl which has been course adopted by hundreds of high schools and colleges throughout the country. Her other non-fiction books include Kickboxing Geisha's: How Japanese Women Are Changing Their Nation and The Joy of Doing Things Badly: A Girl's Guide to Love, Life and Foolish Bravery. She has also written more than a dozen books for children and spent two seasons as an executive story editor for CW's hist series, Girlfriends. A graduate of Simon's Rock College at Bard, she lives with her husband and daughter in Hoboken, New Jersey.

--This text refers to the audioCD edition.
Read more

4.7 out of 5 stars
4.7 out of 5
774 global ratings
How are ratings calculated?
To calculate the overall star rating and percentage breakdown by star, we don’t use a simple average. Instead, our system considers things like how recent a review is and if the reviewer bought the item on Amazon. It also analyses reviews to verify trustworthiness.

Amazon Customer
5.0 out of 5 stars Five Stars
Reviewed in the United Kingdom on 21 September 2017
Verified Purchase
This was such an inspirational book!
Read more
Report abuse

Viktor Penner
5.0 out of 5 stars Amazing.
Reviewed in the United Kingdom on 20 March 2017
Verified Purchase
Came even so much sooner than I expected it to come. Amazing.
Read more
Report abuse

N.S.
5.0 out of 5 stars Best book I've read
Reviewed in Canada on 9 May 2014
Verified Purchase
What A WONDERFUL LADY. Wake up every morning to see Robin. inspiring, beautiful, down to earth and sincere. Will read this book again. could not put it down.
Read more
One person found this helpful
Report abuse

Barbara
5.0 out of 5 stars Robin.
Reviewed in Canada on 7 November 2016
Verified Purchase
I chose this book because I saw the video of your battle. You have the strength and courage that I hope I would have. Awesome book. Loved every single page. Keep well.
Read more
Report abuse

Willie o sullivan
4.0 out of 5 stars CANCER
Reviewed in Canada on 18 May 2014
Verified Purchase
THE TITLE GOT ME I HAVE NOT READ IT BUT BOUGHT IT FOR MY 62 YEAR OLD SISTER WHO IS NOW GOING THROUGH A BATTLE WITH 2 ND. TIME AROUND BREAST CANCER WILLIE
Read more
Report abuse
See all reviews
Back to top
Get to Know Us
Make Money with Us
Let Us Help You
And don't forget:
© 1996-2022, Amazon.com, Inc. or its affiliates