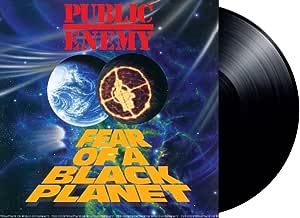 Fear Of A Black Planet

The original LP version of Fear of a Black Planet will also be released in a collector's vinyl edition for the first time in 15 years, with a special 'fade to black' 3D cover that, when turned to the left or right, turns black, with just the band's iconic cross-hairs visible.

Fear of a Black Planet, which celebrates its 25th anniversary in 2015, finished #300 on Rolling Stone's list of the '500 Greatest Albums of All Time' and was added to the Library of Congress' National Recording Registry in 2005. The album is certified platinum by the RIAA for more than one million shipped, peaking at No. 10 on the Billboard 200. Writes Wax Poetics editor-in-chief Torres in the liner notes, 'Though it sits in the shadow of It Takes a Nation of Millions to Hold us Back, Fear of a Black Planet is a formidable contender for one of the finest hip-hop albums ever recorded.'

4.8 out of 5 stars
4.8 out of 5
340 global ratings
How are ratings calculated?
To calculate the overall star rating and percentage breakdown by star, we don’t use a simple average. Instead, our system considers things like how recent a review is and if the reviewer bought the item on Amazon. It also analyses reviews to verify trustworthiness.

Tim
5.0 out of 5 stars Wicked
Reviewed in Australia on 9 November 2019
Verified Purchase
I had the t shirt when the album came but never got the album.so I had to grab it. Awesome
Read more
Helpful
Comment Report abuse
See all reviews

nathanialmayweather
4.0 out of 5 stars Deluxe Edition review...
Reviewed in the United Kingdom on 9 December 2014
Verified Purchase
Second of the new PE reissues feels less extravagant than the NATIONS deluxe reissue. The packaging loses that nice cardboard feel in favour of a gloss style digipak. The liner notes feel more thrown together and less impressive too.

On the plus side there are quite a few alternate mixes and b-sides present on a second accompanying disc.

Sound quality? This is the best *sounding* CD version yet but the difference feels more muted than the NATIONS reissue. Possibly due to the source material being better to begin with or perhaps a less exhaustive mastering process was undertaken? Who knows? The engineer is different to the one responsible for the NATIONS reissue certainly.
There is a bit more low end, vocals seem a little more natural but it doesn't feel like a veil being lifted or anything.

It is *still* however an improvement on the previous CD although whether that is worth £12 of your money is another story?

Now on to why I've only granted it 4 stars. There seems to be a mastering error on tracks 8 and 9 compared to the original CD.
The start of ANTI-NIGGER MACHINE seems to have the end of track 7 tacked on and the same thing happens on track 9 BURN HOLLYWOOD BURN with FLAV's intro to the song beginning at the end of track 8.

I'm pretty sure this is a mistake and frankly it's disappointingly sloppy that this wasn't spotted before pressing.

It doesn't affect things to much if you're listening to the album as a whole but if you only want to listen to those tracks (7,8,9) it's irritating that you miss the intro or the ending depending on which track you wish to hear.

This reissue is a case of mixed blessings ultimately.

I have been in touch with Universal Music Group and they have investigated the mastering error.

"The label have advised the original release was different and the timings have been changed since.
From a product's perspective this is correct, this version has the same time splits as the 1CD version on Spotify and in iTunes."

So there we are. I'm not convinced the new timings are right but they are apparently.

mark
5.0 out of 5 stars Great
Reviewed in the United Kingdom on 12 November 2019
Verified Purchase
Item as described and arrived on time so brilliant seller!
Read more
Report abuse

Amazon Customer
5.0 out of 5 stars Five Stars
Reviewed in the United Kingdom on 22 April 2017
Verified Purchase
fast - good value, great!
Read more
Report abuse
See all reviews
Get FREE delivery with Amazon Prime
Prime members enjoy FREE Delivery and exclusive access to movies, TV shows, music, Kindle e-books, Twitch Prime, and more.
> Get Started
Back to top
Get to Know Us
Make Money with Us
Let Us Help You
And don't forget:
© 1996-2020, Amazon.com, Inc. or its affiliates