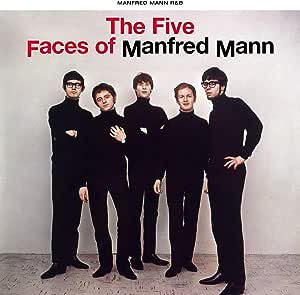 The Five Faces of Manfred Mann is the debut British and second US album by Manfred Mann. It was first released in the United Kingdom on 11 September 1964 by His Master's Voice. In late October/early November, the album was released in Canada by Capitol Records. The Canadian track listing was almost the same as the UK version, except it included the hit "Do Wah Diddy Diddy" instead of "I've Got My Mojo Working". The record has been called "one of the great blues-based British invasion albums; it's a hot, rocking record that benefits from some virtuoso playing as well".

4.8 out of 5 stars
4.8 out of 5
33 global ratings
How are ratings calculated?
To calculate the overall star rating and percentage breakdown by star, we don’t use a simple average. Instead, our system considers things like how recent a review is and if the reviewer bought the item on Amazon. It also analyses reviews to verify trustworthiness.

MikeQ
5.0 out of 5 stars Great 60’s music.
Reviewed in the United Kingdom on 21 January 2020
Verified Purchase
A great reissue on Umbrella records of the 1964 release. There is a good selection of early Manfred tracks and the quality of the disc is superb. There are a number of group penned tracks and the album gives a clue as tohow the band will develop. It is good to be able to listen to these 60’s songs again on the format I first heard them. Thoroughly recommend for any fan or lover of 60’s music.
Read more
Report abuse

D. J. H. Thorn
5.0 out of 5 stars Blues Mann
Reviewed in the United Kingdom on 13 August 2009
Verified Purchase
Paul Jones mentioned in a recent interview with Record Collector that he left the band because he didn't like MM's move toward pop singles. This, the band's debut album shows what they were originally about, and it stands as one of the early classic r&b albums by a British band. Their brand of blues was rather more measured than the Stones, Yardbirds, Animals, etc. They went more for finesse than frenzy. 'Smokestack Lightning' is a good example. Jones also revealed that he was nettled by the general perception that The Yardbirds' version of the song was the best available. The Yardbirds' version is a pumped up, live version, whereas MM's is slower and more insidious.

Nevertheless, MM can blow harder when they want to, as on 'Sack O' Woe', but all of the tracks are beautifully crafted. A personal favourite is 'I'm Your Kingpin', probably the best of the six original tracks. As is often the case, EMI don't provide bonus tracks or new sleevenotes, which doesn't bother me, but will disappoint some. Instead, they reprint the original notes and the disc remains about 40 minutes. A great album regardless.

Mr. Alan T. Wakeman
5.0 out of 5 stars Manfred Mann with the original lead singer Paul Jones.
Reviewed in the United Kingdom on 11 October 2018
Verified Purchase
Classic 1960's R&B. If you like the genre you'll like this. All the members of this iconic band went on to have serious careers in the music business.
Read more
Report abuse

mystyrtee
5.0 out of 5 stars manfreds
Reviewed in the United Kingdom on 14 April 2014
Verified Purchase
The best and first of the Manfrrds record's, showing their Rhythm and Blurd roots. Great delivery. Thank you for this.
Read more
4 people found this helpful
Report abuse

A. Beard
5.0 out of 5 stars Wow: I played it again and again!
Reviewed in the United Kingdom on 13 November 2017
Verified Purchase
Wow: I played it again and again!
Read more
Report abuse
See all reviews
Get FREE delivery with Amazon Prime
Prime members enjoy FREE Delivery and exclusive access to movies, TV shows, music, Kindle e-books, Twitch Prime, and more.
> Get Started
Back to top
Get to Know Us
Make Money with Us
Let Us Help You
And don't forget:
© 1996-2020, Amazon.com, Inc. or its affiliates