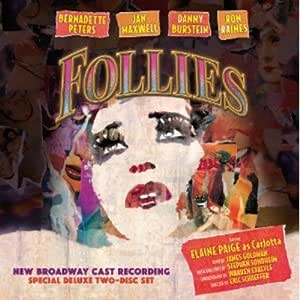 Composer-lyricist Stephen Sondheim and librettist James Goldmans landmark 1971 musical returns to Broadway in FOLLIES. Now, PS Classics and producer Tommy Krasker - who has helmed over a dozen Sondheim cast recordings - preserve this unparalleled work of genius in an expansive two-disc set, complete with 52-page full-color booklet with essay, synopsis, lyrics, production photos and a brief note (below) from the album producer.

4.6 out of 5 stars
4.6 out of 5
119 global ratings
How are ratings calculated?
To calculate the overall star rating and percentage breakdown by star, we don’t use a simple average. Instead, our system considers things like how recent a review is and if the reviewer bought the item on Amazon. It also analyses reviews to verify trustworthiness.

My Ob
5.0 out of 5 stars Couldn't be better
Reviewed in Australia on 6 September 2020
Verified Purchase
If you like Sondheim, you'll be happy with this recording.
Read more
Helpful
Comment Report abuse
See all reviews

Eric H.
5.0 out of 5 stars 'FOLLIES' Sondheim's Masterpiece: Entire score
Reviewed in the United Kingdom on 8 October 2015
Verified Purchase
If ever one needed a comprehensive insight into Sondheim's finest musical ( there are tunes here!) then look no further than this recording of Follies. In the history of cast recordings, you never get the whole story, just the numbers & maybe not all, very little story etc .here on 2 discs we get the full works, the complete score & added dialogue. The complex story of the main characters is explained in the most comprehensive booklet ever to accompany a cast recording & is invaluable to anyone coming to this musical who hasn't actually seen a performance. This is a remarkable achievement & well worth it just to hear Bernadette Peters sing 'Losing my Mind'. Elaine Page & other Broadway stars in this revival bring an honesty & soul-bareing to their rôles,lacking in other recordings, but here the added dialogue links the songs to the story. The former 'Follies' performers gather at the old theatre before it is demolished & recollect their memories & are shadowed by their younger selves. Mis-matched partnerships & mid-life crises are conveyed in Sondheim's brilliant score, which captures the era of the old show tunes & the angst of the early 70's where this musical is set. Future productions of FOLLIES have their work cut out if they are to top this effort!
HIGHLY RECOMMENDED.
Update on this review added 23/06/2017:
The National Theatre on Londons's South Bank will mount a production of FOLLIES later this year with Imelda Staunton leading a distinguished cast. The show will be presented on the theatre's Olivier stage and will be the musical theatre event of the Autumn.
Fingers will be crossed that the production will be an unqualified success, ensuring a possible transfer from the subsidised sector to a commercial theatre after its initial run.
Good Luck to all concerned!
Update to this review: 17/11/2017.
The production at the National opened to unqualified 5 Star reviews and is the finest staging yet! There are no plans for a commercial transfer as the show is of monumental proportions and although it has just had a live relay to cinemas, it will not have a DVD release, though it is to be hoped that a cast recording will be made available.
FEBRUARY 2018 update: The National Theatre have just announced that ‘FOLLIES’ will return to their repertoire early next year (2019) before a hoped-for transfer to the commercial sector....
In the meantime enjoy this excellent Broadway version.
Eric H.

martin ridgwell
5.0 out of 5 stars next best thing to being there
Reviewed in the United Kingdom on 7 June 2014
Verified Purchase
I think I have every recording of Follies on vinyl, but his CD recording of the 2011 Broadway revival is my favourite. One of the reasons why I love this recording is because in between the songs are extracts from the books dialogue, so you really get a sense of a story unfolding in front of you rather than just a collection of great songs.Bernadette Peters is ( for me ), the definitive Sally Durant, just the right mix of vulnerability and annoyingness, a lost soul. When she says; " I'm 49 years old, that's all I am. What am I going to do?" it's such a wake up call for a woman who has managed to spend all her life cocooned in a fantasy world of her own making - genuinely tragic and hopeful at the same time. Maybe because I was fast approaching 49 it affected me more than it might affect others !

The really interesting thing about Follies, and maybe the reason why it's never been a great public success, is that these people that we have to spend a couple of hours with, are not very nice people. But the brilliance of the songs reveal why they are like they are. Jan Maxwell is amazing as Phyllis, you end up actually liking her, she allows just enough of the Lucy into her Jessie so to speak. Infact we end up, if not exactly liking all the characters, then at least we care for them.

Hard to imagine anyone singing Im Still Here after Elaine Strich original version ( there's a video on YouTube ), I would imagine any actress would be scared to death of covering that song with Elaine looking over their shoulder, but Elaine Paige doesn't try to steal it from her. Hers is a different performance entirely, it's a fun performance.

This is how a stage recording should be, not just a set of songs, but a taste of the actual show. Treat your self to a copy
Read more
5 people found this helpful
Report abuse

DUFF.
5.0 out of 5 stars follies
Reviewed in the United Kingdom on 7 February 2020
Verified Purchase
very good album if you like musicals you will love this cd.
Read more
Report abuse

christine siddall
5.0 out of 5 stars Great!
Reviewed in the United Kingdom on 14 October 2013
Verified Purchase
I am a Sondheim fan & was recently in this show. This is a great version with some useful dialogue to keep the story moving. It lives up to the hype!
Read more
3 people found this helpful
Report abuse
See all reviews
Get FREE delivery with Amazon Prime
Prime members enjoy FREE Delivery and exclusive access to movies, TV shows, music, Kindle e-books, Twitch Prime, and more.
> Get Started
Back to top
Get to Know Us
Make Money with Us
Let Us Help You
And don't forget:
© 1996-2020, Amazon.com, Inc. or its affiliates