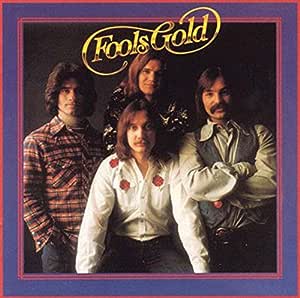 Digitally remastered edition. American country rock quartet Fools Gold were originally the backing band for Dan Fogelberg and made this one album for Arista Records in 1976. Half the album was produced by Glyn Johns (Rolling Stones) and the other half by Glenn Frey (The Eagles). Playing on this long lost country rock classic are Joe Walsh, Glen Frey, and Don Felder and has a distinct California/Eagles sound. Guitarist Tom Kelly would go on to enjoy success as a songwriter co-writing with Billy Steinberg hits for the likes of Madonna, The Bangles, The Pretenders and Whitney Houston. The remaining members of the band still play and perform to this day.

4.6 out of 5 stars
4.6 out of 5
22 global ratings
How are ratings calculated?
To calculate the overall star rating and percentage breakdown by star, we don’t use a simple average. Instead, our system considers things like how recent a review is and if the reviewer bought the item on Amazon. It also analyses reviews to verify trustworthiness.

Outastace
5.0 out of 5 stars Long forgotten gem of California country rock
Reviewed in the United Kingdom on 18 June 2017
Verified Purchase
I first heard this album while staying with my cousin in Edmonton, Canada, in 1976. It was on his turntable nearly every day of my month-long stay and has been embedded in my consciousness ever since. I rushed out and bought the LP when I returned to Britain but promptly lost it and put it to the back of my mind. I didn't forget this wonderful album, though. Fools Gold were employed as Dan Fogelberg's backing band when he toured but so impressed Arista boss Clive Davis he signed them up on the spot. This, their debut album, features contributions from Eagles Glen Frey and Don Felder and is, somewhat predictably, exactly the kind of sunny, harmony-drenched, singalong country-rock music that was so popular in the Seventies. Indeed, it stands comparison with early Eagles albums. I stumbled across the CD while browsing Amazon recently and had to buy it there and then. As I waited for it to be delivered I began to wonder if my memory might have played tricks on me and the album would be mediocre and nothing out of the ordinary. Boy, was I wrong! This is a lovely album that fans of The Eagles and the Desert Rose Band will relish - beautiful, mid-tempo songs embellished with pedal steel guitar filigree, harmonies galore, a tasteful blend of acoustic and electric guitars. This might be a 41-year-old album but it's as sprightly as a teenager kicking up the sand on a Santa Monica beach.
Read more
2 people found this helpful
Report abuse

tony forehan
5.0 out of 5 stars No Fool's Gold Here.
Reviewed in the United Kingdom on 13 January 2018
Verified Purchase
I've been chasing this on CD for many years. What a great album!!
I see it as the classic Californian sound of the '70's - layered harmonies underpinning a strong lead vocal, acoustic rhythm guitars, melodic tasteful guitar solos and thoughtful arrangements.
I know these guys spent a good deal of their time backing Dan Fogelberg and it is a shame they only recorded two albums as "Fools Gold", but let's be grateful for what we got, and what we got here is one damn fine record!!

Og Oggilby
4.0 out of 5 stars Excellent Mid Seventies Country Rock
Reviewed in the United Kingdom on 10 May 2017
Verified Purchase
This album- the self-titled debut album by Fool's Gold, Dan Fogelberg's stage backing band, is an extremely accomplished, very melodic and musically varied set, that the band never bettered. With guest slots from the likes of Joe Walsh, Glenn Frey and Don Felder of The Eagles, and a polished production sound that is slick without being bland, it's a prime example of Californian Country Rock of the mid-1970s. A minor gem that any fans of The Eagles, Poco, Pure Prairie League and others of that ilk will find much to enjoy here. Informative sleeve notes, too.
Read more
One person found this helpful
Report abuse

Try4the sun
4.0 out of 5 stars Overlooked Classic
Reviewed in the United Kingdom on 13 March 2017
Verified Purchase
If you're a country rock fan, then do not miss this treasure from 1976. It's a blend of Pure Prairie League, Eagles, and Poco, with tremendous performances and harmonies. The songwriting is first rate, courtesy of band member Tom Kelly, who later on was responsible for co-writing Cindy Lauper`s `True Colours`, The Bangles `Eternal Flame`, and The Pretenders `I'll stand by You`. Essential listening.
Read more
One person found this helpful
Report abuse