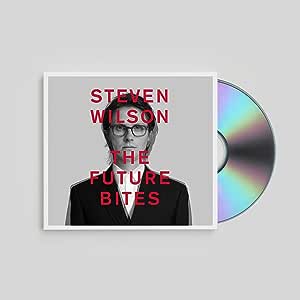 Secure transaction
Your transaction is secure
We work hard to protect your security and privacy. Our payment security system encrypts your information during transmission. We don’t share your credit card details with third-party sellers, and we don’t sell your information to others. Learn more
Details
Ships from
Amazon AU
Sold by
Amazon AU
New (12) from
$20.61 FREE Delivery on first order.

4.3 out of 5 stars
4.3 out of 5
662 global ratings
How are ratings calculated?
To calculate the overall star rating and percentage breakdown by star, we don’t use a simple average. Instead, our system considers things like how recent a review is and if the reviewer bought the item on Amazon. It also analyses reviews to verify trustworthiness.

Prog Is Not Dead
4.0 out of 5 stars Divisive
Reviewed in Australia on 9 March 2021
This album will divide Wilson fans like no other in his impressive catalogue.

Musically sparse, lyrically naive and yet something keeps drawing me back to listen again - what is it about this enigma of a musician and composer?

I have endeavoured to explain it to myself but have failed miserably, It is an album which is both forward looking and yet retrospective musically. The drum beats and synthesizers dominate and at times sound both eighties and modern.

Wilson is either the 'Einstein' of modern music or a total enigma beyond explanation.

At times I was reminded of Ulatravox circa 'Vienna' and 'Spandau Ballet' yet it was not dated in any way.

Confused and oddly happy at the same time - PLEASE HELP.

I found this album in a local record store at an attractive price - t was actually in the top twenty at number fourteen , which again is odd for an artist hardly a house-hold name!

Not prog and again not exactly mainstream. Pop but only just. I'm confused.

He has done the work - now it's your turn.

Mr. SJ Clarke
2.0 out of 5 stars LARGELY UNDERWHELMED.
Reviewed in the United Kingdom on 30 January 2021
Verified Purchase
Well, here I am with 2 versions of this album. The normal 1 x CD and a box set. I must be a fan, and with regret, I am largely underwhelmed. He's continued with the pop / mainstream direction that he started with 'To the Bone'. On that album those were mostly elements of aspirational success; on this new album most songs are lightweight throwaways, with synth'd interludes and what sound like drum machines. It seems as though he's going through the motions (I'm sure he's not) trying to reach a more mainstream audience. Sadly, he's left me somewhat behind. I wish him well, he deserves much more success than he has, but the sweeping prog rock of years gone by and the solo SW albums like 'Raven' and 'Hand' seem an awfully long time ago.
Read more
47 people found this helpful
Report abuse

Steviespitfire
2.0 out of 5 stars Not for me............
Reviewed in the United Kingdom on 30 January 2021
Verified Purchase
Im a massive Steven Wilson fan, love his solo work, love Porcupine Tree.
His last album was a bit hit and miss for me, there were some brilliant moments, but it was headed in a direction that was not for me. This latest album has arrived at that destination, dont like a single track on it. Production as usual is superb, but it leaves me compeletely cold. I had this same experience when Genesis released Invisible Touch.
Think Ill play "hand can not erase" to cheer myself up :)
Read more
30 people found this helpful
Report abuse

Outastace
5.0 out of 5 stars Another slice of Steven Wilson’s vision
Reviewed in the United Kingdom on 1 February 2021
Verified Purchase
Well, this is something of a departure, isn’t it? Another chapter in the ever-evolving career of Steven Wilson. You’ve got to give him credit for stretching the boundaries of so-called “prog rock.” It seems he’s moved on from the classic Porcupine Tree style - wonderful as it was - into something that manages to simultaneously combine numerous genres. For instance, the fourth track, 12 Things I Forgot, boasts a catchy tune and a Pink Floyd style female chorus - something that reappears throughout the album - to successfully update the PT/SW brand for the modern age.

In many ways this track is classic pop with a customary Wilsonian twist and one that lovers of the artist’s short and long-form styles should appreciate. Eminent Sleaze, which follows, marries falsetto Prince-like vocals, a dirty bass riff resembling something off Jeff Wayne’s War Of The Worlds, EuroDisco strings and stabs of Dark Side Of The Moon electric piano to produce a slithering, r’n’b workout. The chaotic guitar solo towards the end feels like a homage to Robert Fripp.

Elsewhere, Man Of The People is a precise and quite lovely song that reminds me of a slowed down Tame Impala track with the kind of guitar work Kevin Parker seems to have abandoned. Again, Wilson’s falsetto is perfect for the beautifully ominous soundscape he has created. Personal Shopper, a treatise on rampant consumerism and the CD’s longest track, references Heaven 17 as it motors along powerfully, graced by that falsetto vocal, an earworm female chorus and the spoken words of Sir Elton John.

In the end, The Future Bites requires perseverance if only to appreciate the many ideas Wilson uses to create music that in turn is poppy, heavy, electronic, soulful, disturbing, joyful and energetic. Fans of Porcupine Tree might claim it isn’t proggy or metallic enough while others might not like the use of a female chorus or journeys into r’n’b, but in the end this is a challenging and worthy addition to Wilson’s canon. I wouldn’t go as far as to say it is a masterpiece, as some reviewers have claimed, but I’m glad I have it in my collection. And I’m sure that repeated listenings will reveal more of Steven Wilson’s unique vision.
STOP PRESS: After playing this album non-stop since I received it, here are some further thoughts: The Future Bites is every bit as relevant as Wilson’s earlier material. I rather like the falsetto voice that decorates some of the tracks - Man Of The People manages to be soulful and proggy at the same time, while Count Of Unease is blissfully beautiful, a languid reminder that Wilson is peerless at creating achingly simple melancholy. No one track may not have the widescreen appeal of Drive Home from The Raven That Refused To Sing but TFB is an engaging listen that reveals its brilliance over time. Highly recommended.
Read more
17 people found this helpful
Report abuse

Adam Canfield
5.0 out of 5 stars Personal Favourite
Reviewed in the United Kingdom on 30 January 2021
Verified Purchase
There are certain things in life that will never change. One of those things is Steven Wilson's comparisons to his younger-Porcupine-Tree-self. I admittedly yearn for a PT revival myself, however do not expect that from Wilson whatsoever.
This, however, is closer to the latter PT style than any of Wilson's other solo albums. Guitars are electric, melodies are catchy and songs are cleverly constructed. I am not sure why the PT fanboys are needlessly up-in-arms.
On another personal note (I'm far from a guru) I love the aesthetics of the whole package; album art, CD packaging and the album's theme.
I am looking forward to becoming as familiar with this album as Wilson's previous ones so that I can compare the collection more accurately.
Read more
16 people found this helpful
Report abuse
See all reviews
Back to top
Get to Know Us
Make Money with Us
Let Us Help You
And don't forget:
© 1996-2021, Amazon.com, Inc. or its affiliates