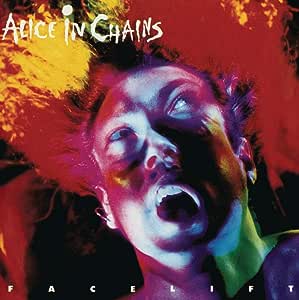 Secure transaction
Your transaction is secure
We work hard to protect your security and privacy. Our payment security system encrypts your information during transmission. We don’t share your credit card details with third-party sellers, and we don’t sell your information to others. Learn more
Details
Ships from
Amazon US
Sold by
Amazon US
New (12) from
$43.03 + $3.00 Delivery

To celebrate the 30th anniversary of Alice In Chains debut studio album, Facelift, a standard black vinyl reissue with remastered audio will be released on November 13, 2020. Not only did the album introduce the world to Layne Staley, Jerry Cantrell, Sean Kinney, and Mike Starr, it was also a pivotal album in the era of grunge music. Facelift has sold over 2 million copies in the US alone and includes the hits Man in the Box," "Bleed the Freak," "We Die Young," and "Sea of Sorrow."

4.8 out of 5 stars
4.8 out of 5
1,928 global ratings
How are ratings calculated?
To calculate the overall star rating and percentage breakdown by star, we don’t use a simple average. Instead, our system considers things like how recent a review is and if the reviewer bought the item on Amazon. It also analyses reviews to verify trustworthiness.

G. B. Tansey
1.0 out of 5 stars Cheap packaging
Reviewed in the United Kingdom on 27 November 2020
Verified Purchase
What an awful cheap looking vinyl package. Can’t believe it was £30 and AIC actually released it!! So poor!!!
Read more
5 people found this helpful
Report abuse

Andy Moore
5.0 out of 5 stars Been waiting for this.
Reviewed in the United Kingdom on 14 January 2021
Verified Purchase
Nice, double-disc version. Playing time each side is short due to it being spread over two discs. But this is good for sound quality. Inner sleeves aren't poly-lined. Non gatefold jacket.

B1 Bleed The Freak
B2 I Can't Remember
B3 Love, Hate, Love

C1 It Ain't Like That
C2 Sunshine
C3 Put You Down

anton martin
5.0 out of 5 stars Brilliant Debut !
Reviewed in the United Kingdom on 16 June 2013
Verified Purchase
This is a great 1st album that any band should have been proud to make. Although it's production is more understated than "Dirt", It still is in my opinion on a par with "Dirt" for songs. "Dirt" has more peaks and troughs, with of course some standout classics. "Dirt" is a darker and can leave you yearning for hope album. This is perhaps it's only slight flaw, but then again this is only my opinion. Facelift on the other hand has more lyrical subject matter variety. I don't think that in all the years of listening to rock vocalists I have heard anyone with the artistry and flair that Layne Staley had - truly amazing!
He pretty much covers all the human emotions there are to sing in this record.
There are influences, namely Black Sabbath through to Led Zeppelin Listen to the similarity between Zepps classic
"Since I Have Been Loving You", on Led Zepp III and Alice in Chains classic "Love Hate Love" and you can hear the influences.
"Man in a Box" is the other real standout track on this, but apart from these two, their are a lot of good tracks with excellent guitar playing from Jerry Cantrell to compliment Staley's remarkable singing talents Very recommended!
Read more
2 people found this helpful
Report abuse

Mr. A. G. Pilgrim
5.0 out of 5 stars Grunge rock pleasure
Reviewed in the United Kingdom on 18 September 2008
Verified Purchase
This is Alice In Chains debut album. And it's a heavy, hard rock/metal affair. While not as lyrically dark as their second album, and ultimate masterpiece, Dirt. It nevertheless establishes Alice In Chains outside of the underground. ALice In Chains were more metallic than their contemporaries and it's noticeable throughout the album. Top songs include: Man In The Box (which was heavily rotated on MTV), Sea Of Sorrow, Real Thing, We Die Young. They became regulars on college radio in America, but didn't breakthrough until their second album DIRT. Which I recommend you buy as well. I just love this album to bits. This is one of the most important breakout records from the early 90's that helped establish grunge (and Seattle) as a force to be reckoned with. It will be looked back years to come as one of the defining rock albums of the nineties.
Read more
2 people found this helpful
Report abuse

MrMills73
5.0 out of 5 stars A must have Album!
Reviewed in the United Kingdom on 18 November 2015
Verified Purchase
Brilliant Album! Every track a winner! Not as good as their follow-up album, the seminal classic that is Dirt, but a great fore-runner in establishing that formidable AIC sound! Fans of the band will not be disappointed and newcomers should likewise be drawn in to AIC Grungy, heavy metal sound with which we all love! Standout tracks are album opener We Die Young, with it's cool groove and Crushing riffs, follow on track Man in a Box,another great tune and the Amazing Bleed the Freak, which you'll either be singing along with or humming for weeks! Great album. Highly Recommended. Get it in!
Read more
One person found this helpful
Report abuse
See all reviews
Back to top
Get to Know Us
Make Money with Us
Let Us Help You
And don't forget:
© 1996-2021, Amazon.com, Inc. or its affiliates