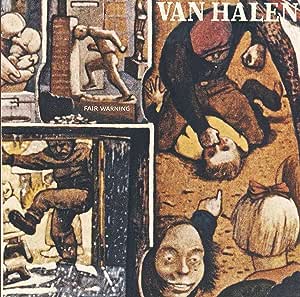 Secure transaction
Your transaction is secure
We work hard to protect your security and privacy. Our payment security system encrypts your information during transmission. We don’t share your credit card details with third-party sellers, and we don’t sell your information to others. Learn more
Details
Ships from
Amazon US
Sold by
Amazon US
New (5) from
$43.84 & FREE Delivery

Van Halen s 2x Platinum album. Mastering engineer Chris Bellman, who remastered the original albums at Bernie Grundman Mastering Studios, was enlisted for this new version. In order to produce the original sound the band intended, Bellman cut straight from the quarter-inch tapes for CD; for 180-gram vinyl; and for the digital versions.

4.7 out of 5 stars
4.7 out of 5
657 global ratings
How are ratings calculated?
To calculate the overall star rating and percentage breakdown by star, we don’t use a simple average. Instead, our system considers things like how recent a review is and if the reviewer bought the item on Amazon. It also analyses reviews to verify trustworthiness.

Derek Clacton
5.0 out of 5 stars Fair Warning - a flawed masterpiece?
Reviewed in the United Kingdom on 25 August 2020
Verified Purchase
Fair Warning is what I'd describe as Van Halen's brilliantly dark flawed masterpiece (we'll get to the flawed bit). One look at Eddie's choice of album cover and you know this isn't going to have an update of "Dance The Night Away".  I bought this album when it was released and was blown away by the approach - although similar to the previous album (Women and Children First) having all original tracks, it was much darker.  The opener "Mean Street" is one of VH's longest numbers (at 5 mins.) - what an intro, with Eddie's guitar tone now razor sharp and David Lee Roth's lyrics as bleak as can be.  "Dirty Movies" is sheer sleaze and "Sinners Swing!" shows why Eddie is the riff and rhythm king.  "Hear About It Later" ended the LP side 1 - with its gentle intro and chorus it comes as quite a surprise after the onslaught but turns out to be only a brief pause in proceedings as side 2 carried on the metal meanness with "Unchained" - Ed's drop D tuning and flangerized (is that a word?) riff dimming the already dark tone even more.  The mood lightens slightly with the reggae-infused "Push Comes To Shove" and more so with "So This Is Love?", a typical VH party number, with great bass from Michael Anthony, Eddie ripping into his solo and a familiar DLR tale of female fancification (not sure if that's a word either!).

And now for the flawed bit.  Fair Warning ends with two tracks which are both 2 min numbers - "Sunday Afternoon In The Park" and "One Foot Out The Door".  Van Halen albums had always been short (30 - 33 mins) and this one was no different, but the instrumental "Sunday Afternoon In The Park" is a synthesizer-driven sonic splodge - not somewhere I want to spend a Sunday afternoon (or any afternoon).  Then there's the throwaway "One Foot Out The Door" - apparently they were being rushed to finish the album (which had taken over a week to record!).  Although Eddie's superb extended outro solo comes to the rescue, the damage had been done.  So, for me, there's only 28 mins of worthwhile material here - albeit very worthwhile material.  The album was not as successful commercially as it's predecessors but artistically is arguably the band's best.  No big hit singles this time, although "Unchained" would become a firm live fave. So a flawed masterpiece is how I'd describe it.
Arguably Van Halen's finest hour (or half-hour).

VH records always sounded great due to producer Ted Templeman and engineer Donn Landee's skills in the studio but also because they were so short (which suited vinyl) - although they never seemed short to me at the time.  The remaster sounds great - just like the LP and like the rest of the 2000 remaster series it has a 3 page fold-out inlay with the original artwork from the album inner sleeve.  Although sometimes it can be good to have bonus tracks and a booklet with an essay, photos and reviews etc., I'm more than happy to have this 'just as it was' and let the original product do the talking.  It's more than capable.
Read more
Report abuse

Amazon Customer
5.0 out of 5 stars One of the best rock acts ever, and one of their best albums ...
Reviewed in the United Kingdom on 12 August 2019
Verified Purchase
Excellent album, tunes vary from the bludgeoning Unchained / Mean Street to less heavyweight deliveries, Eddie Van Halens startling guitar work accompanied by a driving rhythm section and Dave Lee Roths charm at the vocal helm ..one of the best rock albums ever ...
Read more
Report abuse

Яυdı̣̣ Harı̣̣maηsyaɧ™
5.0 out of 5 stars Keren Banget Gaesss!!!!
Reviewed in the United Kingdom on 24 November 2018
Verified Purchase
What kind i say about Van Halen record....amazing!!!... Cause I'm big fans of them....this record is still one of the great album of Van Halen... Thanks to Amazon.co.uk
Read more

5.0 out of 5 stars Keren Banget Gaesss!!!!
Reviewed in the United Kingdom on 24 November 2018
What kind i say about Van Halen record....amazing!!!... Cause I'm big fans of them....this record is still one of the great album of Van Halen... Thanks to Amazon.co.uk
Images in this review

NICHOLAS RAY
5.0 out of 5 stars Great Album
Reviewed in the United Kingdom on 8 November 2020
Verified Purchase
This is a great album
Read more
Report abuse

Read more
7 people found this helpful
Report abuse
Translate review to English
See all reviews
Back to top
Get to Know Us
Make Money with Us
Let Us Help You
And don't forget:
© 1996-2021, Amazon.com, Inc. or its affiliates