$40.54
+ $10.76 delivery
Sold by: ErgodeBooks Ships From USA.
$83.84
+ FREE Delivery
Sold by: Books Mela Aus
Flip to back Flip to front
Listen Playing... Paused   You're listening to a sample of the Audible audio edition.
Learn more
See all 3 images 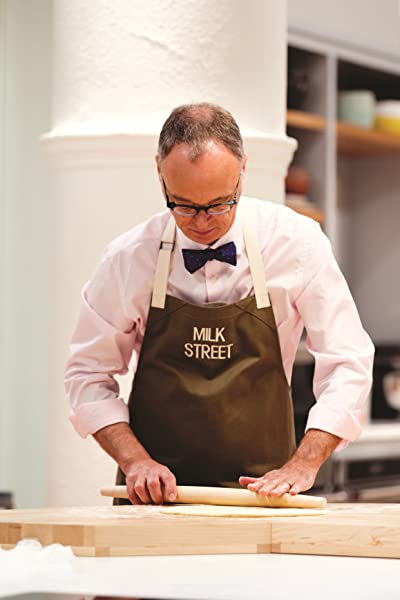 Chris Kimball founded Cook's Magazine in 1980; it has grown to a paid circulation of 1,000,000. He hosts America's Test Kitchen and Cook's Country, which are the top-rated cooking shows on public television, reaching 2 million viewers per week in over 94% of American households. Kimball is a regular contributor to both the Today Show and the CBS Early Show. He has been written up in most major newspapers, many national magazines including The New Yorker and Time, and regularly contributes to NPR's Morning Edition, including doing a regular Thanksgiving segment. He will also host a public radio show on cooking starting in the fall of 2010.

4.1 out of 5 stars
4.1 out of 5
61 global ratings
How are ratings calculated?
To calculate the overall star rating and percentage breakdown by star, we don’t use a simple average. Instead, our system considers things like how recent a review is and if the reviewer bought the item on Amazon. It also analyses reviews to verify trustworthiness.

R. Parsons
4.0 out of 5 stars A Good Try
Reviewed in the United States on 24 April 2015
Verified Purchase
Kimball's idea to re-create a great Victorian meal was indeed clever. Not so clever was the idea to use Fannie's cookbook, then find it necessary to re-write many of the receipts because they did not come up to Kimball's understanding of what they were to be. It is an awkward historical fact that there were bad foods and bad tastes in every historical period. So what is billed as a great Victorian meal is really a Kimball meal, much less instructive thereby. Kimball's purchase of a fine Victorian solid-fuel range was marred by taking inadequate time to learn its use. The machine did not immediately perform to Kimball's expectations; it is a bad workman that blames his tools. As a long-time user of solid-fuel ranges (three different ones and counting), I find that any fault with the cooking lies with the cook and not the range.
Read more
11 people found this helpful
Report abuse

Kriti Godey
3.0 out of 5 stars Lots of fun facts, but odd attitude.
Reviewed in the United States on 16 February 2012
Verified Purchase
I'm a big fan of America's Test Kitchen, and I love reading about food and history, so I was really looking forward to reading Fannie's Last Supper by its host and founder, Christopher Kimball. The book's tagline is "Re-creating One Amazing Meal from Fannie Farmer's 1896 Cookbook", and is (purportedly) about recreating an elaborate dinner party from Victorian-era Boston, based on the recipes of Fannie Farmer, a famous cooking teacher and businesswoman from the time.

About the title - although Kimball was certainly inspired by his discovery of Fannie Farmer's cookbook, I would not go as far as to say his meal was a recreation. He does not seem to respect Farmer as a cook or as a person, which makes for odd reading. His reactions to exact recreations of her dishes range from "inedible" to "truly horrible" to "rather uninspired" to "second rate." (There is the occasional "good", but it is rare.) This means that pretty much all of the recipes were changed quite a bit. A few of the recipes were even sourced entirely from other books, after Farmer was deemed unsatisfactory. This is all fine, but it seemed like false advertising.

The book is peppered with fascinating facts and insights into the world of the 19th century cook. The industrial revolution was changing cooking at an extremely rapid rate, plus domestic servants were no longer common. Kimball likens it to a music aficionado in the late 1990s (p. 193): "who used a turntable for his LP collection while relying on a large group of CDs and then a smattering of digital downloads from iTunes on his MP3 player." I loved that description (although, what about cassette tapes? that's what I used in the 90s) - I think it's a great analogy.

I think the structure of the book could have been easier to read - part of it deals with the evolution in cooking methods and ingredients in the US, some of it is about how Boston's food culture and how that changed (including random little details like the price of gelatin), some of it is about Fannie Farmer's life, and then there's the story of Kimball's journey to making this dinner, testing recipes, finding silverware, etc. The trouble is that each chapter contains a bit of everything. I think it would've showcased the material far better if it had been better structured, although it is still really interesting.

I also appreciated a lot of the trouble that they went to to make the dinner accurate - mock turtle soup using calf-brains, and making gelatin from calf-feet stand out. It sounded like a horrendous amount of work.
Read more
9 people found this helpful
Report abuse

Lona Hansen
3.0 out of 5 stars Christopher Kimball visits the nineteenth century
Reviewed in the United States on 9 December 2010
Verified Purchase
Our local library did not order the book which should have warned me. I am a subscriber to both Cook's Illustrated and Cook's Country (which Kimball edits) so I was familiar with his approach. However, I was more amused than enlightened by this book and felt it should have been subtitled "Christopher Kimball visits the nineteenth century and finds it wanting."

The idea of recreating the elaborate holiday meal from the 1896 Boston Cooking School Cookbook was intriguing. However, the recipes were revised to current tastes. I would have been more interested if the recipes had been cooked as written and the guests' reactions recorded. The guest list also appeared to have been chosen to maximize book publicity or show whom Kimball knows.

My main disappointment with the book is Kimball's dismissal of anything he does not understand. The best example is his contempt for a recipe instructing a cook to time pouring molasses by singing a verse or verses of a hymn. Kimball forgets that many 19th century cooks would not have had a clock or watch available to time. (In fact, aren't we advised to time hand washing by singing Happy Birthday?)

He also often dismisses tastes that he does not like as mistakes or Fannie Farmer's incompetence, seldom noting (other than wine) that tastes change in a hundred and fourteen years. The heavy sauces he deplores show up in other Victorian cookbooks and were probably desired in contemporary tastes. Even American cookbooks of fifty years ago show changes in tastes in that time to now.

I don't have a problem with looking for recipes from other sources; in 1896 Kimball's cook would have done this. Kimball never seems to realize how similar his work force was to a very large Victorian kitchen since he could draft the entire staff of his test kitchen for this venture. He must have given the frequent recent references to Fannie Farmer in Cook's Illustrated and Cook's Country.

I felt the history was light and would advise reading the books in the bibliography, particularly Laura Shapiro's Perfection Salad, for history Perfection Salad: Women and Cooking at the Turn of the Century (California Studies in Food and Culture)The Fannie Farmer Cookbook: AnniversaryThe Victorian Kitchen .
Read more
13 people found this helpful
Report abuse

S. Herlihy
5.0 out of 5 stars Historical Fun
Reviewed in the United States on 16 January 2014
Verified Purchase
The book is slightly misleading. This isn't an entirely recreated meal from the time. What it is is a look at just how food customs have changed over the years. We are led through an amusing romp in turn of the century Boston cookery. At every turn, the reader can only be grateful that times have indeed changed and we are no longer eating brain balls or dealing with ovens with such firepower. A must for anyone interested in culinary history. Or just willing to enjoy completely disgusting descriptions of foods we thankfully no longer have to eat.
Read more
One person found this helpful
Report abuse

Ramonita Ortiz
5.0 out of 5 stars Is an amazing book, that bring us back to a beautiful ...
Reviewed in the United States on 5 January 2017
Verified Purchase
Is an amazing book,that bring us back to a beautiful era we all will love to visit ,bring us back to a Boston we will love to go back. Love the Lobster Americaine.We should all have a last supper style dinner in this time,Fascinating!!!
Read more
Report abuse
See all reviews
Back to top
Get to Know Us
Make Money with Us
Let Us Help You
And don't forget:
© 1996-2021, Amazon.com, Inc. or its affiliates