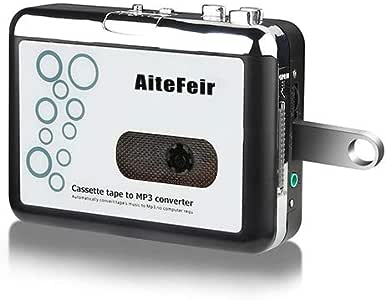 Imported from Japan or USA. It takes about 2 to 3 weeks to arrive.

There is a very thin protective film on it. This is New condition item, not used one! Go to youtube, type in EC-007U2 get more video information!!

3.5 out of 5 stars
3.5 out of 5
240 global ratings
How are ratings calculated?
To calculate the overall star rating and percentage breakdown by star, we don’t use a simple average. Instead, our system considers things like how recent a review is and if the reviewer bought the item on Amazon. It also analyses reviews to verify trustworthiness.

Kirk Merrell
5.0 out of 5 stars buttons are small
Reviewed in Canada on 14 July 2019
Verified Purchase
ease of use, must read instructions carefully as is sometimes confusing.
Read more
Report abuse

Dr R K SANGHAVI
1.0 out of 5 stars Recording on USB is Not User-Friendly
Reviewed in India on 15 October 2020
Verified Purchase
Doesn't bifurcate in between the songs - continuous; how can this be acceptable?
Read more
Report abuse

David B. Minter
3.0 out of 5 stars It does a decent enough job for converting audio cassettes to MP3.
Reviewed in the United States on 17 April 2018
Verified Purchase
This device records MP3's at 128 KBPS, which is about half the size of the maximum sound quality you'll get from MP3. So, I'm not too pleased with that, but it does a decent enough job for the price. It's a little bit cumbersome to use, but nothing a glance over the manual won't fix. The sound quality isn't the best, because you do get digital pops and beeps at the start of recording. It does have a handy feature that when it reaches the end of a side of a cassette, it automatically rewinds to the beginning of the 2nd side and keeps recording without a pause. Naturally, this will produce a prolonged pause in the recording. Nothing a good audio editing software on PC can't fix.

EDIT 2018-06-26: The fast forward function stopped working. So, though these units appear to do the job decently enough, they don't appear to be of decent quality construction as I rarely used that function. This is in addition to auto repeat repeating forever when I didn't have that function enabled, and that it worked initially. Given these factors, I have to say these devices may be cheaply made.

EDIT 2018-30-2018: And now the thing doesn't stop recording when the record button, used to stop recording, is pressed. I have to remove the USB flash drive from the unit to stop recording. Thankfully, this works without incident, but it just further illustrates the apparently cheap quality of these devices.


Read more
46 people found this helpful
Report abuse
See all reviews
Get FREE delivery with Amazon Prime
Prime members enjoy FREE Delivery and exclusive access to movies, TV shows, music, Kindle e-books, Twitch Prime, and more.
> Get Started
Back to top
Get to Know Us
Make Money with Us
Let Us Help You
And don't forget:
© 1996-2020, Amazon.com, Inc. or its affiliates