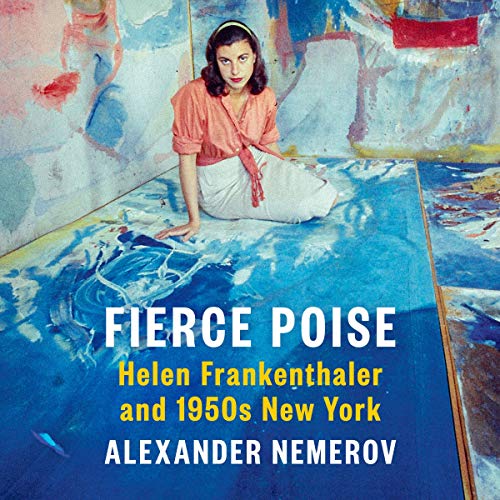 One of Vogue's Best Books of the Year

A dazzling biography of one of the 20th century's most respected painters, Helen Frankenthaler, as she came of age as an artist in postwar New York

“The magic of Alexander Nemerov's portrait of Helen Frankenthaler in Fierce Poise is that it reads like one of Helen's paintings. His poetic descriptions of her work and his rich insights into the years when Helen made her first artistic breakthroughs are both light and lush, seemingly easy and yet profound. His book is an ode to a truly great artist who, some 70 years after this story begins, we are only now beginning to understand.” (Mary Gabriel, author of Ninth Street Women)

At the dawn of the 1950s, a promising and dedicated young painter named Helen Frankenthaler, fresh out of college, moved back home to New York City to make her name. By the decade's end, she had succeeded in establishing herself as an important American artist of the postwar period. In the years in between, she made some of the most daring, head-turning paintings of her day and also came into her own as a woman: traveling the world, falling in and out of love, and engaging in an ongoing artistic education. She also experienced anew - and left her mark on - the city in which she had been raised in privilege as the daughter of a judge, even as she left the security of that world to pursue her artistic ambitions.

Brought to vivid life by acclaimed art historian Alexander Nemerov, these defining moments - from her first awed encounter with Jackson Pollock's drip paintings to her first solo gallery show to her tumultuous breakup with eminent art critic Clement Greenberg - comprise a portrait as bold and distinctive as the painter herself. Inspired by Pollock and the other male titans of abstract expressionism but committed to charting her own course, Frankenthaler was an artist whose talent was matched only by her unapologetic determination to distinguish herself in a man's world.

Fierce Poise is an exhilarating ride through New York's 1950s art scene and a brilliant portrait of a young artist through the moments that shaped her.

Switch between reading the Kindle book & listening to the Audible narration with Whispersync for Voice.
Get the Audible audiobook for the reduced price of $14.99 after you buy the Kindle book.
Learn more about membership
By completing your purchase, you agree to Audible’s Conditions Of Use and Privacy Notice.
Sold and delivered by Audible, an Amazon company

4.2 out of 5 stars
4.2 out of 5
144 global ratings
How are ratings calculated?
To calculate the overall star rating and percentage breakdown by star, we don’t use a simple average. Instead, our system considers things like how recent a review is and if the reviewer bought the item on Amazon. It also analyses reviews to verify trustworthiness.

coletti
3.0 out of 5 stars shallow waters
Reviewed in Germany on 26 February 2022
Verified Purchase
admitting I was never really enthused by HFs work I must say this one didn‘t help. quit struggling after 2/3s - still completely in the dark regarding both her personality and her art. maybe she was indeed as shallow and entitled as this biography, in which case the author did a congenial job. sigh.
Read more
Report abuse

paul gervais
3.0 out of 5 stars All that's missing...
Reviewed in the United States on 1 April 2021
Verified Purchase
I very much enjoy biographies of artists. My current favorite is The Lives of Lucian Freud; I read both volumes and was enormously impressed with the depth of research and the volume of material the author presented in painting out these "lives," all very engrossing. I very much admire Frankenthaler's late work though am less interested in her paintings from the 50s when Gorky seemed to be forever lurking in the influential distance, and so I looked forward to this. This work is rather lean, but that in itself wouldn't have troubled me. Why did I find Frankenthaler's life dull, for the most part, as described here. Artists' lives are usually very colorful even when they are antisocial and have few friends. Artists have an inner flame, a voice and a vision, that makes them extraordinary. I can't help wonder if this book's short length is due to the fact that Frankenthaler's life was simply not very interesting in spite of relationships with Greenberg and Motherwell, or did the author just not know where to go to source the engaging narrative that might have portrayed her as dynamic. That said, Nemerov is a very fine writer even if in this book his art criticism relies too heavily on his good poetics.
Read more
15 people found this helpful
Report abuse

G. T. Bysshe
5.0 out of 5 stars not The Thinking Eye (as in Klee) but very much “the ardent eye.”
Reviewed in the United States on 28 April 2021
Verified Purchase
Frankenthaler may have been the first person in painting history to combine the universal desire of painters everywhere to remain conscious in the presence of their acts, with an actual “style” of painting that solely depends on “IT” alone.

Her wish is the equivalent of Cervantes: disposing, destroying (deconstructing in our time) all barriers between presence and action.

She has not Dante, but almost Blake leading us through Dante.. except there is no Dante. Or Blake.

She has not Rembrandt in the presence of St. Jerome in the Wilderness, she is without the Saint, but she has the wilderness (Durer, Mantegna), and/or the desert (Pinturicchio, Mantegna, van der Weyden.)

Bosch made the painting theme of hermit saints.
Consciousness in the presence of one’s acts is a hermit in the desert.

Frankenthaler supposedly never was drawn to drawing- nor thinking about form or figuration. or representation, or representing a representation. There are only paintings almost without words- almost anywhere- just reflections: not thinking, as in The Thinking Eye (Klee) but very much “the ardent eye.”

There was no personal working foreground in Frankenthaler’s history for the means to carry this out, as with Pollock’s lengthy evolution. Nor was she conflicted in any way. Around her was a period of new ground, which allowed her to walk, not without disbelievers, but in spite of them, ultimately making space. Despite many personal tragedies. Thus the fierce poise.

But equally important as Nemerov points out, she possessed William Empson’s Fifth Ambiguity: “a fortunate confusion” which Nemerov follows: “Empson analyzes Shelley’s poem “To a Skylark,”the bird becomes a star, then the moon, and the setting shifts from daylight to dawn to evening, the associations coming to the poet as he moves along. Helen worked in a similar way. As the skylark’s song suggests the otherworldly voice of poetry, its connection to mutable and heavenly sensations, “something absolute, fundamental, outside time, and underlying all terrestrial harmony,” Helen’s art was comparably religious in character.” (204-5)

Nemerov’s text originates from researched sources (217 to be precise) published at the end of the book, without any footnotes in the body of the text. In this group Nemerov is a stage director. There are some shortcomings to reading a book like this. One of them was the author’s many, many passing descriptions of people gathering and their photographs, also no less especially, of early paintings by Frankenthaler, which were not reproduced and impossible to find otherwise. Reproductions of such things are bound by fair use copyright limiting their resolution or privately owned and not visible at all.

This in no way subtracts from the authors text, but limits the expansion of the subject itself for first time art observers. I, and many other potential readers, have had the experience of walking by an 8x10 foot Frankenthaler painting in a museum at some time in our lives. But this does not cover the discussion in the book, and the absence of something to look at becomes only words.

This however does not diminish the many people that surface in this book, as characters, greatly enhancing the spin-off readers can receive. At times a crowded scene, openings by extension to others is rich. It only stands to reason that Frank O’Hara’s friendship would turn up, and I found myself opening my 30 year old copy of his work. And “A Raspberry Sweater” (Nemerov p.131). As Nemerov writes:“ O’Hara took his immediate surroundings and turned them into art.. a poem he wrote in the same weeks that Helen painted “Eden,” turns away from the wide world to concentrate only on a sweater the poet wears.”

And preceding this in O’Hara’s chronology is “A Step Away From Them”: “It’s my lunch hour so I go for a walk among the hum-colored cabs….a glass of papaya juice and back to work. My heart is in my pocket, it is Poems by Pierre Reverdy.” (the Cubist poet of Picasso and others. And so I am led there.) And further digressed to O’Hara’s “Why I Am Not A Painter,” a hilarious summation to their differences- Helen and Frank. Finally there is Frank’s phone call to Helen from is hospital bed, just hours before he died.

A review of the author’s other books points from whence the style of this book originates. One only has to contemplate briefly Nemerov’s book “Acting in the Night: Macbeth and the Places of the Civil War,” which attempts to connect the play “Macbeth” which Lincoln was watching when he was assassinated, to the entire war itself. The author writes it in.

FIERCE POISE offers detailed commentary on the artist’s early life using researched sources which range from her graduation at Bennington College in 1949 to the beginning of 1960. Nemerov introduces himself to the reader. The author’s father, Howard Nemerov, was one of Frankenthaler’s teachers at Bennington, but the author himself never met the artist. Born in 1963, Alexander Nemerov states he “was not in a position to have known the artist in any social way, but he harbored the idea of writing about her.” Frankenthaler since deceased, there appears to have emerged a time portal for the author to renew his feelings about the artist as more than just a subject. This solitary picture ultimately fades in the face of this book, itself built by the interests and contributions of a diverse group of participants, all dedicated to the life of Helen they knew, after her death.
Read more
8 people found this helpful
Report abuse

Akiko Jones
5.0 out of 5 stars What does it feel like to be a young woman painter in the 1950s
Reviewed in the United States on 9 July 2021
Verified Purchase
I thought I knew everything about Helen Frankenthaler’s early years as a painter It told me more about her relationship with Clement Greenberg and sadnesses in her and Motherwell’s lives. It has an intimate and poetic style of writing when his words are describing her paintings and her process of painting. For some reason I thought she had it easy but this book has insight into many things she did early on to insure her success. But the best part was I discovered some new paintings I really liked. As a painter I feel the author understands some of the ways a painter paints
Read more
6 people found this helpful
Report abuse
See all reviews