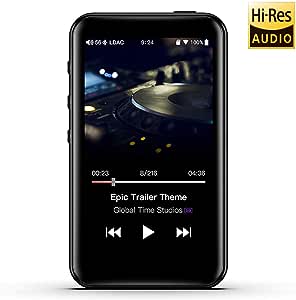 Brand: FIIO
4.0 out of 5 stars 720 ratings
Secure transaction
Returns Policy
Your transaction is secure
We work hard to protect your security and privacy. Our payment security system encrypts your information during transmission. We don’t share your credit card details with third-party sellers, and we don’t sell your information to others. Learn more

The M6 is FiiO's 3rd music player that made on Samsung's Exynos 7270 SoC (system on chip) which features Wi-Fi, AirPlay, USB DAC, USB audio out and full Bluetooth formats support.

4.0 out of 5 stars
4 out of 5
720 global ratings
How are ratings calculated?
To calculate the overall star rating and percentage breakdown by star, we don’t use a simple average. Instead, our system considers things like how recent a review is and if the reviewer bought the item on Amazon. It also analyses reviews to verify trustworthiness.

Gary Dimmock
5.0 out of 5 stars Fantastic little DAP and worth every penny
Reviewed in the United Kingdom on 16 January 2019
Color: BlackVerified Purchase
Had the M6 a couple of days coming from a similar sized touchscreen DAP. My requirements were.... Perfect gapless playback, touchscreen, good UI, simple to use and of course decent sound. A bonus would also be the ability to play from some streaming services and access my NAS over DLNA. Well what can I say, this little box of tricks does all off the above and does it very well indeed. Firstly the player is a decent size, not to big and not to small - ideal for pockets. The build quality is very good indeed and seems very solid.

I loaded up my trusty 128gb SD card - no scanning issues at all and everything seems perfect. The UI is simple and intuitive with the inclusion of some swiping gestures - ideal for touchscreen use. No issues with UI navigation, which is slick and seems well laid out.

I have added the ES file explorer app, as well as the Spotify app, very simple to do and a painless process. With ES file explorer I can access my NAS and play files on the M6 (the DLNA option in fiio music didn't locate it). Gapless is perfect as well.

This tiny box of tricks has a number of other features, but these were important to me and all work great. The sound the M6 produces is very good, I would say fairly neutral across the range which (for me) is great for iem pairing

All in all a fantastic little DAP and I would recommend

Clayton
2.0 out of 5 stars Nice, but flawed..
Reviewed in the United Kingdom on 24 September 2019
Color: BlackVerified Purchase
My old 1st generation Fiio X1 died from water damage, and it had been such a great device I decided stick with Fiio. I liked the look of the M9, but didn’t want to spend that much. I was tempted by the M7, but really fancied a device with WiFi and the ability to use music streaming apps.
I was about to give up on Fiio, but then they suddenly launched the M6. It seemed to offer everything I wanted, and a nice price, so it was a no brainier.

First impressions were good, build quality is excellent, made from aluminium with glass on the back as well as the front screen. Somewhat annoyingly, a screen protector for the back is fitted in the factory, but you have to put the one for the screen on yourself. I made a hash of it, and it looks unsightly. They do supply is a nice silicone case, which is nice touch.

Setting the device up was straight forward, I used the same memory card I used in my X1 , and the media library updated no problem. I’ve since used Media Monkey to add more music, and have had no problems. Using the screen and buttons is actually quite good considering how small this player is. It’s a generally nice device to use.

Sound quality is obviously a big factor with a dedicated music player, and the M6 performs very well here. The sound is clean, well defined, open and airy. For reference, it sounds better than my old X1, and better than my iPhone 6 (which is no slouch for sound quality). That’s using the headphone output, using line out and plugged into my HiFi, the sound quality is even better, in fact it’s outstanding.
One great feature is the device’s ability to act as a stand-alone DAC, and this can be via USB, or Bluetooth. I can connect my Samsung tablet to the M6 using LDAC Bluetooth, and use the tablet as a source. The M6 acts as a Bluetooth receiver, and DAC, outputting to my home system using line out. Extremely convenient, yet also very good sound quality.

Battery life: It’s supposed to be about 13 hours, and I would say it’s perfectly capable of this, as long as you leave the device continuously playing music, and nothing else. (I’ve observed 7% drain per hour). However, that’s not how most people use music players, and once you start using the screen, navigating around the device, using different apps, streaming, downloading, using line out, etc, battery life takes a big hit. In real world use, I would expect less than half the claimed battery life. On the plus side, the battery charges up quite quickly.

Issues: Unfortunately, despite this device ticking a lot of boxes, it does have some issues which can’t be overlooked. I think they are probably related to fact this device uses a processing chip from a Smartwatch, which isn’t at all powerful. I’ve used Tidal, Spotify, and Amazon Prime music apps on my M6, and they all have issues:

Tidal suffers from stuttering of music, mainly at the start of a track, but it can happen at any time if you dare to do other stuff at the same time, like browse for music. It’s worse with WiFi on, and gets worse when actually streaming music. Using Bluetooth at the same time is even worse, and it’s not even possible to use LDAC “Sound Quality Priority” whilst streaming, all you get is stuttering, no music.
To reduce stuttering to a minimum, I have to switch WiFi off, reboot the device and only use Tidal in offline mode. Even then it will still give a little hiccup now and again.

I unsubscribed from Tidal and tried Spotify. No stuttering! However, I had other issues: Whenever I turned the M6 on and opened Spotify, it would try and transfer all my downloaded music from my memory card to the device’s internal memory. I checked my Spotify account (using another device), and it seemed my M6 appeared in my “registered devices” list about 5 times, and it had hit the limit. I cleared this list, and it seemed to cure the problem.
However, I had been using Spotify offline mode in the M6, but when I went to open the app again, it asked me to log in. However, it wouldn’t let me do this, because I was offline. I couldn’t go online because I wasn’t logged in. Now, this might not have been the M6’s fault, but I never had this problem on any other device.

I then tried Amazon Prime Music (I already had a subscription), and whilst it does work, it’s incredibly slow. Upon opening, it takes a couple of minutes before being able to actually play music. The music doesn’t stutter like it does in Tidal, but you have to be very, very patient to appreciate it.

Even Fiio Music isn’t perfect, and I’ll often have to endure a tiny hiccup at the start of a track now and again. There’s a few other niggles too:

Whilst the Bluetooth DAC function works great for music, it’s no good for video, thanks to a lag of about half a second between video and audio.

The graphic equaliser function is poorly implemented. On my X1, turning on the EQ meant the maximum volume available was reduced, in order to avoid a distorted output at too high a volume. On the M6, turning on the EQ results in the current volume being reduced. This make easy A-B comparisons difficult when trying to compare EQ’d sound to un EQ’d sound. I also get the impression that the sound quality also drops a bit when turning on the EQ. Perhaps that’s just my imagination, though?

In deciding how many stars to give this product, I would have loved to have given 4 or maybe even 5 stars, because I do like Fiio products, and this M6 is very nice in many ways. I feel a bit mean only giving two stars, especially when it performs so well when used as a Bluetooth DAC connected to my home system. However, it’s primary use is as a portable music player, and in that role it fails to provide solid music playback, whatever app I try to use.
It might sound better than my iPhone 6, but because of the niggles, I find the IPhone is getting used more then the Fiio when out and about, which was never the idea when buying the M6.

I hold out hope that Fiio can address these performance issues with updates, but we’ve had two of them so far, and no improvement. Unfortunatley it seems Fiio are more concerned about adding more apps to the Whitelist rather than fixing issues, it seems odd that people buy a dedicated music player, and then badger the manufacturer to make it function more like a smartphone.

If Fiio can improve the M6, then I will consider revising my rating of this product...

UPDATE: April 2020, the device is 15 months old, and now has a load of horizontal lines on the screen. I think I’ll be looking at a different brand when it comes to getting another music player. Sorry Fiio, but this device has not been good enough.

ANOTHER UPDATE: June 2020, I went to use Tidal, and it said I needed to go online, which is normal after not connecting for a while. However, it wouldn't let me log in, with a message about an undetermined network error. I upgraded the M6 firmware, no difference. I uninstalled the Tidal app and downloaded it again from the Fiio website, still the same.
This appears to be a fairly common issue a tthe moment with this device, and some people recommend using certain versions of the Tidal app. I tried these different versions, still no joy. I can log in fine on all my other devices. I tried a different WiFi connection, and even a factory reset of the device.

So, Spotify never worked properly, and now Tidal has gone the same way. Amazon Prime Music does still work online ok, so I know the Wifi connection is good.

UPDATE: June 2020, I managed to find a version of Tidal that works, so at least the device is useful again.
Read more
8 people found this helpful
Report abuse