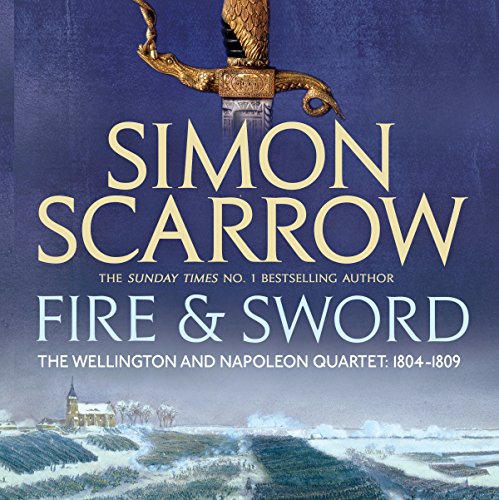 Napoleon and Wellington are one of history's most fascinating pairings, vividly symbolising the adversarial nature of French and English relations in the 17th century. Simon Scarrow brings this revolutionary time to life in this vivid historical account.

Fire and Sword is the pause-resisting third novel in Simon Scarrow's best-selling Wellington and Napoleon Quartet. A must-listen for fans of Robert Harris.

It's 1804. Napoleon Bonaparte is emperor of France, his ultimate aim to rule Europe. After defeat at the Battle of Trafalgar, he wins a glorious victory against Austria at Austerlitz. He then deposes the Spanish king and places his own brother on the throne. But he is yet to triumph over his most hated enemy: Great Britain.

Arthur Wellesley (the future Duke of Wellington) throws himself into the British campaign in Europe. After glory in Portugal, he commands the army in a series of triumphant battles across Spain. For those living reluctantly under French rule, his victories suggest that Napoleon's progress is not inexorable: freedom can be restored....

Switch between reading the Kindle book & listening to the Audible narration with Whispersync for Voice.
Get the Audible audiobook for the reduced price of $2.99 after you buy the Kindle book.
Last chance - Ends Thursday!
Learn more about membership
By completing your purchase, you agree to Audible’s Conditions Of Use and Privacy Notice.
Sold and delivered by Audible, an Amazon company

4.7 out of 5 stars
4.7 out of 5
388 global ratings
How are ratings calculated?
To calculate the overall star rating and percentage breakdown by star, we don’t use a simple average. Instead, our system considers things like how recent a review is and if the reviewer bought the item on Amazon. It also analyses reviews to verify trustworthiness.

Clemens A. Schoonderwoert
5.0 out of 5 stars A Magnificent Fire And Sword!
Reviewed in the United Kingdom on 8 January 2022
Verified Purchase
Read this book in 2009, and its the 3rd volume of the great "Wellington & Napoleon" quartet of books.

This book continues from the year AD 1804, and for Wellington (formerly Wellesley), although times are hard politically he will find solace as a military in Copenhagen, Portugal and Spain, while Napoleon has already established himself as a genius on the battlefield.

Emperor Napoleon is on the rampage throughout Europe and taking control, and now there's only one enemy left across the channel, Britain, while Wellington must try to oppose him and establish a foothold for Britain and his allies in Europe.

The time will come ever closer for the ultimate battle, but before that in this book many hard fought and desperate encounters will be fought out between the British forces and its allies against the might of Napoleon and his French Army.

What is to follow is a tremendous tale in which Wellington and Napoleon will show their geniuses and failures in battles to come and in their domestic lives, and all this is brought to us a most fascinating fashion by the author.

Highly recommended, for this is another great addition to this wonderful series, and that's why I like to call this episode: "A Magnificent Fire And Sword"!
Read more
Report abuse

Jeff
4.0 out of 5 stars OK in fits and starts
Reviewed in the United Kingdom on 11 February 2009
Verified Purchase
I felt this series started fairly well and then improved hugely with Book 2. Sadly, I feel this one is a slight blip ahead of what I'm confident will be a barnstormer to finish. There's a lot of politics here, inevitably I suppose, both in Britain and France and I'm afraid I tended to lose interest in Napoloeon's long slog in Austria. Whether it's me, or Scarrow, or both [?] but I felt he was much better when dealing with Sir Arthur. However, one thing the book achieved was to make me dislike both leaders who come across [probably rightly] as avid warmongers when the common people of both Britain and France were crying out for peace. Scarrow's research throughout is excellent but it's important to realise that this series is non-fiction. He's tried fairly successfully to make it read as a novel but there can be no getting away from the facts, given what he's set out to do. There is no Sharpe here, who can do more or less what he likes within broad historical parameters. Wellesley can't do that, any more than Napoleon. Book 4 will clearly be about the Peninsula and as such I look forward to it very much. Those who've read Sharpe will be at home! One more thing - the cover. It mentions that the book is about Wellington [sic] and Napoleon's attempt to dominate Europe. Then adds the idiotic question 'Who will win?'. And anyway, he won't be 'Wellington' until Book 4. It's the publishers' fault but I'm surprised Scarrow allowed it.
Read more
4 people found this helpful
Report abuse

Duo_87
5.0 out of 5 stars Gripping, entertaining and historical.
Reviewed in the United Kingdom on 7 June 2015
Verified Purchase
First in the four part series. I love history and reading it in an interesting and entertaining novel is even better. Yes, part of it is tweaked and manipulated so it is not as historically accurate as say a historical book on Wellington or Napoleon. That being said, Sinin Scarrow really knows his stuff and would only cut out what he thought was necessary. I really like his work and this is some of his best yet! Also, it's really exciting to read several chapters about one general and then switch to the other during the same time frame. It works well.
Read more
Report abuse

rob_hawke
5.0 out of 5 stars a great read!
Reviewed in the United Kingdom on 8 August 2010
Verified Purchase
when i found out that simon scarrow was writing another series i was excited and when i found out this was going to be about Wellington and Napoleon i was immensely looking forward to it! none of the books in the series so far have disappointed at all and the flicking between the 2 characters after a few chapters is just great and makes you not want to flick ahead to see what happens to each as the chapters leave it on a knife edge.

an excellent book to the backdrop of one of the most interesting points in history!
Read more
2 people found this helpful
Report abuse

De Feyter
5.0 out of 5 stars Scarrow at his best.
Reviewed in the United Kingdom on 22 February 2011
Verified Purchase
Funny as it might seem, I'm reading the book and I see lots and lots of research work that combined with a imagination tuned to "action mode" generates a great gripping book. It's hard to see which part is imagination and which part actually happened.
I'm able to put it down because sometimes my eyes just cant go that far and start to ache :)