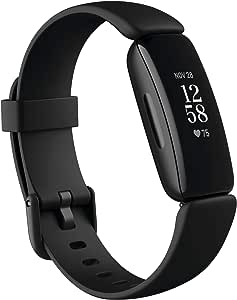 Make healthy a habit with Fitbit Inspire 2 and a free 1-year Fitbit Premium trial.* This easy-to-use fitness tracker packs 24/7 heart rate, Active Zone Minutes, activity and sleep tracking, up to 10 days of battery and more—and paired with step-by-step fitness & nutrition programs, personalised insights, and sleep tools from Premium, you have all you need for a healthier you.**Includes 2 Year Manufacturer Warranty

4.5 out of 5 stars
4.5 out of 5
449 global ratings
How are ratings calculated?
To calculate the overall star rating and percentage breakdown by star, we don’t use a simple average. Instead, our system considers things like how recent a review is and if the reviewer bought the item on Amazon. It also analyses reviews to verify trustworthiness.

Amazon Customer
4.0 out of 5 stars So far so good
Reviewed in Australia on 28 October 2020
Colour Name: BlackVerified Purchase
As advertised. Did not make use of premium membership as I don't want to give credit card details. It is up to buyer to remember to cancel membership. Not sure if heartbeat information is correct but helpful to know. Don't like having Bluetooth connected all the time so for me it's good but too many extras I don't need/use
Read more
Helpful
Comment Report abuse
See all reviews

Steve
5.0 out of 5 stars Well thought out device, extremely good health tracker
Reviewed in the United Kingdom on 3 October 2020
Colour Name: BlackVerified Purchase
My last Fitbit was the original Flex model, which lasted a good few years. I wanted something with a decent battery life, there's not much point having one of these devices if it spends an hour a day in a charging dock (like my Smart Watch, which doesn't really cut it as a fitness/sleep tracker)
I saw that this model also had HR tracking, so I thought that would also be worth having - what I didn't realise was that the HR tracking is _continual_ - it's always tracking, which given the long battery life, I find incredible.
I was slightly concerned about the lack of a physical button (the older Inspire model had a clicky/tactile button), but the one onboard the Inspire 2 is just as functional, it has haptic feedback so you can feel when you've pressed it and it's just as functional as the older style button.
The touch screen is very responsive and glides through the various displays with ease, but ultimately a device like this is for data gathering, any number crunching will be done on a phone/laptop, but the relevant real-time data points are all there (current HR, steps for day, active minutes, calories burnt and so on)
The wristband is basic but very comfy (and more importantly, stable - it doesn't slide/roll around the wrist), my initial thoughts were to replace the strap with something else, but after a few days of wearing it, I've realised that's it's just about right.
The included (year long) FitBit premium is a nice touch, I'm not sure how much benefit I'll get from this over and above the standard FitBit plan, but time will tell. Some of the premium features seem to include longer-term data analysis, so maybe this will prove useful. But I've set myself a reminder to cancel the automatic payment continuation next year, just in case I'm not using it.
Overall very pleased, the unit is put together really well and they've clearly honed the design over many years/iterations, it seamlessly integrates with your phone's app and was a breeze to setup.

Mr W N Barber
2.0 out of 5 stars Not compatible with IOS 13.4 and above!!!!
Reviewed in the United Kingdom on 26 September 2020
Colour Name: BlackVerified Purchase
Just spent 2 hours onto Fitbit helpdesk, as the fitbit is not getting notifications from my iPhone HR. It is running IOS 14.0.1. I was told after a lot of messing around that there is a problem with Fitbit getting notifications from IOS 13.4 and above. They had no answer to when this will be resolved!!!!! Beware
Read more
9 people found this helpful
Report abuse

Mr. Robin Guest
5.0 out of 5 stars Works Perfectly!
Reviewed in the United Kingdom on 29 September 2020
Colour Name: BlackVerified Purchase
I'm a bit surprised to read reviews on here saying that it's stopped working or doesn't sync...or doesn't work with iOS 14.

I've only had my Inspire 2 for a few days of course but so far everything works exactly as it should - even with iOS 14. The sync takes about 3 seconds every time and I've had no instances of the FitBit refusing to do anything.

You speak as you find so I can say...the Inspire 2 works perfectly and does everything I want it to!

Paul
1.0 out of 5 stars Useless would not recommend
Reviewed in the United Kingdom on 1 October 2020
Colour Name: BlackVerified Purchase
i've owned pedometers before and i track my steps accurately on my phone, however i had been recommended fitbit so i thought i would give the new inspire 2 a try.
the fitbit inaccurately records steps. i can clock up 1000 steps by driving for an hour with the fitbit on my wrist.
when i take it off my wrist and put it in my pocket it is more accurate ,however, doing this makes the HR feature completely useless ?
whats the point of having a step counter if its so inaccurate. dont be fobbed off by fitbits "wear it on your less dominant wrist " and reset the device. its all excusese to try and profit from a very bad fitness tracker.
Read more
4 people found this helpful
Report abuse
See all reviews
Get FREE delivery with Amazon Prime
Prime members enjoy FREE Delivery and exclusive access to movies, TV shows, music, Kindle e-books, Twitch Prime, and more.
> Get Started
Back to top
Get to Know Us
Make Money with Us
Let Us Help You
And don't forget:
© 1996-2020, Amazon.com, Inc. or its affiliates