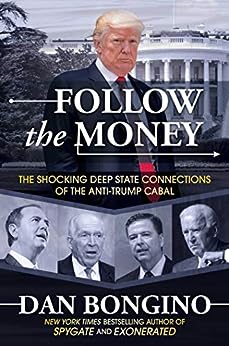 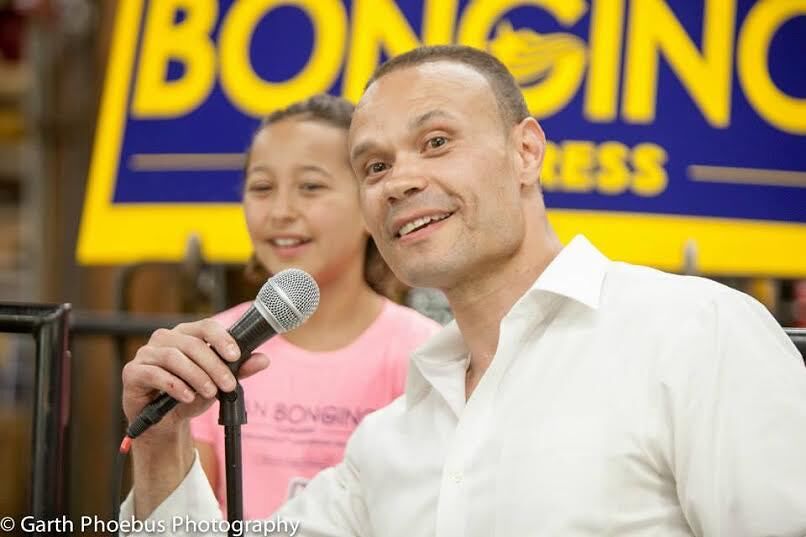 Dan Bongino is a former Secret Service agent, NYPD Police Officer, and a former Republican nominee for the U.S. Senate and the House. He is a multiple-time New York Times bestselling author and he is the host of the top-ranked podcast The Dan Bongino Show. --This text refers to the hardcover edition.

4.9 out of 5 stars
4.9 out of 5
3,844 global ratings
How are ratings calculated?
To calculate the overall star rating and percentage breakdown by star, we don’t use a simple average. Instead, our system considers things like how recent a review is and if the reviewer bought the item on Amazon. It also analyses reviews to verify trustworthiness.

Serenity...
5.0 out of 5 stars ~~Another Stellar Read...~~
Reviewed in the United States on 7 October 2020
Verified Purchase
This is the second book I have read that was written by Mr. Bongino. It is written extremely well and the author has end notes that verify his written words. When reading this book, it was almost like a fictionalized account of corruption. How in the world did portions of our00governemnt sink to being so corrupt and evil? It actually made me sad to read some parts of it.

Being a Chief Petty Officer, USN, Ret, I was particularly interested in the chapter concerning General Michael Flynn. This chapter contains so many familiar names.....President Obama, McCabe, Yates, Rice, Kislyak, and so many more ..up to and including Judge Sullivan. This is still not resolved despite the efforts of Gen. Flynn's Attorney Powell. This chapter includes not only the events that occurred but also contains the 'why'. Three separate setups are also explained in detail. Seriously, it reads like something out of a fictionalized script for a movie...

Starting in the Ukraine, the author illustrates the corruption and sets the tone for the remainder of his book. Am still shaking my head over some of the details that are provided.

Many topics are covered including the attacks against Trump. All of the pieces are tied neatly together by the conclusion of this one. The entire gamut of corruption we have been living through these past few years is covered.

Another stellar read by this author and facts are presented...not lies. Truly appreciate the research that went into the writing of this book.

MISS K OWEN
5.0 out of 5 stars FUTURE GENERATIONS WILL USE DAN BONGINO'S BOOKS TO STUDY THIS TURNING POINT IN WORLD HISTORY....
Reviewed in the United Kingdom on 10 October 2020
Verified Purchase
.....& EVERYONE SHOULD BE PRAYING THEY'LL BE READING THEM IN THE HOME OF FREE & THE HOME OF THE BRAVE. SPYGATE, EXONERATED & FOLLOW THE MONEY ARE ALL YOU NEED TO UNDERSTAND WHAT IS, WITHOUT A DOUBT, THE WORST ATTACK ON WESTERN DEMOCRACY & CIVIL SOCIETY IN HISTORY. DAN BONGINO LAYS IT ALL OUT IN A WAY THAT IS EASY TO FOLLOW & UNDERSTAND. HAVING WATCHED/LISTENED TO 'THE DAN BONGINO SHOW' FOR YEARS, THE MAN'S INTEGRITY & PATRIOTISM IS CLEAR. HE HASN'T WRITTEN THESE BOOKS TO SMEAR PRESIDENT TRUMP'S OPPOSITION & MAKE HIM LOOK GOOD. IN FACT, I FEEL CONFIDENT IN SAYING IT WOULDN'T MATTER WHO WAS IN OVAL OFFICE, HE WOULD STILL BE WORKING JUST AS HARD TO SAVE THE COUNTRY WE ALL LOVE. WE'RE ALMOST OUT OF TIME. READ DAN BONGINO'S SPYGATE, EXONERATED & FOLLOW THE MONEY BEFORE IT'S TOO LATE.
Read more
17 people found this helpful
Report abuse

linda galella
5.0 out of 5 stars There WAS quid pro quo with Ukraine -
Reviewed in the United States on 6 October 2020
Verified Purchase
It was perpetrated by Joe Biden and, of course, not formally investigated. Bongino finishes what he started in his first two books and completes the picture of how deeply George Soros was involved in corrupting the 2016 election of Trump. He’s back at it for 2020, using millions of dollars to buy ad time on T. V. to spread false information about COVID and the President in swing states. He started all this back in March when other people of means were using their wealth to help - help purchase PPE, build respirators, provide food, etc. This is only the 1st chapter!

John Brennan is a link from earlier Dem presidents to Obama and the blatant misuse and corruption of the intelligence agencies of this country. The amount of disinformation that was spread by the intelligence agencies is really almost beyond comprehension. It was beyond the comprehension of the FBI & CIA for sure. The detail on their testimony is absurd - neither agency has a clue who a source is or if it’s valid. Truth is, they’re using each other’s lie as evidence! Two wrongs MOST DEFINITELY do not make a right!

The chapter on Obama’s fixer was most interesting and rather scary. This woman, Kathy Ruemmler, ran interference for Obama; not just from possible negative outside sources but also from inside the WH. Ruemmler had strong ties to Brennan, Clapper, Comey and Rice as well as working with the Clintons - BOTH of them. She represented Bill in his “I didn’t have sexual relationships” scandal. Representing sexual predators turns out to be a specialty for her. Read the book to find out who the pedophile/Spygate operator is.

Case Agent 1 and Mike Flynn chapters meld together with Stephen Somma being obsessively interested in General Flynn alongside paid operative Stefan Halper who’s also got a fixation about Trump’s former National Security Advisor; some weird bromance. Bongino moves on to carefully lays out the details to this story that shows Flynn was set up THREE times as Nat’l Sec Adv.

Other interesting bits include Schiff and his lies at the Whistleblower Debacle of a trial. That man is in it up to his unencumbered noggin. The pen ultimate chapter deals with the China virus and how it’s being used to thwart DJT in his efforts at re-election.

“Follow the Money” is a compelling read; well researched and documented, presented in an organized and accessible manner. Bongino’s writing is concise and not given to histrionics, triggering or emotional pandering. At 168 pages of text and 20 pages of notes and documentation, the book isn’t overwhelming. It is packed with information that many might not have every seen or heard before. I certainly learned a few new things; always a good thing📚
Read more
274 people found this helpful
Report abuse

Sharon
5.0 out of 5 stars Great read.
Reviewed in the United Kingdom on 17 April 2021
Verified Purchase
Another great book from Dan Bongino. If you want to know the truth read Spygate first, then read this book.
Read more
Report abuse

Judy S.
5.0 out of 5 stars Years of Dan Bongino's "Remember the Names," organized and simplified, a great read!
Reviewed in the United States on 8 October 2020
Verified Purchase
Listeners to the Dan Bongino Show podcast (bongino.com for details) may sometimes struggle to keep up with all of the interconnections and schemes perpetrated by the denizens of the DC swamp and their foreign fellow travelers.
In this book, he ties them all together, weaving the drips and drabs of information that have become known gradually over more than four years into a readily comprehensible whole. it is very readable, told in a narrative style, but interspersed with footnotes so you can delve into the original source material if you so choose. It is well researched and well documented.
If you read the Kindle version, you can click on a footnote and quite often find a live link to the web version of the article or report cited. Dan also ties this saga in seamlessly to his previous two related books, "Spygate" and "Exonerated," both of which I highly recommend.
There is an Audible narration available, read by Bongino (the entire book, not just the introduction). If you have both Kindle and Audible versions, you can try "immersion reading" where the narration and text keep pace with each other. Amazon's whispersync also allows you to switch between devices and never lose your place.
Why read this book?
The "Anti-Trump Cabal" and its activities, stunning as they are, are still only symptomatic of a deeper and more serious problem. This didn't all spring up the day that President Trump was elected, nor will it dissappear when he leaves the Whitehouse, whether on Innauguration Day in 2021 or 2025. The capacity for these abuses of power was honed over decades. It will not just go away.
This is a cautionary tale for the ages about too much power being wielded by unelected and unaccountable officials who scoff at even Congressional oversight. Rules (such as the Woods Procedures for obtaining FISA warrants) meant to protect us all, while still letting agencies have tools to pursue terrorists and organized crime were ignored or circumvented. Foreign governments and individuals were utilized to gather information, largely to serve political ends.
We need to be able to trust these agencies and that the rule of law applies equally in this country. Their actions have shaken that confidence. Exposing them is uncomfortable, but necessary.
Bongino has employed the investigative skills he used as a Secret Service agent, handling multinational fraud and money laundering cases to do the one thing that can unravel the most complex schemes. He "Followed the Money." As more details drip-drip-drip out, keep this book handy to refer back to. It is a great read and a great reference book.
Dan Bongino has done this country a great service in gathering and presenting this material. It is a labor of love, love for this country, love for his audience and love for his family, for whom he wants to preserve the freedoms we hold so dear. Share it with the people you care about.
- Judy the Archivist
Read more
205 people found this helpful
Report abuse
See all reviews
Back to top
Get to Know Us
Make Money with Us
Let Us Help You
And don't forget:
© 1996-2021, Amazon.com, Inc. or its affiliates