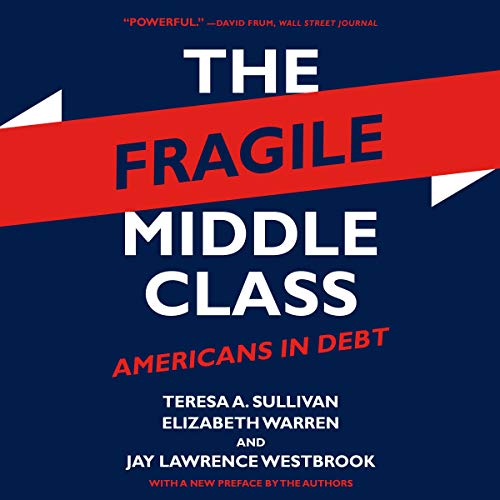 4.0 out of 5 stars
4 out of 5
6 global ratings
How are ratings calculated?
To calculate the overall star rating and percentage breakdown by star, we don’t use a simple average. Instead, our system considers things like how recent a review is and if the reviewer bought the item on Amazon. It also analyses reviews to verify trustworthiness.

Abacus
5.0 out of 5 stars Elizabeth Warren defends the Middle Class
Reviewed in the United States on 11 December 2011
Verified Purchase
Borrower's default on various credits and bankruptcy are pretty much Middle Class phenomenon (more than lower-income class). This makes sense as it takes a middle class income to get credit cards, auto loans, and mortgages. The truly poor don't have enough income to get credit and go bankrupt.

The Legislature has often treated this Middle Class phenomenon with laws to strengthen creditors' rights such as the Bankruptcy Reform Act of 2005. The latter made it more challenging for consumers to file for bankruptcy. It made it especially challenging to file Chapter 7 (complete discharge of debt); and, often rerouted debtors towards Chapter 13 associated with debt repayment plans.

Elizabeth Warren, a Harvard lawyer, has defended the Middle Class. She treats it not as an irresponsible dead beat; but instead as a victim of dubious creditors practices. As a result of her dynamic advocacy, the Legislature passed the Credit Card Act of 2009 to restrict credit card issuers abusive practices. And, she also implemented the Consumer Financial Protection Bureau (CFPB) to be a vigilant watch dog of nefarious financial service practices and improve the transparency of any consumer financial transaction.

From her collective researches compiled within this book, Warren derives numerous interesting insights. First, the data confirms that bankruptcy is a Middle Class phenomenon. The bankrupt filers are not so different than the general population in terms of income, education, assets, etc... And, she supports that with extensive graphs comparing the distribution of each variable. She also uncovers that bankruptcy rates have skyrocketed from 1962 to 1996. This trend is associated with an equivalent skyrocketing of consumer debt level burden measured by debt to income ratios, and a similar rise in foreclosure rates. That is where Warren advanced that credit practices in issuing credit cards and mortgages were occasionally egregious and taking advantages of naive borrowers.

Warren's findings (consumer debt unsustainable rise, rising foreclosure) were over 20 years prior to the recent financial crisis. In other words, from her research she could see that a perfect storm was brewing. And, she did express alarming concerns within a related documentary called  Maxed Out  that covered the abuse of the credit card industry. She also addressed this issue in  Inside Job .

In addition to abusive creditors practices, Warren discovered that medical issues were a major reason people filed for bankruptcy. Uncovered medical bills related to sometimes catastrophic medical events would cause the patient to pay the first few bills on his credit cards, and the second set on a home equity line. Pretty soon, the same person defaults on everything and loses a house to foreclosure, and has to file for bankruptcy. So, medical bills were the engine of credit destruction. Within Michael Moore's bonus features of  Sicko (Special Edition)  Warren goes on a 6 minute interview indicating how medical related bankruptcies not only affects the uninsured, it affects the insured as well! In 2007, she conducted with other social scientists an updated study on medical related bankruptcies. She found out that 75% had medical insurance! This same study concludes: "Medical impoverishment... is almost unheard of in wealthy countries other than the US. The US health care financing system is broken, and not only for the poor and uninsured. Middle-class families frequently collapse under the strain of a health care system that treats physical wounds, but often inflicts fiscal ones."

In view of the above, only people ignorant of how bad our current health care system is could defend it.
Read more
5 people found this helpful
Report abuse

Gregory McMahan
5.0 out of 5 stars Further Insight Into The Demography of Bankruptcy
Reviewed in the United States on 22 April 2007
Verified Purchase
In some ways, this is the authors' companion book to their excellent book, As We Forgive Our Debtors. The Fragile Middle Class is less academic than As We Forgive Our Debtors and focuses more on the people who fall into bankruptcy and less on the economics and supporting cast of players (creditors and legal system)that comprise the U.S. bankruptcy system. In this book, the authors could provide reasons for why some individuals find themselves at the mercy of the bankruptcy court. For the time-pressed, Chapter One, Americans in Crisis, aptly summarizes the contents of the book.

The book provides the reader with a comprehensive definition of what it means to be 'middle-class'. It also provides the key socio-economic reasons underlying bankruptcy. These are: income disturbances (which includes unemployment and under-employment), credit cards, illness, divorce and housing. One chapter each is devoted to these reasons. Throughout, the stated goal of the authors was to tell the reader what the portrait of the bankrupt can tell us about the rest of society.

The authors re-affirm the old refrain that economic insecurity has greatly increased in American society. Their work strongly indicates that by far the greatest culprit leading to bankruptcy is job loss, followed by divorce and/or illness. In many cases, as the authors demonstrate, more than one culprit may be at work in a particular bankruptcy.

Perhaps the most interesting thing I noted in reading the book was the juicy little tidbit on credit cards on page 128. While the authors readily admit that mere possession of a credit card will not lead to bankruptcy, they do insist that the level of such revolving debt (for which they define the tipping point toward bankruptcy as short-term debt exceeding one and a half times gross annual income) is critical, and take care to point out that the debts can keep on compounding (at twenty-four percent interest, compounded monthly) long after the cardholder has shredded his or her piece of plastic.

In sum, this book was a very readable introduction to bankruptcy among the middle class. The authors have once again cranked out another excellent study.
Read more
5 people found this helpful
Report abuse

Melina Burton
5.0 out of 5 stars I recommend this one
Reviewed in the United States on 3 July 2013
Verified Purchase
I had to read this book for a class. I don't like to read but I think this book certainly sheds a lot of light on the financial problems our society is facing right now. It's a must read.
Read more
Report abuse
See all reviews
Back to top
Get to Know Us
Make Money with Us
Let Us Help You
And don't forget:
© 1996-2021, Amazon.com, Inc. or its affiliates