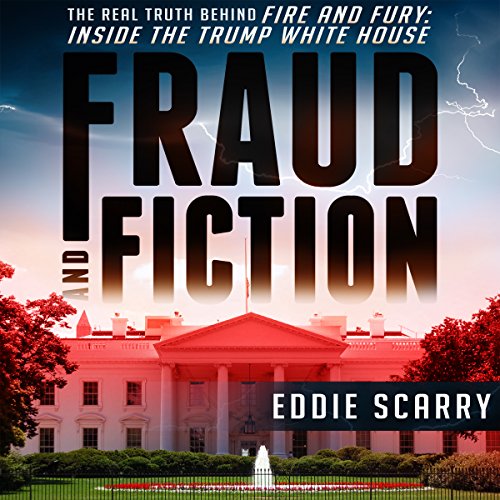 Fraud and Fiction: The Real Truth Behind Fire and Fury: Inside the Trump White House

4.9 out of 5 stars
4.9 out of 5
11 global ratings
How are ratings calculated?
To calculate the overall star rating and percentage breakdown by star, we don’t use a simple average. Instead, our system considers things like how recent a review is and if the reviewer bought the item on Amazon. It also analyses reviews to verify trustworthiness.

Miguel NV
5.0 out of 5 stars Fun read on the sad state of US media
Reviewed in the United States on 14 April 2018
Verified Purchase
This is a great read for anyone interested in media bias! Eddie writes with great wit and humor to expose how the mainstream media operate. No matter where you fall on the political spectrum, Eddie's exposing of Wolff's blatant disregard for basic journalistic standards will have you cringing and wondering why the media thought they too could join in on the lies.
Read more
5 people found this helpful
Report abuse

Michele Davis
5.0 out of 5 stars Where is the rest of the story.
Reviewed in the United States on 8 April 2018
Verified Purchase
I've heard more information on Fox News . Too short. I agree with the conclusions but was hoping for more. I'd never have paid 11$ for a commentary, I'll be counting pages become purchasing again.
This is a retraction. My Kindle malfunctioned and sent me too to end of the book. I take it all back and will finish the book and leave my review.
I'm sorry
Read more
6 people found this helpful
Report abuse

Doyle
5.0 out of 5 stars Clever and funny expose
Reviewed in the United States on 27 May 2018
Verified Purchase
This book was very enjoyable to read. The author made excellent points in a very humorous manner. I would recommend it both for its good points and to provide laughs.
Read more
2 people found this helpful
Report abuse

Brandon
5.0 out of 5 stars Five Stars
Reviewed in the United States on 14 April 2018
Verified Purchase
Great read, that sheds light on a book of lies.
Read more
3 people found this helpful
Report abuse