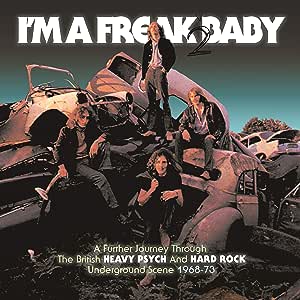 UK three CD set. Released in 2016, I'm A Freak Baby - Grapefruit's overview of the UK's late Sixties/early Seventies nascent hard rock/proto-metal scene - received rapturous acclaim from pundits and punters alike. And, like all good follow-ups, I'm A Freak 2 Baby expands upon the original while simultaneously tightening the stylistic mesh. In addition to further selections from some of the subterranean stars of the first volume, we feature many of the genre's pioneers, with key tracks from The Jeff Beck Group, Edgar Broughton Band, Atomic Rooster and High Tide. Our scope ranges from Top Five hit singles (Love Sculpture's manic, heavily influential 'Sabre Dance' and the original brass-free demo version of The Crazy World Of Arthur Brown's gothic masterpiece 'Fire') to a clutch of bands (Thor, Tonge, Tarsus and several others) that were active during our timeframe but didn't get beyond locally-recorded demos. We also feature tracks from some of the rarest albums of the era (Red Dirt, Leaf Hound, Dogfeet, Bodkin, Human Beast, Astral Navigations etc). During our journey, we stumble across Sabbath acolytes, Zeppelin wannabes, musicians' cooperatives, future legends, Satanism, shamanism, sham-Satanism, industrial-strength levels of reassuringly non-PC attitude and more cowbell than any sane individual could reasonably tolerate. Boasting a lavish 40-page booklet full of rare photos and memorabilia from the era, many recordings making their first appearance on CD and several cuts gaining their first-ever release in any format, I'm A Freak 2 Baby is another essential addition to Grapefruit's ever-increasing catalogue of UK late Sixties/early Seventies genre anthologies.

4.6 out of 5 stars
4.6 out of 5
46 global ratings
How are ratings calculated?
To calculate the overall star rating and percentage breakdown by star, we don’t use a simple average. Instead, our system considers things like how recent a review is and if the reviewer bought the item on Amazon. It also analyses reviews to verify trustworthiness.

Terry P.
5.0 out of 5 stars Excellent album just buy it
Reviewed in the United Kingdom on 14 September 2020
Verified Purchase
Got both I'm a freak baby album .Problem is I have ended up buying more music I missed wicked lady and tear gas great mixture worth every penny
Read more
Report abuse

De Paepe Freddy
5.0 out of 5 stars Great
Reviewed in the United Kingdom on 23 March 2019
Verified Purchase
Excellent
Read more
Report abuse
See all reviews
Get FREE delivery with Amazon Prime
Prime members enjoy FREE Delivery and exclusive access to movies, TV shows, music, Kindle e-books, Twitch Prime, and more.
> Get Started
Back to top
Get to Know Us
Make Money with Us
Let Us Help You
And don't forget:
© 1996-2020, Amazon.com, Inc. or its affiliates