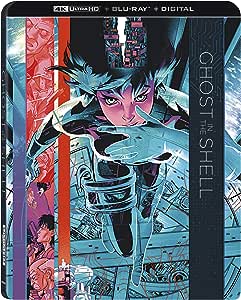 Buy 1, get 1 free from select TV titles offered and sold by Amazon AU.
Promotion will be applied at checkout. Offer expires at 23:55 PM (AEDT) on April 30, 2021 and while stocks last. (terms and conditions apply). Click to explore.

2029: A female cybernetic government agent, Major Motoko Kusanagi, and the Internal Bureau of Investigations are hot on the trail of "The Puppet Master,: a mysterious and threatening computer virus capable of infiltrating human hosts. Together with her fellow agents from Section 9, Kusanagi embarks on a high-tech race against time to capture the omnipresent entity. Director Mamoru Oshii's award-winning cyber-tech thriller, based on the comic book by Shirow Masamune, is lauded as one of the leading Japanese animation films of all time.

4.8 out of 5 stars
4.8 out of 5
1,037 global ratings
How are ratings calculated?
To calculate the overall star rating and percentage breakdown by star, we don’t use a simple average. Instead, our system considers things like how recent a review is and if the reviewer bought the item on Amazon. It also analyses reviews to verify trustworthiness.

Mariusz
4.0 out of 5 stars Weird release
Reviewed in the United Kingdom on 30 October 2020
Verified Purchase
It's an average release. I expected more from a 4K scan, thought it would be sharper, more detailed - it is, on some scenes, very good looking, but mostly I bet you'd have difficulty distinguishing it from a regular BD in a blind test. It's Dolby Vision, and the colors are indeed nice at times, but overall it's not so impressive (eg compared to recent Akira UHD release) visually.
Also - the UHD disc is region free (as all UHD discs are - it's just how this format is defined), but the regular Blu-ray is region A restricted, despite the back of the (rather cheap) box saying ABC (although who cares - no one buys this to watch regular Blu-ray anyway).
Then there's this bizarre decision to change the end titles music... not a deal breaker, but seriously - why?!
I'm glad to have this classic anime in 4K HDR quality overall, only I'd personally rather see some more remastering work applied to the video.

PS: I've seen some reports of video flickering during playback - none has been spotted while watching on my Panasonic UHD player and Philips tv, both supporting Dolby Vision.
Read more
4 people found this helpful
Report abuse

Joel Chivers
4.0 out of 5 stars Great conversion into 4K, however...
Reviewed in the United Kingdom on 25 September 2020
Verified Purchase
Played this on our 4K tv through the XBOX ONE S and the picture quality was great can't complain there. However the standard Blu-Ray disc wouldn't work on anything I tried it in (PC, XBOX PS4) due to region encoding (didn't realise that was still a thing for Blu-Ray, been buying them for 6 years and never had any issues with imports). The back of the case has the A B C region-free marker but I guess that only applies to the 4K disc and not the regular Blu-Ray.
Read more
3 people found this helpful
Report abuse

Emily Campbell
1.0 out of 5 stars UHD disk says corupted disk on playing.
Reviewed in the United Kingdom on 24 October 2020
Verified Purchase
This comes in a very cheap, very thin case that's so flexible that you don't even need to break the seal to get the disks out. So check your item before you keep it. There should be a slip inside for an American friend or family member to redeem a digital copy of the film but you will be out of luck.

Popped it in and boom disk corrupted error. will try another player.
Read more
One person found this helpful
Report abuse

polynekros
3.0 out of 5 stars Meh.
Reviewed in the United Kingdom on 5 November 2020
Verified Purchase
Don't get me wrong, if you don't own already this movie or if you are an anime collector/fan like me, i really think you should buy it. But the truth is that it's not a very good 4k transfer, for an animation movie. If you expect to see something in the quality and 4k sharpness like lets say Spiderverse, you will be deeply dissapointed. Image is good only in certain scenes ?!? don't know why. Audio is slightly better and it will mostly depend i believe, from your home theater set up. Overall, if you already own the bluray it's only a meh upgrade. Myself only bought it for collectors reasons and to display the artwork. 20 euros i will tell you is bit expensive just for display.
Read more
One person found this helpful
Report abuse
See all reviews
Back to top
Get to Know Us
Make Money with Us
Let Us Help You
And don't forget:
© 1996-2021, Amazon.com, Inc. or its affiliates