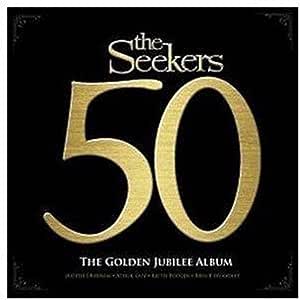 Secure transaction
Your transaction is secure
We work hard to protect your security and privacy. Our payment security system encrypts your information during transmission. We don’t share your credit card details with third-party sellers, and we don’t sell your information to others. Learn more
Details
Ships from
Amazon AU
Sold by
Amazon AU
New (5) from
$21.28 FREE Delivery on first order.

On December 3, 2012 The Seekers celebrate their 50th Anniversary. It will be fifty years to the day that Judith Durham started her new job at an advertising agency in Melbourne and met Account Executive Athol Guy who invited her to sit in with his mates Keith Potger and Bruce Woodley and perform in a little Melbourne coffee lounge called 'Treble Clef'. Fifty years on and The Seekers are still touching hearts and souls of fans. A golden jubilee is an extraordinary milestone made more so by the fact that The Seekers are still performing and recording in their original line up. Coinciding with this milestone, a brand new commemorative 2CD package is being released featuring 50 of the band's most popular songs including 'Georgy Girl', 'Morningtown Ride', 'A World Of Our Own' and 'I'll Never Find Another You'. The Seekers have also recorded two brand new tracks which open this unique '50 tracks for 50 years' Golden Jubilee Album. The Seekers have put their own stamp on the 1962 chart topper 'Silver Threads And Golden Needles'.

4.8 out of 5 stars
4.8 out of 5
284 global ratings
How are ratings calculated?
To calculate the overall star rating and percentage breakdown by star, we don’t use a simple average. Instead, our system considers things like how recent a review is and if the reviewer bought the item on Amazon. It also analyses reviews to verify trustworthiness.

Scraboman
5.0 out of 5 stars Worth buying for the first 12 tracks alone!
Reviewed in the United Kingdom on 5 July 2014
Verified Purchase
What a great joy it was to see the Seekers live in concert on their recent 50th anniversary tour. They sounded as good as ever and it was particularly wonderful to see Judith Durham performing again after her illness last year. She is a truly great singer.
I bought this just for the first 12 tracks because I already had all the others (and more) on the excellent collection  All Bound For Morningtown (Their EMI Recordings 1964-1968) , which I would also recommend.
The group sang many of these 12 tracks at their recent concerts and the great thing is that they are all just as good as anything they recorded back in the 1960s. They include great covers of songs like the Beatles' In My Life and the Bee Gees' Massachusetts and a lot of other excellent songs that were previously unknown to me like Gotta Love Someone, The Bush Girl, Far Shore and I Am Australian.
I appreciate the Seekers far more now than I did in their heyday when I was more into the likes of the Beatles, the Who, the Stones and the Kinks. Judith's uniquely beautiful voice supported by Athol, Bruce and Keith's harmonies add up to a sensational sound, and the songs themselves are just fabulous.
This album, together with All Abound For Morningtown and Judith's solo album  Colours Of My Life , are constantly on my playlist these days. However, if you just want one Seekers album, this Golden Jubilee album is probably the best choice.
Read more
9 people found this helpful
Report abuse

ptarmigan
5.0 out of 5 stars which needless to say are beautifully sung by Judith Durham
Reviewed in the United Kingdom on 15 September 2014
Verified Purchase
the sunshine sound of The Seekers celebrate their 50th with this album. it includes two new recordings, Silver Threads and Golden Needles and In My Life, which needless to say are beautifully sung by Judith Durham. the first CD has the new songs since their reunion. they have really grown on me particularly The Bush Girl. a very Australian song sung by Judith. Mention too, for The Shores of Avalon and the Far Shore both hauntingly beautiful songs. the second CD is a collection of favourites from the old days which fans will have in other collections. however, this is an album celebrating 50 years with 50 songs from an iconic group with a talismanic lead soprano with a heart melting voice. for this reason alone, it is a recommended buy in my opinion as they are unlikely to add to their discography
Read more
5 people found this helpful
Report abuse

MaggieP
5.0 out of 5 stars Memorable, Marvellous, Better Than Ever - The Fantastic Seekers !
Reviewed in the United Kingdom on 23 November 2015
Verified Purchase
Brilliant Album by a brilliant group. Judith Durham's amazingly mellifluent voice is so well blended with the "Boys" musicality & such a great variety of songs/music, both old and new. A trip down memory lane.
Not as good as being at their live concert in Royal Albert Hall was, but a real treasure of happy memories of a simply fantastic group.
Unsurpassable! Age has not changed this blend of great singers , musicians and songwriters. Even better now than 50 years ago !!!! A must have album for any Seekers fans.
Read more
One person found this helpful
Report abuse

meggger
5.0 out of 5 stars VERY GOOD
Reviewed in the United Kingdom on 5 June 2020
Verified Purchase
MANY YEARS AGO I DID NOT LIKE THE SEEKERS AT ALL 40 odd years ago

Richard Hargreaves
5.0 out of 5 stars Lovely Music
Reviewed in the United Kingdom on 16 July 2020
Verified Purchase
I have listened to the Seekers on and off over the years and these CDs don't disappoint. There is one song for each of the fifty years they spent together as a group. An excellent collection of songs.
Read more
Report abuse
See all reviews
Back to top
Get to Know Us
Make Money with Us
Let Us Help You
And don't forget:
© 1996-2021, Amazon.com, Inc. or its affiliates