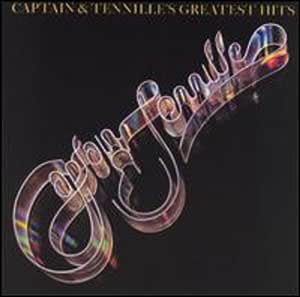 Perhaps no other song embodies the breezy, carefree sound of 1970s pop better than Captain & Tennille's smash hit "Love Will Keep Us Together." Both Daryl "Captain" Dragon and wife Toni Tennille were veterans of the music industry when they hooked-up in the early '70s. In 1975 the duo scored their first number one with the aforementioned confection (written by Brill Building vet and soft-rock kingpin Neil Sedaka), which also won a Grammy for Record of the Year. Captain & Tennille recorded several other hits during the decade, and in 1979 they reached the top of the charts again with "Do That To Me One More Time."

4.4 out of 5 stars
4.4 out of 5
42 global ratings
How are ratings calculated?
To calculate the overall star rating and percentage breakdown by star, we don’t use a simple average. Instead, our system considers things like how recent a review is and if the reviewer bought the item on Amazon. It also analyses reviews to verify trustworthiness.

Peter Durward Harris
5.0 out of 5 stars Great seventies pop
Reviewed in the United Kingdom on 1 March 2004
Verified Purchase
This couple never made much impact in the UK but had several huge hits in America, where Love will keep us together topped the charts. This particular compilation is a straight reissue of their 1977 greatest hits album, therefore misses all their later hits including Do that to me one more time. However, this is an excellent set, compiled from their first three albums.
Among the American hits here are Muskrat love (originally recorded by the group America), Shop around (a cover of a Miracles song from the early sixties), Love will keep us together and Lonely night angel face (both written by Neil Sedaka). Circles, Can't stop dancing, Come in from the rain, We never really say goodbye and Disney girls are also wonderful, as are the covers of Wedding song (Petula Clark) and I write the songs (Barry Manilow).
If you enjoy the music of the Carpenters you will probably also enjoy Captain and Tennille's music. Whether this is the best compilation to buy is debatable, given that several other compilations have since been released that includes their later hits. However, this is an outstanding collection of their early music.
Read more
One person found this helpful
Report abuse

Linda Williams
5.0 out of 5 stars Captain and Tenille
Reviewed in the United Kingdom on 27 November 2012
Verified Purchase
I was deligted to find this cd. It was for a part Christmas present. There was one particular track that related to a Holiday Wedding we witnessed on a beach in America.The gift was well received. I like to find individual things or memories for gifts and this was just perfect.Thank you Amazon
Read more
Report abuse

PLD Maga7
5.0 out of 5 stars Perfect
Reviewed in the United States on 29 March 2019
Verified Purchase
Condition was perfect, exactly as described. Wife will love this.
Read more
Report abuse
See all reviews
Back to top
Get to Know Us
Make Money with Us
Let Us Help You
And don't forget:
© 1996-2021, Amazon.com, Inc. or its affiliates