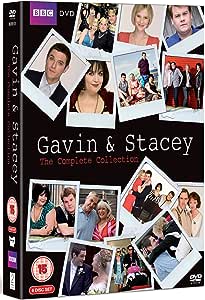 Gavin is an ordinary boy from Billericay, and Stacey an ordinary girl from Barry. After speaking on the phone to each other every day at work - they finally meet and fall in love... I won't lie to you, life is never quite that simple. For a start there are Gavins parents, Staceys mum and Uncle Bryn and best mates Nessa and Smithy to consider, as well as the small matter of living in different countries separated by a long bridge and a toll gate. Winner of two BAFTAs and four British Comedy awards, Gavin & Stacey is poignant, genuine and hilarious one of the stand-out comedyTV series of the 21st Century. Series One: Falling in love causes a ripple effect on Gavin and Stacey's family and friends. And as their wedding day approaches we soon come to realise that there's nothing 'ordinary' about the Shipmans and the Wests after all... Series Two: The honeymoon's over for the newlyweds, and their married life begins in earnest at the Shipman family home in Essex. But, as the reality of living so far away sinks in, Stacey starts missing her home in Barry Island along with her mum and her Uncle Bryn.Series Three: Gavin and Stacey have moved to Wales. Stacey couldn't be happier now shes back with her mum Gwen, her uncle Bryn and a daily diet of omelettes. Gavin on the other hand is adjusting to life in Barry, and although he won't admit it, he's missing his parents Pam and Mick and of course, his best friend Smithy. Smithy is bereft in Essex without Gav, and is trying to get used to the fact that his son, Neil the baby, is now living in a caravan with mum Nessa and soon-to-be stepfather Dave Coaches. Christmas Special: It's Christmas time and the Welsh contingent have been invited to celebrate the festive season with the Shipmans. So with the help of Dave and his coach; the West's head East. Dawn and Pete have come round for Christmas Eve drinks, and Pete's brought his aged mum

4.8 out of 5 stars
4.8 out of 5
1,367 global ratings
How are ratings calculated?
To calculate the overall star rating and percentage breakdown by star, we don’t use a simple average. Instead, our system considers things like how recent a review is and if the reviewer bought the item on Amazon. It also analyses reviews to verify trustworthiness.

Dingbat
5.0 out of 5 stars a must watch series
Reviewed in Australia on 20 July 2019
Verified Purchase
One of the best comedies of all time
Read more
Helpful
Comment Report abuse
See all reviews

Chainsaw Charlie
4.0 out of 5 stars Highly enjoyable
Reviewed in the United Kingdom on 6 March 2019
Verified Purchase
This review is for the boxset of all three series including the xmas special. Taking the series as a whole I highly enjoyed it and (even though it's been out for several years now and G & S are a household name amongst many people's TV viewing) as I've ever bothered to watch it when it was on TV previously, I was pleasantly surprised at just how good it is. Full of laugh out moments, a good mix of characters and some touching 'family values', it features some great British humour and sensibilities as well as a story arc of a love-hate relationship 'dilema' which faces 'modern' life-choices head on and doesn't pull any punches in how those issues may or may not be resolved. The first two series (and the special) are the best whereas I felt the third series (hence my four star rating) felt a little bit too hasty as the series which (because the writers always said it would be the last series) had to tie-up the loose ends and give an 'upbeat' note in its conclusion. The discs have a good amount of 'extras' on them and the boxset is exceptional value at its current low price. Re-live your favourite moments or give it a go if you've never seen it before - one way or another, I'm sure it will be comedy which will continue to make you laugh and smile in future years to come.
Read more
2 people found this helpful
Report abuse

Carl West
5.0 out of 5 stars Really funny
Reviewed in the United Kingdom on 1 September 2018
Verified Purchase
Great series, I didn’t watch it first time on tv so we got this dvd collection and didn’t regret it. All the characters are fantastic, and it’s well written and performed. The dvd boxed set is well made, although the 1st series has all episodes on one disc whereas the others are spread over two which seems a bit pointless.
Laugh out loud comedy at its best, Brynn is my favourite character and there are lots of memorable moments that we can all relate to.

G. HOLMES
5.0 out of 5 stars What Have I Been Missing?
Reviewed in the United Kingdom on 31 May 2013
Verified Purchase
I normally avoid contemporary TV sitcoms like the plague. Most of them are usually thirty minutes of unfunny torture for me with the usual gamut of old jokes and predictable dialogue. When `Gavin & Stacey`was first broadcast the usual self-censuring autopilot clicked in and I changed channel or left the room (upon losing control of the TV clicker as usual) as soon as the intro music started. I never saw any of it and clearly I just didn't know what I was missing.
However, all this was to change when I stumbled upon clips from the shows on YouTube whilst looking for something else to watch. Wow! Was I in for a surprise... I found myself laughing out loud and being charmed by the characters and the way they were being portrayed. I just had to get the DVDs because those illicit clips were just NOT enough.
I finished viewing the last episode of the third series last night, and I'm left feeling bereft. It is a bit gut-wrenching. Like emigrating and leaving all your family and friends behind because they will all be absent, and they won't be around any more. My crush on Stacey will have to wither and die, and my best mate Smithy has gone missing too. And everybody must know a `Nessa', I know I do. Pity there can't be a fourth series.
Six hours of glorious entertainment at a bargain price. A must have for anybody with chuckle muscles that are in need of a thorough workout.

GT247
5.0 out of 5 stars Still great fun.
Reviewed in the United Kingdom on 18 August 2018
Verified Purchase
Although the direction and camera-work is a bit dated it was really nice to catch up with this show. The extras are excellent with loads of docs and commentaries. It might be another 10 years before I watch it again but it was fantastic value for money.
Read more
2 people found this helpful
Report abuse

Ted from accounting
4.0 out of 5 stars Classic British tv comedy
Reviewed in the United Kingdom on 1 March 2020
Verified Purchase
This is a classic British comedy, the series wasn’t filmed natively in 1080P HD which is noticeable while watching this disc, I was, admittedly, unimpressed with the transfer until I saw a clip from the show presented in its original SD video format which made me realise that this blu-ray release yields quite an improvement
Read more
Report abuse
See all reviews
Get FREE delivery with Amazon Prime
Prime members enjoy FREE Delivery and exclusive access to movies, TV shows, music, Kindle e-books, Twitch Prime, and more.
> Get Started
Back to top
Get to Know Us
Make Money with Us
Let Us Help You
And don't forget:
© 1996-2020, Amazon.com, Inc. or its affiliates