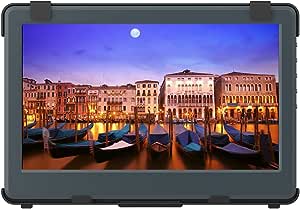 Visit the Gechic Store
3.2 out of 5 stars 8 ratings

GeChic 1102H Portable Monitor is designed for maximun mobility and portability with various applications such as laptop, chromebox, mini PC, compute stick and game console. GeChic 1102H not only supports rear port connector that allows wires to be hidden in the rear side of the monitor but it also has built-in 6900mah battery to solve the power limit. It has 1920x1080 resolution, 590g in weight, 1.1cm in thickness and dual built-in speakers. The GeChic 1102H is your excellent easy-carrying portable monitor choice.

3.2 out of 5 stars
3.2 out of 5
8 global ratings
How are ratings calculated?
To calculate the overall star rating and percentage breakdown by star, we don’t use a simple average. Instead, our system considers things like how recent a review is and if the reviewer bought the item on Amazon. It also analyses reviews to verify trustworthiness.

Z
2.0 out of 5 stars 修理依頼
Reviewed in Japan on 4 February 2018
Verified Purchase
ものとしてはかなり便利で最高。

TLDR;
* HDMI port worked for a week, then stopped working, then worked again.
* While using OSD (On Screen Display) for display settings (using the buttons on the side to change things like ration, resolution, etc.) the display would occasionally exit out of the settings OSD and then other text would appear on screen "Screen Booting" where I couldn't visit settings again until that "Screen booting" text went away. It was very annoying when trying to switch between (S)VGA and HDMI. I happend around once a week, and would often happen several times in a row, taking 5 to 10 minutes to stay working long enough to allow me to switch display and settings.
* Support with Amazon *seller* (here on amazon) was very good. Pre-sale questions asked and answers within 24 hours. Direct link to parts I wanted. Their advice was correct.
* Support from *vendor* (manufacturer of the device) was non-existant. Within 2 weeks of having it, I contacted amazon about a return, chose the "chat" feature, described the issues. They had no solution. Amazon opened a ticket with "GeChic" support, using an email address I provided them. Within 12 hours, I got an automated email with subject "Subject: Gechic has received your message!" but no other messages over ~1-2 weeks.
* I was hoping for something like a firmware upgrade or something to address this. No reply.
* I ended up returning this, hoping for better luck with a different model: GeChic 1503E : it has no battery, but maybe the battery was a cause for this "Screen booting" issue?
* Either the one I was shipped was defective, or this model has a problem
* Even with bad experiences, this "worked" better than an Eyoyo which stopped working within 10 minutes, and a Starto which was claimed to be "new" but had scratches indicating it was used.

My intended use:
* Portable display with battery to take with me to visit headless servers to use (with not provided folding USB keyboard and touchpad) to act as a "crash cart" substitute, as needed, windows servers, BSD Servers (console/tty), Linux(console tty and GUI with Window Manager): works
* Display for my usually headless Raspberry Pi: works
* (S)VGA to server: worked (Except for OSD settings "screen booting" issue
* HDMI: worked then stopped working, then worked again on a laptop and a server.

Pluses:
* Battery pack for avoiding power-cable when visiting servers
* Side-port HDMI port 1 works for HDMI
* Side-port VGA/SVGA port 1 works (after buying adapter / cable not included)
* When connected to both HDMI 1 and VGA 1 (HDMI 2 is for the rear port which requires a different adapter) it is possible to switch between VGA 1 and HDMI 1 ports using display's right-side buttons
* When power to one video source is lost (such as cable disconnect, reboot, or OS moves to power save video with "blank screen" , the display automatically switches to the other video port if it has power and signal.
* On connection to video, auto-tune determines resolution and refresh rate and prints them in OSD which eventually disappears
* Support from seller (online in amazon) was less than 8 hours: I asked a product question: where to buy VGA adapter/cable, and they provided a link to a cable that worked
* The provided "protective case" doubles service as a stand to hold the display as a "landscape" or "portrait" and supports a few angles, but if you exceed the angle away from vertical towards a horizontal angle, eventually the stand won't keep the shape. However, angles supported cover most of my use-cases.
* Manufacturer provided HDMI adapters: (full size), (mini), and (micro)
* Manufacturer provided USB power cable which appears to have 2 USB A connectors on one end with a claim that each can be plugged into a different USB port on different USB hubs when power-providing USB ports only provide 1 amp each , to combine enough to provide the 1.7 amps vendors says display requires.

minuses:
* Price
* Motion artifacts (like blur) when video displayed has *very* quick motion: not an issue for my use-cases
* The back-display adapter (sold separately) to activate a second HDMI port does not appear to also support a second VGA port.
* The protective case / stand has knobs to help lock a screen in-place, but it looks like these pieces can be removed and could easily get lost
* Provided USB cable for power is shorter than I would prefer.
* Provided video cables are shorter than I would prefer.
* Screen occasionally gets stuck in a loop "screen booting" then finishes, then allows me to navigate the display settings using buttons on the side, and on-screen text, but while navigating to screen settings to make changes, the screen "reboots" and I have to start over to try to be faster. Contacted Amazon to arrange a return, they related my issue to "GeChic" support, I received an automated email reply from GeChic within 24 hours ("Subject: Gechic has received your message!") , but no follow-up. It has been around 2 weeks. I may return this next week if not resolved. I've tried 3 different video cabled (2 other HDMI and 1 other VGA) but none help.
* I'm returning it. The "Screen is booting" issue (see above) has not gone away. It sometimes happens right after OS has booted. Has only happened when using VGA to a computer, I've tried different VGA cables and different computers, but this still happens. Maybe there is an issue where it tries to switch to battery then back to USB power and that triggers a "Screen is booting" issue? Maybe a defect?
* Other than these issues, it worked okay. It worked well enough, I am going to try another model from the same manufacturer. (GeChic 1053E : it has no battery, but maybe this "screen is booting" issues won't happen on that.)

Unknown:
* I did not test it with any MacOS devices yet
Read more
4 people found this helpful
Report abuse

Stro
1.0 out of 5 stars Bad experience. Never got it to work...
Reviewed in the United States on 29 July 2018
Verified Purchase
Upon powering up from out of the box, the device went into an endless reboot. I tried everything from the troubleshooting with no luck. For nearly $400 that's not acceptable. I was really looking forward to trying this device as there is nothing it really compares to in terms of size, build, overall functionality, built in battery, etc.

I think now I will try a completely different brand for half the price, as this investment put a bad taste in my mouth for this brand. I do hope others have a better experience if you decide to purchase this device.
Read more
4 people found this helpful
Report abuse
See all reviews
Back to top
Get to Know Us
Make Money with Us
Let Us Help You
And don't forget:
© 1996-2021, Amazon.com, Inc. or its affiliates